Posted in: Disc Reviews by Gino Sassani on February 26th, 2014 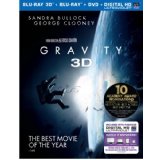 Remember the tagline in Alien? “In space no one can hear you scream.” Gravity begins, appropriately enough, with complete silence. We’re treated to a rather spectacular view of the Earth from orbit. Eventually chatter begins to intrude upon our revelry. We soon meet the crew of a space shuttle mission to do repair work on the Hubble telescope. We quickly learn that this is the final mission for retiring astronaut Matt Kowalski, played by George Clooney, although I certainly consider it a bad sign when he’s told to enjoy his last walk. He’s acting as a mentor of sorts to younger astronaut Ryan Stone, played by Sandra Bullock. There are others on the mission, but we’re treated to very little time with them. In a short time, they won’t really matter.

All is going along pretty much routinely. Clooney’s telling tall tales to both Ryan and the “voice” from Houston, which is instantly recognizable as Ed Harris. Things begin to get a bit tense when it’s learned that the Russians have torpedoed one of their satellites, but there’s apparently no cause for alarm. Obviously these guys didn’t watch the IMAX special Space Junk and don’t know about the Kessler syndrome. Don’t worry if you don’t know what that is. You’re about to find out, although they do not use the term in the movie. Needless to say the stuff hits the fan when it’s discovered that the collision has initiated a chain reaction of other collisions, causing a huge debris cloud to charge in the direction of the shuttle and the astronauts like a hurricane in the Gulf of Mexico. Suddenly routine turns to panic as the workers attempt to disengage from their work and attempt to get to safety before the debris gets to them. I don’t think I’m revealing too many spoilers here when I tell you that they’re not going to make it. After a thrashing that destroys the shuttle, Matt and Ryan are the only ones left alive. The problem is they have nothing but their space suits. The shuttle’s trashed, and they don’t have much air, let alone a ride home.

At first glance Gravity appears to be nothing more than a typical shipwreck kind of film. Certainly all of the good elements of that kind of movie are present, with the possible exception of a soccer ball for company. But this shipwreck movie is incredibly claustrophobic. We are reminded in the beginning that life in space is impossible. Ryan survives by the grace of a few layers of fabric and a glass faceplate. That’s where the beauty of the whole thing starts coming together. Director Alfonso Cuaron makes excellent use of his minimalist environment and delivers one of the best films of the year.

The presence of Ed Harris, at least in voice, is a wonderful tribute to two of the best space films to have ever been made. He’s a veteran of both The Right Stuff, where he portrayed John Glenn, and Apollo 13, a bit of a disaster-in-space film itself. But this is not either of those films. They both treated space exploration as a grand adventure, the final frontier. Gravity treats space as more of a routine job. There’s little wonder in these characters as characterized by Matt’s silly banter in the beginning of the film. These folks are punching a clock, a clock that just so happens to be a few thousand miles in space. One of the reasons the two shuttle disasters had the impact that they did is because space orbit exploration has become a bit mundane to the general public. Cuaron takes advantage of that attitude and sets us at perfect ease at the start. He thrills us with incredible vistas of the Earth and lulls us with the casual atmosphere of the mission. Matt likes to start his tall stories with “Houston, I have a bad feeling about this mission.” The possibility of a catastrophic failure is remote enough to be the subject of humor…until it’s not. Some may even find this intro segment to be a bit boring. It’s all part of Cuaron’s trap, and I fell into it just like the rest of the lambs to slaughter. I was so busy admiring the view that I almost forgot that things were going to go bad…really bad at any moment. Credit a good director for making it a shock when he delivers something we knew was coming before the lights went dark in the theater.

Gravity is presented in its original aspect ratio of 2.40:1. The 1080p image is arrived at with an AVC MPEG-4 codec at an average 25-30 mbps. Unfortunately, Warner did not send us the 3D version of the film. Having seen it in theaters it is my opinion that the 3D is absolutely necessary to tell this story. It provides a frame of reference in an environment that has none. I can’t tell you if the home version achieved that result. It just wouldn’t be fair to talk about the 2D version without that perspective.

The DTS-HD Master Audio 5.1 is a vital part of this presentation. Sound is a key to immersing oneself in this film. The surrounds might not be terribly aggressive, but they are as effective as I’ve experienced. You get a lot of Stone’s emotional read through her breathing. It’s more important than the score to drive the emotions as they change from scene to scene. From hushed breaths to rapid hyperventilation, this sound design pierces our senses from our system. The actual score consists of human voices altered to create odd and, at times unsettling sounds. There are also rare glass instruments that completely capture the feel of open space. The dialog comes through in its claustrophobic spaces perfectly. The subs give you that extra push from time to time, while the surrounds offer just enough to complete the illusion.

Gravity Mission Control: (1:46:36) This is a very inclusive multi-part feature that allows you to play the nine sections individually or with a handy play-all. These sections touch on every aspect of the production. This is one of the best behind-the-scenes features I’ve encountered. There’s more than just the cast and crew sound bites. The film created some unique new ways to make a film, and you get a front seat to it all. There’s the LED lightbox set that allowed the actors to simulate what would later be on screen. We get plenty of pre-viz and conceptual art. I can promise you that you’ve never had a peek at this kind of filmmaking before. It’s well worth your time.

Aningaaq: (10:10) This is a short film that allows us to see Stone’s radio conversation with the unknown man from his perspective.

Collision Point – The Race To Clean Up Space: (22:28) This documentary is narrated by Ed Harris. It’s a look at the Kessler Syndrome we talked about in the review and the documentary Space Junk. The piece is made to be a companion to the film and features some clips and cast and crew input.

It’s the surprise winner of the year. It’s not Open Water in space. Well, it is if Open Water had been, you know… really good. There also don’t appear to be any sharks in space. This one’s a must see. “Do it now!”

Gino Sassani is a member of the Southeastern Film Critic's Association (SEFCA). He is a film and television critic based in Tampa, Florida. He's also the Senior Editor here at Upcomingdiscs. Gino started reviewing films in the early 1990's as a segment of his local television show Focus. He's an award-winning recording artist for Omega Records. Gino is currently working on his 8th album Merchants & Mercenaries. Gino took over Upcomingdiscs Dec 1, 2008. He works out of a home theater he calls The Reel World. Favorite films: The Godfather, The Godfather Part II, The Body Snatcher (Val Lewton film with Karloff and Lugosi, not the pod people film), Unforgiven, Gladiator, The Lion King, Jaws, Son Of Frankenstein, The Good, The Bad And The Ugly, and Monsters, Inc.
Jamesy Boy You Will Be My Son (Blu-ray)