Posted in: Disc Reviews by Gino Sassani on February 25th, 2014 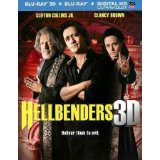 It has been said that an old vaudevillian was on his deathbed and was asked how he was doing. He replied, “Dying is easy. Comedy is hard”. And no, it wasn’t Shia LaBeof. The fact is that comedy is easy. Horror comedy is hard…very hard. One needs only to look at the lame attempts each year to make us laugh at the carnage. For every Shaun Of The Dead there are 100 Vampire In Brooklyn‘s Let’s not even talk about the last Scream entry. Needless to say I was quite a bit overwhelmed when I received Hellbenders 3D. Not only was this some cheap Exorcist knockoff, but it was going to be low-budget 3D. I watched it the night before a surgery figuring it was the most likely film to make me actually look forward to the surgery. Let’s face it. You see this stuff coming from a mile away. What I never saw coming was that I had one hell of a good time watching. I’m not going to call it a classic by any means. But Hellbenders delivers like few horror comedies I’ve seen in a very long time.

The concept is so basic and simple that I’m amazed no one has thought of it before. The end result is a kind of originality lacking even in the big-budget world. Enter The Augustine Interfaith Order of Hellbound Saints. These are holy men (and women) who take one for God. They commit themselves to being “damnation ready” by stacking up the sins they commit. There’s plenty of debauchery, heresy and partying going on in their rectory. They check off Ten Commandments and Seven Deadly Sins like they were ordering flavors at the local Ben & Jerry’s. You’ve seen enough exorcisms to know how that works. The holy man entices the demon to take over himself, and then he jumps out of a window. But there’s a flaw to that solution. Holy guys are going to Heaven and can’t take a demon with them. By being damnation-ready, these guys can take a demon straight back to Hell. It’s so simple it’s ingenious. They have a “bat-phone” straight to the Bishop and are dispatched to rid the parish members of their demons, literally.

The Hellbound Saints are led by Angus, played by Clancy Brown. He’s got the maps and charts that tell him something big is going down and he needs to whip his team in shape by getting them to sin more. Not those misdemeanor small sins…the big ones: murder, infidelity, and serious fornication. His right hand man is Lawrence, played by Clifton Collins, Jr. He’s the smart one and the most conflicted. He has a wife, and she’s not too happy with his dedication to the Hellbound Saints. He’s going to have to make a choice. The Wire’s Andre Royo plays Stephen. He’s the straight man of the group. He keeps the books where all of the sins are recorded. Royo has the hardest role in the film. He has to maintain a straight face with all of this silliness and madness going on around him. Elizabeth, played by Robyn Rikoon, is the lone female member of The Saints and ends up getting possessed because she wasn’t ready to take on a demon. Macon played by Macon Blair is the bungler of the group and gets to spend a significant amount of the movie in a body cast. There’s also Erik, played by Dan Fogler.

It’s the time of a new Pope, and times are changing within the Church. Enter Clint (Gevedon) who is sent by the new church administration to shut the Saints down. Of course, there’s an apocalyptic event brewing as the demon Surtr is now roaming the Earth intent on opening that nasty gateway to Hell that so many television and film demons before him have tried to do. There’s a showdown coming and, of course, only The Saints have the chutzpah to save the world from eternal damnation.

I have to say that I’m in love with the concept. The idea of a group of people sinning for Christ is outrageous and funny. Still, this is a concept that could have gone terribly wrong from the start. The first thing that saves the day is a pretty solid cast. There’s no real winking at the audience at all here. The film does enough of that with the whole premise that the actors really don’t need to do so. Everyone is playing their characters to the hilt. There’s enough investment in the performances that you end up buying into all of the zaniness.

It’s also helpful that director J.T. Petty knows just how far he can push it without going too far. Of course, everything about this film is over the top, but Petty manages to avoid the “in for a penny in for a pound” temptation that would have resulted in a manic mess. The script is skillful with the religious images here. Certainly, he’s poking fun at religion and the Catholic Church in particular. But he’s careful to include the other faiths so it doesn’t ever appear one-sided. The attacks never come across as mean-spirited and will just be taken as a good laugh to all but the most sensitive members of the audience. And in the end there’s actually a positive religious message hidden in all of the debauchery that these guys really are dedicating their lives to Christ, albeit in a rather unorthodox way. In the end, they are true believers willing to die for their faith.

The film is actually a dual-mode affair. There are times when we see footage of some of the “odd” events building up through amateur cameras. There’s interviews with “experts” that are all my least favorite parts of the film. I know Petty was going for a particular style here, but he’s always better off when the camera is focused on his capable cast. He doesn’t appear to understand that he has something good here and we don’t need or want the distractions the documentary stuff adds.

The f/x are actually better than the usual low-budget crap we get on these direct-to-video nightmares. Gore fans will have their fill of broken fingers and mutilated bodies. A lot of this stuff is done with practical effects, which I almost always find more convincing. There are absolutely some wince/ouch moments here. In addition there are some very funny moments that owe more to originality than the gag itself. It’s best to see this one with friends.

Hellbenders 3D is presented in its original aspect ratio of 2.35:1. The high-definition 3D image is arrived at using the standard duel MVC codec at an average 35/14 mbps. Surprisingly, this is not as gimmicky a 3D film as I expected. There are definitely some nice atmosphere moments here and not near as much of the stick-in-the-eye kind of thing. The image contains some rather nice texture that helps to immerse us in this gritty environment. It’s very much shot like a documentary but actually by good documentary cameramen. None of that shaky crap. Colors tend toward the warm side. The interior shots of the Saints are pretty realistic in lighting and color. Again, there’s almost a documentary flavor going on here. Black levels are average. They are clean but lack any real life or shadow definition. This film might have actually benefited from the slight grain of film but was, of course, shot in digital. It was shot in native 3D and is not a converted presentation.

The DTS-HD Master Audio 5.1 is actually pretty sweet. The surrounds are used to good effect by putting an edge on the demon voices and the usual creaking and groaning stuff going on around us. The score never intrudes, and dialog is pretty much front and center, just not always so clear and crystal. That’s another element of the documentary angle that has the characters often talking quickly in not the best acoustic conditions.

There’s an Audio Commentary with J.T. Petty, Clancy Brown and Andre Royo. It’s all pretty much conversational with plenty of anecdotes but little real information.

You get both the 3D and 2D versions on the same disc.

God’s Dirty Work – The Making Of Hellbenders: (26:22) Cast and crew offer up a bit of tongue-in-cheek sound bites on their characters and the film’s premise. Clancy remains in character all of the time. Plenty of information on casting, the story and production design.

Fly On The Wall – Behind The Scenes Footage: (7:29) This is raw behind-the-scenes footage with no narration or intercuts with interviews or clips.

Original Exorcism Short Films: (28:14) Petty put the word out over at Bloody Disgusting that he wanted exorcism videos. He wanted them to be of a different look than the rest of the film. Many answered the call, and here’s a collection of them.

There’s just a ton of potential here. I certainly don’t feel like I’ve had my fill of these characters and this story. This is Ghostbusters for a new era, and while it might not have that made-for-box-office largess, I think the film actually holds up with repeated viewings. I put the film in to check out the 2D version with the intent of just watching for a few minutes for comparison. Before I knew it the credits were rolling, and I had watched it for a second time. The 90 minutes cruise by and entertain the entire journey. Petty knows what it takes to make an entertaining low-budget film. “It’s a ritual that requires training and faith.”

Gino Sassani is a member of the Southeastern Film Critic's Association (SEFCA). He is a film and television critic based in Tampa, Florida. He's also the Senior Editor here at Upcomingdiscs. Gino started reviewing films in the early 1990's as a segment of his local television show Focus. He's an award-winning recording artist for Omega Records. Gino is currently working on his 8th album Merchants & Mercenaries. Gino took over Upcomingdiscs Dec 1, 2008. He works out of a home theater he calls The Reel World. Favorite films: The Godfather, The Godfather Part II, The Body Snatcher (Val Lewton film with Karloff and Lugosi, not the pod people film), Unforgiven, Gladiator, The Lion King, Jaws, Son Of Frankenstein, The Good, The Bad And The Ugly, and Monsters, Inc.
3 Days to Kill Jamesy Boy