Posted in: No Huddle by Brent Lorentson on February 27th, 2014 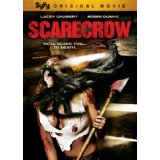 Let’s be honest, anytime you hear about a SyFy original movie, expectations are lowered, and you settle in for what is most likely going to be a forgettable, cheesy film.  But sometimes a film comes along, and it manages to take you by surprise, and you just have a good time with it, and not at the film’s expense (Sharknado, I’m looking at you).  When it comes to where Scarecrow falls, well, this is one of those fun little films that captures the spirit of some great 80’s monster films; Pumpkinhead continually came to mind while watching this.

It’s almost time for the town’s annual Scarecrow Festival where everyone gathers around to celebrate the tale of an urban legend that goes back over a hundred years.  Unfortunately for a few students who are in detention, they get to spend their time helping clean up an old farm.  Stuck looking after the students is Aaron Harris (Robin Dunne) who just so happens to have dated Kristen (Lacey Chabert), the current owner of the farm he and the students are going to work on.

No time is wasted as the Scarecrow emerges from the surrounding corn fields and begins to dispatch the students and everyone else that crosses its path.  As for the look of the villainous character of the Scarecrow, I really dig the creature design here.  Instead of seeing some ridiculous straw stuffed creature, we instead get a creature that manipulates the roots and vines and forms a menacing figure that can travel beneath the soil and through walls so long as there is a sort of vegetation for it to control.

As everyone takes shelter in the farmhouse, they realize without a signal on their phones the only way they are going to get help or escape is to do it on their own.

What kind of gave me a moment of pause was the fact the characters that have seen the creature arm themselves with guns and knives, but no one immediately goes for weed killer.  Sure, it sounds like I’m just kidding around, but the creature is basically a plant, so why wouldn’t that work?

Most of the characters here are simple and serve no other purpose than to be just another victim for the Scarecrow to dispatch.  The exception goes to Beth (Brittney Wilson); at first glance she’s just your average troubled teen with some depressing family issues, but really, this girl is a survivor, and though her attempts to sacrifice a character to save herself and the group seem a bit harsh, really I feel Beth is the only character with any common sense in the group.  Sure, we’ve seen these types of characters before, but in this film she seems to be the only one asking the right questions; after all, when it’s discovered the Scarecrow came from the property owned by Kristen only Beth holds her responsible, while the rest of the group plays dumb and wants to protect Kristen.  This is frustrating, because it’s as though simple logic was ignored. Several innocent people are killed, yet it’s the sole survivor of the bloodline responsible for the thorny monstrosity who we are supposed to root for.  If that were not enough to make Kristen unlikeable, simply factor in she’s Aaron’s ex and is trying to get back into his good graces after he’s just recovered from getting over her.  If anything, Kristen should be the girl we should be looking forward to the Scarecrow getting his sharp little splinters into.

The highlight of the film comes along in the final act as the remaining survivors combat the Scarecrow in a creepy-looking boat graveyard.  This is just one of those cool creepy locations that are just meant to be in a horror film.

What helps make Scarecrow work is that it is a good-looking film.  The use of fog and finding great exterior locations gave this a look that added to their production value. Sure, there is plenty of CGI work, but it doesn’t get in the way of the visual style of the film, and the effects are never overdone, which is something the film was wise to avoid.  Along with the good-looking cast, everything comes together to make this a predictable yet fun film.  Though it falls in the same vein as Jeepers Creepers and Pumpkinhead, I wouldn’t say it’s as good as those films, but it still has its fun qualities.

Brent Lorentson is a horror writer and film critic based out of Tampa, Florida. With a BA in Digital Film, he co-wrote and co-directed Scavenger Hunt. His short stories have appeared in various horror anthologies. In 2019 his short script Fertile Blood will be a part of the anthology horror film Slumber Party. He is currently working on his first novel A Dark and Secret Place set to be released in late 2019. Favorite Films: Taxi Driver, Fight Club, I Saw the Devil, The Wild Bunch, Dawn of the Dead, A Clockwork Orange, Pulp Fiction, Heathers, The Monster Squad, and High Fidelity.
Legit: The Complete First Season Non-Stop