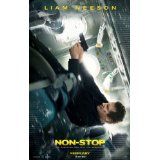 “I know it may seem scary, but flying really is quite fun.”

I respectfully disagree. Air travel is terrible. The seats are too small, the air is stale, there’s hardly any leg room, and the food stinks. (Assuming you even get food.) And I haven’t gotten to the part where you’re hurtling through the sky at hundreds of miles per hour at more than 30,000 feet. Ok, so maybe I enjoy air travel a lot little less than some of you out there, but I think we can all agree airliners provide an inherently tense setting for a variety of stories. We’re talking everything from Air Force One to Snakes on a Plane. So while flying may be awful in real life, it’s a reliably thrilling time at the movies.

Non-Stop is the latest entry in Liam Neeson’s wonderfully unexpected, late-career re-invention as a grim action movie badass. (I mean, who knew Oskar Schindler had this particular set of skills?)

“How do you kill someone on board a crowded plane and get away with it?”

Excellent question! Neeson stars as down-on-his-luck air marshal Bill Marks. The movie makes it a point to illustrate the “down-on-his-luck” part even before we learn Bill is an air marshal. We meet him as he’s staring longingly at a liquor bottle prior to boarding a New York-to-London flight. With the plane somewhere over the Atlantic, Bill begins to receive a series of mysterious text messages. The person at the other end of the phone claims someone on the plane will die every 20 minutes unless $150 million is transferred into an off-shore account. So much for “airplane mode.”

It’s a killer, Agatha Christie-esque premise for a thriller, and the filmmakers — director Jaume Collet-Serra, along with writers John W. Richardson, Chris Roach and Ryan Engle — have fun with audience expectations early on. Bill’s fellow passengers are a roll call of the types of people you’re likely to see on your next flight. In addition to Jen (Julianne Moore), the chatty, friendly woman who takes the window seat next to Bill, there’s Guy Who is Obnoxiously Loud on his Phone and Takes Forever in the Security Line (Nate Parker), as well as a Vaguely Middle Eastern Passenger (Omar Metwally) and the Racially Profiling Hot Head (Corey Stoll) who gives him the side-eye. There’s even a Little Girl Traveling By Herself.

Except for the little girl (NON-SPOILER ALERT), pretty much all those passengers turn out to be something different. Collet-Serra’s camera glides along the plane’s cabin as Bill frantically tries to find the would-be killer. Non-Stop does a strong job of putting us in Bill’s paranoid state of mind. As a result, every passenger who glances down at his or her phone looks shifty. Heck, even the plane’s crew — which includes Downton Abbey’s Michelle Dockery as a flight attendant — isn’t above suspicion. The film also doesn’t shy away from silence; a few early sequences feature little dialogue and rely heavily on text bubbles. Collet-Serra and his writers even have some fun with these text bubbles, like having a cracked cell phone screen conceal a curse word (and preserve Non-Stop’s PG-13 rating).

The central mystery in Non-Stop is actually very engaging, especially when the killer finds increasingly creative ways to make good on the threat to produce a dead body every 20 minutes. I enjoyed trying to guess the killer’s identity along with Bill, who becomes more and more unglued as the corpses pile up. Unfortunately, the horribly preposterous final act of Non-Stop makes the preposterous final act of Unknown — the previous collaboration between Neeson and Collet-Serra — look brilliant by comparison. It’s always a much bigger bummer when a movie screws up its ending, as opposed to the beginning or middle; it’s like a gymnast botching the dismount.

Neeson, as he’s done with each of his post-Taken Euro action thrillers — elevates the material with his deadpan intensity and his “serious actor” credibility. Although Non-Stop is more of a psychological thriller and less of a straight-up action flick than its poster suggests, Neeson does get up to some of his butt-kicking tricks. Collet-Serra uses his airplane set amusingly. One of the hand-to-hand bouts takes place in the impossibly-tight quarters of the plane’s restroom; later, Bill uses the chord from an oxygen mask to fight off a bad guy. Meanwhile, Moore has an easy rapport with Neeson, even as you’re wondering why an actress of her stature would take such a seemingly generic role. I also enjoyed Stoll and Argo’s Scott McNairy as two of the passengers who bear the brunt of Bill’s paranoia.

For a while, Non-Stop flies as high as any aerial thriller, but the terribly hokey and disappointing reveal in the final act brings the movie crashing back down to earth. Even though “long flights are the worst”, this movie remains a relatively easy suspense flick to enjoy.