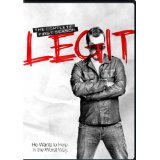 At first glance, Legit simply looks like an amalgamation of every successful (non-animated) comedy on FX. It’s got the bro-humor of The League along with the willingness to push the boundaries of good taste of It’s Always Sunny in Philadelphia, and it’s all centered around a comic playing a loosely-fictionalized version of himself (like Louie). So what does comedian Jim Jefferies bring to the table that’s new? I’d say it’s a refreshing amount of sloppy, unshowy heart. The show is nominally about the Aussie comic trying to make it big in Los Angeles, but it’s really about Jefferies and his inner circle becoming “legit” human beings.

“I just have a fondness for prostitutes and disabled people.”

Jefferies (in the role he was born to play) stars as “Jim Jefferies”, who lives in a chronically unclean house with responsible best friend/roommate Steve (Dan Bakkedahl). Steve’s brother Billy (DJ Qualls) has muscular dystrophy and is confined to a wheelchair. In the pilot, Billy begs Jim to help him get laid for the first time. So Jim does what any good friend would do: he arranges for Billy to hook up with a prostitute, much to the chagrin of Billy and Steve’s gratingly overprotective mom Janice (Mindy Sterling). Billy eventually moves in with Jim and Steve, and the trio gets into a variety of adventures that involve dating, baseball, botched drug heists and more.

As you can see, Legit has a pretty good recipe for solidly raunchy humor. However, the show also operates with a pleasingly loose rhythm that’s the opposite of comedic movies and TV shows that work overtime to shock their audience. Prostitutes and other “sexcapades” play a pretty prominent role throughout season 1’s 13 episodes — including a running joke about how well-endowed Billy is — as does the show’s fair, funny, and no-frills treatment of people with physical and mental handicaps. (One of these people — Nick Daley’s fun-loving Rodney — happens to be the show’s best recurring character, and they all get the spotlight in Ep. 10/“Cuckoo’s Nest.”). Still, Legit is mostly a ready-built showcase for Jefferies’ brand of humor.

In case you’ve never seen him, Jefferies sort of resembles a paler, schlubbier version of Justin Theroux. (To his credit, Jefferies incisively examines his own schlubbiness in Ep. 7/“Health”, where he laments that he’s too fat to get “hot guy” roles but not fat enough to get “funny fat guy” roles. Unlike Louie or Seinfeld, there are no stand-up comedy segments of Jefferies doing his act. (His character in Legit has achieved some success, including an HBO special and occasional recognition from fans around town.) Instead, Jefferies unleashes his observational humor to a variety of sounding boards, including a classroom full of impressionable kids and a homeless guy.

Jefferies seems to take most of his comedic inspiration from the likes of George Carlin. In Ep. 12/“Misunderstood”, Jefferies even tries to prove that rape can be funny, which is a totally Carlin thing to do. My favorite riffs included the idea that attractive women have no idea what drinks cost, the absurdity of” acting” as a profession, and the proper middle seat etiquette on an airplane. Each of these monologues spill forth naturally from Jefferies, who comes off as being genuinely and genially curious about why people behave the way they do. Sometimes the riffs get a little redundant — like the old trick about innocently insulting a woman to get her more interested — but Jefferies seems thoroughly secure in his own skin and has a knack for getting to the heart of each matter. (Like the revelation that his comedy was inspired by a crazy mom.)

Qualls is very good as Billy, who probably has the strongest spine out of everyone in Legit despite the fact that he can barely move any of his limbs. Meanwhile, Bakkedahl nicely plays a very specific type of sad-sack. (Steve is a socially-awkward divorced guy, but we also see the side of him that is a caring brother to Billy.) Sterling does a lot of yelling as Janice, but even her clinginess is eventually given psychological heft in Ep. 8/ “Hoarders.” For a show with such a loose tone, this first season actually has a decent amount of continuity. The finale pushes Qualls’ Billy to the forefront and brings back almost every major recurring character.

Legit: The Complete First Season features all 13 season 1 episodes on two discs. There’s also an abundance of bonus material, including commentaries (by Jefferies, Bakkedahl and writer/producer/director Peter O’Fallon) on every episode, an auto-tuned montage of Rodney, and a “Director’s Cut” of the pilot that runs about 17 minutes longer than the original and features a cameo from actor/comedian Eddie Izzard. It’s in the commentaries where you’ll learn how much of these episodes is based on real life, including the scary home invasion depicted in Ep. 5/“Justice.”

The second season premiered on FXX this week. I’m guessing you could jump in and figure out what’s going on without too much effort. However, I do recommend you check out this funny first season if you get the chance. In terms of breaking the comedy mold, Legit is as unambitious as its protagonist. For better and worse, the show appears to be tailored to Jefferies’ sensibilities, which is basically to make you feel like you and he are just hanging out and it’s no big deal.

You Will Be My Son (Blu-ray) Scarecrow