Posted in: No Huddle by Brent Lorentson on March 2nd, 2014 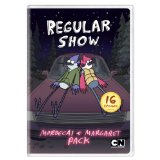 There is something charming and irresistible when it comes to the characters of Mordecai and Rigby.  The slacker duo that consists of an oversized blue-jay and a raccoon have a charm about them that seems to appeal to all ages, but for me I find them to be the most relatable of animated characters.  Perhaps not so much now but back in my teen years these two sadly remind me a lot of myself, the obsession with film, slacking off about work, and most notably the awkwardness around girls. With this DVD release we get a collection of episodes that explore the love lives of not just Mordecai but Rigby and even Muscle Man as well.

With 16 episodes together in the pack and coming in just under three hours of content, for fans of the show there are plenty of episodes to sit back and enjoy.  Muscle Woman would be the first in the collection that I’d consider really follows the “romantic” theme of the collection.  Rigby and Mordecai have to work together to help get Muscle Man out of the depressed funk he’s in since his girlfriend Muscle Woman has broken up with him.  This isn’t so much something they are doing out of the kindness of the hearts, but rather to get Muscle Man back to work.  Unfortunately the plan that seems to work is getting Muscle Woman to go out with Mordecai, only he needs to break her heart in order for her to see what she had with Muscle Man.  Sadly Mordecai gets nothing but the bad end of the stick in this episode, though it does have its sweet moments.  The Muscle Man and Muscle Woman relationship is followed up in the episode Fancy Restaurant where Muscle Man is asked by his girlfriend to meet her parents and to do it at some place that is fancy.  Once again it’s up to Rigby and Mordecai to help make this date go off without a hitch, but there is only so much that can be expected of a character like Muscle Man who enjoys ripping off his shirt and having a punch line that tends to end “…like my mom”.  When the date goes bad and Muscle Man and the gang have to take on the stuffy wait staff, well, that’s the kind of fun you come to expect from the show.

As for the rest of the episodes, Bad Kiss to the final episode Steak Me Amadeus seem to follow along the arc of Mordecai and Margaret’s coupling.  For those unfamiliar, Mordecai has been obsessed with Margaret who happens to work at the restaurant Rigby and Mordecai always frequent.  This might be the first animated couple I can think of where I found myself actually rooting for these two to finally get together.  With Bad Kiss, when Mordecai finally gets to kiss the woman of his dreams it turns out he has bad breath, so he and Rigby get a hold of a time machine and go back in time to try and make the memorable moment how it should be remembered.  This episode is silly, but I think just about everyone can relate to this fear at one time or another, being worried about ruining that moment that is supposed to be so perfect.

With Do or Diaper, Rigby and the gang is frustrated with the fact Mordecai hasn’t kissed Margaret yet, so Muscle Man throws down a dare that will result in Mordecai having to wear a diaper if he doesn’t kiss her by the following Friday.  This turns out to be one of those episodes that has a good message in relationships: don’t force something that should come naturally.  It’s these little life lessons I hope kids that are watching are taking some notes, because there are some early lessons to be learned here.

When it comes to my favorite episode of the bunch, though, Diary stands alone.  When Mordecai is asked to water Margaret’s plants while she is away and the boys stumble upon her diary, it’s one of those hilarious rides where the boys just can’t help \but make things worse for themselves by trying to repair the damaged diary.  When they enlist the help of a fellow groundskeeper Skips (voiced by Luke Skywalker himself Mark Hamill), things get silly when a magic quill is put to work to transcribe the book.

Overall the collection is a blast to watch and just validates for me that Regular Show is the best show coming out of Cartoon Network.  These packs are a great way to get started on watching the show or something to give to a friend who is a fan. For those with kids 11 and up, this is something that should keep them interested for hours and has a high rewatchability value.

Brent Lorentson is a horror writer and film critic based out of Tampa, Florida. With a BA in Digital Film, he co-wrote and co-directed Scavenger Hunt. His short stories have appeared in various horror anthologies. In 2019 his short script Fertile Blood will be a part of the anthology horror film Slumber Party. He is currently working on his first novel A Dark and Secret Place set to be released in late 2019. Favorite Films: Taxi Driver, Fight Club, I Saw the Devil, The Wild Bunch, Dawn of the Dead, A Clockwork Orange, Pulp Fiction, Heathers, The Monster Squad, and High Fidelity.
Non-Stop Samson and Delilah (Blu-Ray)