Posted in: Disc Reviews by William O'Donnell on March 3rd, 2014 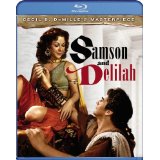 Biblical strongman Samson accomplishes many amazing feats and makes many a powerful enemy along the way. None are able to defeat this champion until his action catch the eye of Delilah, and he becomes the target of her affections. Unrenowned to Samson, Delilah has been tasked to discover the source of his supernatural strength. God granted Samson amazing physical strength, but his heart and mind are weak to the machinations of this sly, deceitful woman and it is only a matter of time before she learns his greatest secret.

Hedey Lamarr’s Delilah is a character that we love to hate. Her scheming is fused perfectly into her seductive charms. Meanwhile, Victor Mature is rugged as this Hebrew He-Man. Both play well off of each other although many a time they seem to be treading water with melodramatic dialogue that rallies back and forth and only seems to accomplish extending the run time of the film instead of advancing the plot efficiently.

One cannot discuss this film without remarking on the lavish costumes and sets, both of which won this film Oscars in 1949. The Philistines are depicted with heavy use of golden highlighted items, be it robes or armor. Sometimes the costumes are so elaborate they seem better suited for a modern day comic book adaptation.

While this film is not quite the most epic in scale or presentation as some other Cecil B Demille creations (mostly thinking of Ten Commandments here), it still has some stirring moments, such as when Samson wrestles the lion or the toppling of the Temple of Dagon.

The supporting cast seems a little amateurish but there are a couple of standouts that are worth noting. We get to see a very young Angela Lansbury as Delilah’s sister who was originally betrothed to Samson. I particularly enjoyed the dignified and subtly menacing performance of George Sanders, a man with a voice I’d gladly kill for (he was the original voice of Shere Kahn in Disney’s The Jungle Book if you need a quick point of reference) as the Saran of Gaza.

Samson And Delilah is presented in a full frame aspect ratio of 1.33:1. The 1080p image is arrived at with an AVC MPEG-4 codec. The transfer of this film is impressive as far as clarity goes. The colors look very vibrant and there is no aging of the film worth noting. It would have been nice to see an “epic” story in Widescreen.

The original mono tracks are presented in an English 2.0 Dolby TrueHD plus 2.0 Dolby Digital in French, Spanish and Portuguese. Although the boisterous score does not get to be featured in the surrounding speakers but the tracks that exist are mixed well enough that you still get a good sound presentation overall.

A decently entertaining Bible tale for those that want another title in their collection of sword ‘n sandals flicks. This Blu Ray features a very nice presentation,

the best one could ever hope for.