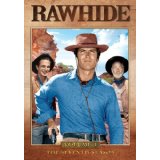 Long before Clint Eastwood was making our day as Dirty Harry or even roaming the badlands without a name for Sergio Leone, he was working the cattle drive on Rawhide. Rawhide was created to take advantage of the huge Western film and television wave that Hollywood had been riding for nearly a decade. With huge ratings for Gunsmoke and Bonanza among others, Rawhide was a bit of an unlikely success. Here the show explored the West on an endless cattle drive to get a few thousand steer to market. Along the way the crew would find themselves involved in someone else’s troubles or meet trouble head on themselves. The cattle drive theme would rely on the changing landscape to distinguish the show from other more sedentary westerns. More like Wagon Train, the constant movement always gave a sense of action even when there wasn’t much. Of course, there was a large number of changing support players along on the drive. Every operation needs cooks, ropers, and red shirts.

A very young Clint Eastwood played Rowdy Yates. Unlike any cowboy you ever saw, Rowdy had slicked up hair and looked more like a biker than a cowhand. He was the greenhorn in the bunch, usually finding each experience a learning opportunity. He had an almost naïve charm that made him popular. Eric Fleming was Gil, the trail boss. The third main character was Pete Nolan, played by Sheb Wooley. Sheb formed a good relationship with Eastwood that would be rewarded years later when Eastwood created a role for him in The Outlaw Josey Wales. I didn’t really watch the show even in its limited syndication run, so knew most of it by reputation only. Of course, I knew the Frankie Laine theme that has been used for everything from selling cars to western spoofs. The tune was also a moderate radio and record hit in the day.

The seventh season would be the last full season for Rawhide. The next one would be short and spell the end for the cattle trail on television. You can pick this up in two sets or as a combo. Paramount has split them up like before but released them together and as a pack. Both volumes have 15 episodes on four discs. The combo pack nets you all 30 episodes on eight discs.

There were some standout episodes in season 7 to be sure. The season begins with The Race. Rowdy quits the drive and gets his own herd. He finds himself in a race to get the heard to the railroad or risk losing it all. Who is he racing? It’s his old boss Gil. Gil gets his own chance to shine in Enormous Fist. He accidentally kills a man in a fight and finds himself guilt-ridden about the man’s widow and children. They’re the only ones who will stand by him when the mob wants Gil’s head. Lost Herd looks like it could spell the end of Gil and the boys when a bad decision to take the herd through a dangerous pass costs the lives of all but nine of the cattle. If he thought the pass was hard, now he has to face the Cattlemen’s Association. In The Book, Rowdy is forced into a gunfight arranged for profit and spectacle. It’s the Roman Coluseum all over again, and Rowdy might have to kill or be killed. A Time For Waiting finds Rowdy with a couple of moral dilemmas. He has to testify against a friend who then asks him to stay and see him hung. This is the first episode of the second set. Rowdy runs into his ex-commanding officer who refuses to stop fighting the Civil War. The plot includes $50,000 in stolen funds. When Gil holds the money, the bad guns poison the water supply and gun down the men. In Hostage For Hanging a Western version of Ma Barker holds Rowdy hostage and plans to hang him if her demands aren’t met.

This would be Eric Fleming’s final season on the series. While they tried to go on without him it was never meant to be. Rawhide would only produce 13 episodes the next year, and the long road was soon over. Of course, Clint Eastwood found plenty to do when the series ended. For Clint, it was superstardom that “be waitin’ at the end of my ride“.

Gino Sassani is a member of the Southeastern Film Critic's Association (SEFCA). He is a film and television critic based in Tampa, Florida. He's also the Senior Editor here at Upcomingdiscs. Gino started reviewing films in the early 1990's as a segment of his local television show Focus. He's an award-winning recording artist for Omega Records. Gino is currently working on his 8th album Merchants & Mercenaries. Gino took over Upcomingdiscs Dec 1, 2008. He works out of a home theater he calls The Reel World. Favorite films: The Godfather, The Godfather Part II, The Body Snatcher (Val Lewton film with Karloff and Lugosi, not the pod people film), Unforgiven, Gladiator, The Lion King, Jaws, Son Of Frankenstein, The Good, The Bad And The Ugly, and Monsters, Inc.
Teenage Mutant Ninja Turtles – Mutagen Mayhem Hours