Posted in: No Huddle by William O'Donnell on March 5th, 2014 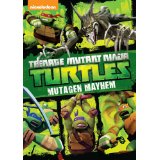 This is the third stab at making an animated series about these radical reptiles. This particular DVD set is the lfirst half of the show’s second season. We are privy to a wide array of toys…er, I mean, characters whose stories are firmly established at this point.

This season, the Turtles are under the assumption that their enemies the Krang and the Shredder are vanquished. Quickly their hopes are dashed and dozens of canisters of “mutagen” is spread throughout the city. This gives the Turtles an item-finding quest that will be very familiar to kids raised on video games like Pokemon that focuses on collecting an enormous number of items.

As an attempt to bring the Turtles to a new generation of child viewers, this is about as good as one can ask for. Although it really hasn’t been that long since the second series stopped airing, this show (which is presently in its second season of a 3 season renewal) makes for a nice segway into the upcoming feature film.
I suppose either Nickelodeon is nervous about release a large, complete season edition because a smaller edition costs less for fans, or they are taking advantage of both impulsive and completest fans who will pick up any edition that gets released, therefore a complete edition can arrive after some sales have already tested the market.