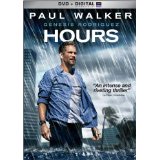 Paul Walker built his career on playing tarnished golden boys (Varsity Blues, The Skulls) before breaking out with the Fast & Furious franchise. He wasn’t as decorated as fellow recently-departed colleagues like Philip Seymour Hoffman, Peter O’Toole, James Gandolfini and Harold Ramis, but Walker was unequivocally a Hollywood success. Hours is one of the last films the actor completed before his November death in a single-car accident. The film quickly loses its way after a promising start, but Walker is easily the best thing in it. His work here is a bittersweet glimpse at the sort of roles he might’ve taken on as he progressed through his 40’s.

Hours has a potentially-gripping premise. Walker stars as Nolan Hayes, who arrives at a hospital with his pregnant wife Abigail (Genesis Rodriguez) during a stormy morning. Abigail has gone into labor five weeks early, and we watch a weary Nolan as he sits and waits to hear the fate of his wife and unborn child. Some of Walker’s very best work in this movie comes immediately after Nolan receives tragic news and goes into a state of shock/denial. Eventually, the storm outside knocks the power out in the hospital and forces Nolan to go to extraordinary lengths to keep a loved one alive. This is a good place to mention the film takes place in New Orleans. In 2005. Late August.

Writer/director Eric Heisserer set this movie during Hurricane Katrina and its aftermath. Some people will never be ok with co-opting a real-life tragedy for the sake of drama, but at least Hours doesn’t use the calamity to yell “Gotcha!” at its audience. The devastating scale of Katrina’s damage makes Nolan’s predicament more extreme, and it manufactures more drama than if the character were dealing with a regular storm or power outage.

Walker spends the majority of his time on screen by himself, especially after the power in the hospital goes out. Heisserer keeps us updated with time stamps that say things like “30 Hours without Power.” The actor is able to hold our attention during quiet moments, and he conveys a convincing sense of tiredness and mania when he speaks aloud to no one in particular. (His loved one is unconscious throughout.) Instead of  having Walker monologue quite so much, I actually wish Heisserer had used a few more flashbacks to flesh out Nolan and Abigail’s relationship. (Like the story about how Nolan proposed to Abigail.) Rodriguez is charming and affecting whenever she pops up.

The bigger problem is the storytelling hook devised by Heisserer: Nolan is anchored to one spot because he has to manually crank the generator keeping his loved one alive. It’s a strong idea from a psychological standpoint because staying awake until help arrives (if it arrives at all) takes a major toll on Nolan. The problem is that it’s also extremely limiting. Every time the story threatens to progress, Nolan has to sprint back to the same hospital room and crank the generator. It would’ve been an effective thriller device if it had been temporary, but it’s basically half the movie. This is how you stretch an exciting idea until it becomes tedious.

As I mentioned before, Hours is essentially a one-man show. Unfortunately, most of the other characters (besides Rodriguez’s Abigail) that drift in and out of the story don’t really work. Yohance Myles and Kelly Cahill do solid work as an overworked doctor and nurse, respectively, but they’re not in the film long enough to make a satisfying impact on Nolan or the audience. The other encounters — including run-ins with an oddly-chummy cafeteria worker, as well as some violent looters — inadvertently veer into surreal territory. I’d be ok with this swerve if I felt like Heisserer was doing it on purpose, but it seems to have more to do with the odd way these scenes are staged. If Heisserer — making his directorial debut after writing Final Destination 5 and the horror remakes of A Nightmare on Elm Street and The Thing — was actually going for surrealism or a heightened reality, he should’ve pushed the weirdness even further. As it stands, the most affecting supporting character is a wounded dog Nolan unofficially adopts.

Although it’s not an official special feature, the Hours DVD features a look at Reach Out Worldwide, the disaster relief organization Walker founded. (It plays after the movie trailers and before the main menu pops up.) Walker doubled as an executive producer on this project, which was filmed in New Orleans. It’s clear this film was close to the late actor’s heart, so it’s sort of gratifying that it’s one of the last things he completed. Hours also serves as proof that Walker may have evolved into something beyond Keanu Reeves 2.0. (Everyone knows The Fast and the Furious is basically Point Break.)

This well-meaning and emotional movie ends up being somewhat of a letdown. But if you’re a Walker fan, you’re going to want to check this one out to see him at his best.