Posted in: No Huddle by Brent Lorentson on March 5th, 2014 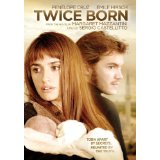 The key to making any good romance work is that you have to be able to root for the couple, that no matter what these characters may face, you have to be on board and believe this cinematic love affair is meant to be.  In the case of Twice Born, I have to say it does such a good job at getting me to root for this couple that I want to punch the film in the face for what it puts them through.  Yes, you read that correctly.  This film managed to get me so wrapped up in the characters that I found myself cursing at the screen simply because what Gemma (Penelope Cruz) and Diego (Emile Hirsch) endure is heart-wrenching to the extremes.  This isn’t simply a love story but a brutal example of what it is to endure tragedy for the love of a soulmate.

When we first meet Gemma, she is a caring mother of a teenager whom she wishes to take back home to Sarajevo so he can see where he was born.  This is an understandable experience she’d like to share with her son, Pietro (Pietro Castellitto).  The story then jumps into the past, when we see a younger Gemma setting off to travel, and it is in her travels she meets Diego, a charming American freelance photographer.  Though back home Gemma has a relationship, it doesn’t prevent her from her brief yet torrid romance with Diego which in turn brings about her first pregnancy, though the child never comes to full term.

Though Diego is constantly travelling and Gemma ends up leaving the man she was with, Diego finds his way back to Gemma, and the two pick up their courtship where they left off.  The two have a relationship that would even make most happy couples jealous, but yet there is still a flaw to their perfect romance.  It is soon discovered that Gemma is 97% sterile, and though the two wish for nothing more than to have a child together, it seems it is simply not meant to be.  But yet we know Gemma has a son, so we as viewers continue on with the notion that all hope is not lost for our lovers that things will somehow manage to find a way.

As for how the couple decides to have their child, it is through Aska (Saadet Aksoy) that Gemma and Diego turn to in hopes that Aska will be a carrier of their child.  Aska is young and has dreams of leaving Sarajevo to have her own band; since this is the early 90’s she’s also a loyal follower of Nirvana.  Gemma is threatened by Aska’s sensuality but understands that a child is possibly the one thing that will hold her relationship together with Diego.  To be fair, I don’t think any of these characters could have foreseen the consequences that would soon follow.

There is a scene during present day where Gemma takes Pietro to a gallery where Diego’s photos are on display.  Most of the prints are large and blown up, all with the exception of one Polaroid photo.  The details at the time of the scene are vague, and frankly had it not been for a scene later on in the film where we see the significance of the photo, the Polaroid would have been all but forgotten.  It’s this kind of storytelling as we weave through the past and present, as certain memories seem to almost overlap, where the strength of the film rests.  This simple Polaroid scene reminded me how life and our memories are snapshots of our past.  We’ve all heard the term “a picture is worth a thousand words”, but the film shows us this.  We see the pain and bloodshed all at the cost of a photo to show the world a glimpse of a life that those halfway around the world know nothing about.

As with the scene where we are to see Diego and Aska conceive their child, simultaneously the conflict going on in Sarajevo truly hits home as gunfire explodes through a window downstairs.  This isn’t meant to be subtle; yes, as the war is thrust into the face of our characters that tears a country apart; it too is the moment that forever scars our happy couple.  But the film continues to toy with us.  What really happened between Diego and Aska?  That is an answer that comes with such tragedy that it hit like a rabbit punch to the face.

My biggest complaint is, though the intensity of the war in Sarajevo is captured at the same time, the danger was never really there for our lovers.  Sure, we see some bloodshed, but with the exception of an all too brief scene with a sniper (which didn’t even involve our two lovers) and a scene where Gemma watches Diego trying to help people find shelter, the dangers of the war are simply not the constant threat as it should have been.  At times is as though the conflict was nothing more than afterthought to the story.

The editing seems a bit uneven at times as we slide from present day to the past, but it’s nothing too distracting.  It’s the execution of this complex story where thanks to the director and co-screenwriter Sergio Castellitto cleverly brings this novel written by Margaret Mazzantini, who also shares a screenwriting credit, to the screen.  As to the faithfulness to the book I cannot say, but the film has a complex tale that easily could have gone off the rails but instead delivers a powerful and touching film.

Though this is a really good film, as the film rolls into its second act to say I enjoyed the film is a different story.  This film is a downer.  Not that I feel that is a bad thing, but if you are going into this thinking you’re going to get a love story like The Notebook or Love Actually, get ready to be disappointed.  But I’m fine with this not being your traditional love story; not every love story is filled with happiness and joy.  Quite honestly I find the romance between Diego and Gemma to be one of my favorite onscreen love stories in years.  I feel with this review I’ve barely scratched the surface of the film, but I don’t believe that to be a bad thing.

Brent Lorentson is a horror writer and film critic based out of Tampa, Florida. With a BA in Digital Film, he co-wrote and co-directed Scavenger Hunt. His short stories have appeared in various horror anthologies. In 2019 his short script Fertile Blood will be a part of the anthology horror film Slumber Party. He is currently working on his first novel A Dark and Secret Place set to be released in late 2019. Favorite Films: Taxi Driver, Fight Club, I Saw the Devil, The Wild Bunch, Dawn of the Dead, A Clockwork Orange, Pulp Fiction, Heathers, The Monster Squad, and High Fidelity.
Wicked Blood (Blu-ray) Teenage Mutant Ninja Turtles – Mutagen Mayhem