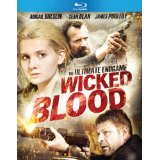 There’s a pretty good, southern gothic tale buried somewhere in Wicked Blood. Unfortunately, writer/director Mark Young isn’t quite able to extract it. Instead, we get a somewhat overqualified cast acting out Young’s down-and-dirty story of meth, chess and bikers that is exactly as messy, baffling and oddly intriguing as that description makes it sound. The film opens with a literal bang: we see the explosion of a shabby trailer. We don’t know who is inside, but we see a young girl stoically watching the flames from the outside.

Hannah (Abigail Breslin) is a teenage chess enthusiast and an orphan living with her older sister Amber (Alexa Vega) and her meth-addicted Uncle Donny (Lew Temple). The three of them live under the thumb of Uncle Frank (Sean Bean), a powerful local crime boss. (You can tell Uncle Frank is powerful because he barely gets out of his seat before the film’s final act; Bean projects menace by simply sitting behind a desk or a dining room table.) There’s also Uncle Frank’s unstable brother Bobby (Jake Busey), who seems to have an uncomfortable fondness for his niece, Amber.

Amber and Hannah are desperate to escape their current situation. Amber falls in love with Bill Owens (James Purefoy), a local biker and meth trafficker who works for her Uncle Frank. Meanwhile, Hannah starts working for Uncle Frank herself; she offers to deliver drugs to Frank’s various clients. Hannah wants to keep her family together, so she starts making a series of moves designed to make a better life for herself, Amber and Uncle Donny. Unfortunately, she winds up inciting a drug war and putting all of their lives in danger.

Young has a pretty strong point of view in presenting these hard-luck characters. He also displays a nice eye for visual detail — Wicked Blood was filmed in Louisiana — that goes beyond the loving close-ups of chess pieces and shabby couches on lawns. Unfortunately, I think he’d better served if a different set of eyes was responsible for the next script he directs. (Not likely, considering Young has written every movie he’s directed.)

A lot of time and energy is devoted to Hannah’s affinity and aptitude for chess, including several bits of vaguely poetic voiceover narration connecting several characters in the story to their corresponding chess pieces. (Uncle Frank, for example, is the King.) The problem is Young doesn’t succeed in paying this off. For instance, Hannah is supposed to be this brilliant chess player, so the audience reasonably expects some sort of reveal that illustrates what a master strategist she was all along. Instead, her plan to mess with the product she’s selling for Uncle Frank is reckless and very poorly conceived, so things get messy in a hurry and people are killed. I guess what I’m saying is Hannah should strongly consider switching to checkers.

A few questionable line readings notwithstanding, Breslin ably carries the film as Hannah. The film and this character are far removed from Little Miss Sunshine, but the actress has retained the spunk and tough-mindedness from her breakout role. Bean isn’t given much to do here. But, as I mentioned earlier, the Game of Thrones actor can radiate authority without even standing, which is good because there doesn’t appear to be much in the script for Uncle Frank beyond “he’s scary.” Speaking of scary, Jake Busey has clearly inherited the innate Busey-ness that makes his father thoroughly watchable as a professional whacko.

Rome’s Purefoy gives off a surprising and pleasing amount of decency for a character who is also involved in the illegal drug game. He has solid chemistry with Vega, who makes Amber such a striver that you believe she’d get into a relationship with a kind “bad guy” like Bill — despite the fact that he’s a crook and about twice her age — just to escape her current personal hell. I definitely have to mention Temple’s work as Uncle Donny. The actor may not be as well-known as his cast mates, but he gives a surprisingly detailed and affecting performance as a weak, hopeless addict.

His performance is just one of several glimmers you get at the stronger movie Wicked Blood could’ve been. (Maybe they should’ve started with a different title; “Wicked Blood” sounds like a fourth-rate vampire movie or something.) As it stands, this is flawed, watchable twist on the family drama.

Wicked Blood is presented in an aspect ratio of 1.85:1. The 1080p image is arrived at with an AVC MPEG-4 codec at an average of 24 mbps. The visual presentation alternates between some striking outdoor shots of the Louisiana bayou, and a more urban presentation that is as drab and colorless as these characters’ lives. So while the HD image won’t pop from the screen, it suits the material quite well. Young’s close-ups — which come pretty frequently — reveal an extraordinary amount of detail for the item being focused on, along with some nice blur for the out-of-focus stuff in the background. Medium shots go a bit soft at times, but look good otherwise. The only notable color is the too-red fake blood we see in bursts. There are no glaring flaws to point out, but the image also lacks a certain amount of texture that could’ve given the low-budget film a little more character. In short, the presentation is solid, if uninspiring.

The DTS-HD Master Audio 5.1 track fares slightly better thanks to a surprisingly varied and immersive sonic presentation. From the opening minutes, you can make out the sounds of cicadas and gently lapping water, which immediately put you in the film’s Louisiana setting. That level of immersion isn’t as apparent in the movie’s urban sequences, but it’s there if you listen closely. (Like the sound of traffic passing by a house whose living room is too close to the street.) The subs are heard from during the opening explosion, and a little bit later during a few scenes set Uncle Frank’s bar/headquarters. Fidelity is quite good, and dialogue comes through clearly. There’s also a (totally hokey) dream sequence where voices seem to be coming from everywhere in the surround sound field. Although the generic score takes over the rears a bit too often for my taste, this is a strong track that helps set the mood for the film.

Interviews with Abigail Breslin, Sean Bean, James Purefoy and Alexa Vega: (12:01) The actors talk about what drew them to their respective roles and say very complimentary things about working with one another. Purefoy says he was intrigued by the idea of playing someone who was the complete opposite of who he is in real life. Nothing earth-shattering is revealed here, so you can certainly skip this one. Presented in HD and features a Play All option.

There are a few things to like here, including a realistically-trashy atmosphere and some strong performances from the likes of Purefoy, Temple and (to a slightly lesser extent) Breslin, as she continues to transition into a grown-up actress.

Wicked Blood is ultimately sabotaged by its own sloppiness and shoddiness, but at least the crumminess in this movie is interesting.