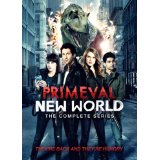 It started 300 million years ago… OK, it really started in August of 2008 when the British television series Primeval arrived on the scene. It was a combination Stargate and Jurassic Park. Professor Nick Carter (Henshall) became obsessed with a natural phenomenon he coined anomalies. These sparkling electro-magnetic disturbances were doorways to eras of the past, and later discovered, the future. His wife had disappeared into one several years earlier, and he ended up heading a government team called A.R.C. (Anomaly Research Center) to deal with the beasts that get through to our side. They needed to be returned in one piece. It turns out that killing even a prehistoric bug could generate time ripples that might change the present. Carter found out the hard way, and for five seasons Primeval dealt with the likes of errant dinosaurs and conspiracies from the future. The show ended in June of 2011… or did it?

Enter Primeval: New World. This one-season wonder picked up where the British series ended. This time it was set in Canada. The new Nick Carter was Alex Cross, played by Niall Matter. Cross is a rich industrialist. Like Carter, he had lost his wife years ago. His loss was much more permanent. A dinosaur ate her in front of him. A strange man in an ARC uniform just barely saved his life at the cost of his own. He keeps the body of his mysterious stranger in a cryogenic freeze. He dedicates his efforts and company resources to learning everything he can about the anomalies. He ends up using technology from the future to build the tech we already saw in the original series. Cross puts together a team to begin doing pretty much what Carter’s team did in the original. They would track down the anomalies and attempt to deal with the various prehistoric nasties that made their way through them to our time.

In England, he tracks down the man from the future who saved him. He’s Mac Rendell, played by Danny Rahim. Mac hasn’t yet joined the ARC and is a struggling lad about to join the Army. Cross “rescues” him and brings him to his company to run security. As the series begins, he adds him to the anomaly team. Mac’s a loyal muscle man until he happens to get a look at what Cross has in the deep freeze.

Angie Finch is played by Miranda Frigon. She is the most ambiguous of the crew. She’s been Cross’s friend for ages and is very much responsible for the success of the business. Unfortunately, she’s not happy with his anomaly activities. She wants the government to take over so Cross and get his focus back on the business. She ends up involving a secret Canadian military division called Magnet. It’s pretty much like America’s Project Blue Book. They were set up to investigate the odd stuff. Of course, by now it’s an underfunded, forgotten office manned only by Lt. Ken Leeds, played by Geoff Gustafson. He’s gung-ho to help out any way he can, but which way do his loyalties actually run?

The co-tech wizard on the team is Toby, played by Crystal Lowe. She doesn’t get to actually go out in the field much. She’s in charge of all of the gadgets and communications.

Cross’s partner in the field is Dylan Weir, played by Sara Canning. Dylan was an officer with Predator Control and was used to dealing with the likes of bears, large cats or the occasional wild dog. Now she’s helping Cross run down dinosaurs, giant bugs and prehistoric birds. She’s his most loyal companion and helps Cross with most of the field work.

Of course, the creatures were always intended to be the real stars of the series. The dinosaur effects aren’t the greatest, but they do beat out the stuff from the original series and most of those SyFy Original Movies. It’s funny that 20 years later Jurassic Park is still the standard for dinosaurs on the screen. These don’t live up to that standard, but this is television, after all, and when compared to the likes of Terra Nova or The Lost World these are likely the best creatures I’ve seen on a television budget. The original show was done by the same folks that did Walking With Dinosaurs. And while, those creatures weren’t bad when they were standing still, they did not interact as well in the modern environments. These do appear to get things like shadows and reflections better.

If all of this sounds like a spinoff of Stargate, you’re not too far off the mark. While based on the British series, this crew is pretty much the same folks that used to deliver the Stargate shows. While it was created by Star Trek writers Garfield Reeves-Davis and Judith Reeves-Davis it’s Stargate’s Martin Wood who is the show runner here. Directors include Stargate vets like Andy Mikita and Samantha Carter herself, Amanda Tapping. That’s not the only Stargate connection. Of course, the production is in Vancouver, where Stargate was also filmed, so there are a lot of common guest stars including  Lexa Doig, who plays a medical doctor in both shows, and Louis Ferreira, who was in SGU and here as a commanding military officer. It’s kind of nice to see Vancouver playing itself for a change. It’s been a variety of planets and cities for decades on shows like The X-Files and Stargate.

Fans of the original show can take heart. The series is pretty faithful to the source material. The anomalies look and act pretty much the same. The rules are also quite consistent. Fans will also be pleased that the first show’s Andrew Lee Potts appears both at the beginning and end of the season as Connor Temple. He’s the tying force between the two shows. In fact the season, and unfortunately, series finale features Potts in a two-part episode that loops back to the British series. I found it a very touching and satisfying idea.  Martin Wood certainly added his own touch to the show, but it’s clear that he had respect for what came before.

You get all 13 episodes on four discs. The image quality was fine. I’m not sure why we didn’t get the Blu-ray set to review. I’m sure it might have had a huge impact on my opinion of the creature f/x. There are 2-minute behind-the-scenes features for most episodes. There is also a feature on casting the show.

Unfortunately, the series is not expected to return. The ending does have some closure but is absolutely open-ended. There are rumors of television film or limited series return. So far none of this has reached the official stages, and you should go into this as if it ends here. If you don’t like hanging endings on shows that end up not returning, you won’t be happy here. If that saves you a few hours ending in disappointment, “glad I could help”.

Gino Sassani is a member of the Southeastern Film Critic's Association (SEFCA). He is a film and television critic based in Tampa, Florida. He's also the Senior Editor here at Upcomingdiscs. Gino started reviewing films in the early 1990's as a segment of his local television show Focus. He's an award-winning recording artist for Omega Records. Gino is currently working on his 8th album Merchants & Mercenaries. Gino took over Upcomingdiscs Dec 1, 2008. He works out of a home theater he calls The Reel World. Favorite films: The Godfather, The Godfather Part II, The Body Snatcher (Val Lewton film with Karloff and Lugosi, not the pod people film), Unforgiven, Gladiator, The Lion King, Jaws, Son Of Frankenstein, The Good, The Bad And The Ugly, and Monsters, Inc.
Congratulations To Brent Lorentson On 200 Reviews The Outsider (Blu-ray)