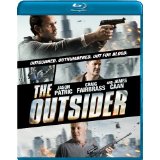 British badass Craig Fairbrass looks more like the henchman in an action movie than the hero. (To be fair, Fairbrass looks like the lead henchman who always gives the hero a little more trouble than you’d expect, but he looks like a henchman nonetheless.) The actor has worked steadily in England and Hollywood, including a role in Cliffhanger where he played one of John Lithgow’s (you guessed it) henchmen. With The Outsider, Fairbrass earns a story credit and the right to play the hero in this junky, bruising, low-budget cross between Taken and The Limey.

Fairbrass plays Lex Walker (strong name), an English mercenary who receives word that his estranged daughter Samantha has been found dead in Los Angeles. When he arrives to identify the body, he discovers the dead girl in the morgue is not Samantha. The good news is his daughter isn’t actually dead, but the bad news is she’s still missing. Lex goes on a brutish warpath through Los Angeles in search of Samantha. Along the way he enlists the help of her boyfriend Ricky (Johnny Messner) and Margo (Shannon Elizabeth), an opportunistic acquaintance of Samantha’s. Lex’s investigation puts him on a collision course with Schuuster (James Caan), Samantha’s shady former employer, and Det. Klein (Jason Patric), who is trying to solve the mystery behind Samantha’s non-murder.

What I just described in the previous paragraph is a pretty tasty recipe for a lean, mean action thriller meal. Unfortunately, writer/director Brian A. Miller — who shares a story credit with Fairbrass — can’t get out of his own way. Miller previously directed Officer Down, a low-budget cop drama with solid performances that was bogged down by an unnecessarily convoluted story structure. Although The Outsider opens with a sequence that shows us how that unidentified dead girl wound up in the morgue, the early part of the film features way too many scenes with lengthy, expository dialogue that falls flat. I appreciate Miller trying to build up Lex’s emotional connection with his lost daughter. But, simply put, neither the writing nor the acting is good enough to convincingly pull off any sort of meaningful engagement.

Instead, we get a bunch of scenes between Fairbrass and the rest of the cast that are only amusing because of how drawn-out and awkwardly-staged they are. We also get a plot that strains to keep our interest. (Turns out Schuuster made his millions through some sort of identity theft/phishing scam, and Samantha found out about it.) I don’t think anyone really cares that Samantha and Schuuster were at odds because of his inconsequential phishing scam, nor do we fully understand why it becomes important to blow the scam wide open; all we really need to know is that Lex’s daughter is missing, and Schuuster is responsible. I really feel like that’s enough for us to hop aboard this ride.

Once the babbling dies down, Miller does a nice job of staging the action sequences.  Fairbrass — who falls somewhere between Ray Stevenson and Vinnie Jones on the Brit tough guy spectrum — is totally credible as a butt-kicking mercenary, and surprisingly believable as a concerned, protective dad. Caan gleefully slums it up here; the actor seems to be somewhat liberated by the fact that the movie doesn’t even try to hide that Schuuster is the bad guy. On the other hand, Patric doesn’t get to have nearly as much fun — or do much of anything — as the dutiful detective who is constantly one step behind our hero, but he does bring a weary coolness to the role. And 15 years after her American Pie breakout, Elizabeth remains more convincing as eye candy than as a character who is only out for herself.

Fairbrass should be commended for netting himself a starring role in an American action flick. (Even one that’s pretty lousy.) But the only thing that winds up being surprising about The Outsider is seeing bigger names like Caan and Patric willingly take a backseat.

The Outsider is presented in an aspect ratio of 2.40:1. The 1080p image is arrived at with an AVC MPEG-4 codec at an average of 24 mbps. The film doesn’t take place in the more glamorous parts of Los Angeles, and the image does a solid job of conveying the shabbier parts of the city. (Filming actually took place in Baton Rouge, Louisiana.) While the visual presentation’s grunginess gives the material some believability, it doesn’t lead to an overly stimulating experience. Black levels are nice and deep during exterior shots of “Los Angeles”, but much more of the film takes place in curiously darkened interiors. In these scenes, medium shots look soft and lack refinement. Then again, close-ups — especially those of Fairbrass — reveal a good amount of detail. The image doesn’t have much in the way of blemishes or digital noise, but it doesn’t really pop either. The exception is the jarringly optimistic final sequence, which reveals a bright palette and well-defined picture. It serves as a nice contrast to the murky action that came before it, but it’s mostly a tease of what this Blu-ray was really capable of.

The DTS-HD Master Audio 5.1 track is about as subtle as you’d expect from a movie whose main character is named “Lex Walker.” That means this is an aggressive mix that explodes to life with the pop of gunfire whenever Lex or Schuuster fire off a round. Unfortunately, the track’s aggressiveness isn’t confined to the action sequences. The desperately urgent score by Patrick Savage and Holeg Spies underlines and puts an unnecessary exclamation point on every single scene. The score in this film works so hard that it actually becomes funny. (For example, did we really need “thriller music” for Lex calling Samantha’s job and getting the company’s voicemail?) The music works every part of the sound field, including the subs. Fortunately, other ambient noises break through to provide a strong sense of immersion during scenes set at a police station or during a party at Schuuster’s manor. There’s also a nice sense of directionality when the bullets start flying from one speaker to another.

There are no Special Features on this Blu-ray, which is surprising because you figure Craig Fairbrass would be eager to chat about his starring role.

The Outsider is an example of a filmmaker overestimating what audiences want from a straight-to-DVD action flick starring a British bruiser, a scenery-chewing James Caan, and a cult favorite like Jason Patric. There’s nothing wrong with writer/director Brian A. Miller wanting to elevate the junky thriller genre with dramatic heft, but his attempts come up well short of what a filmmaker like Steven Soderbergh achieved with the twisty Limey.

If you’re in the mood for a fun action flick about a burly European guy tearing through a bunch of anonymous baddies, you’re better off waiting until another one of Liam Neeson’s relatives gets taken.