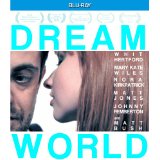 Whit (Whitby) Hertford is short, around 5 foot 1. He is the writer and star of Dreamworld. I mention this because he is the little dynamo that drives dreams of greatness. He also plays the depressed and scared little mouse because it is a part he understands. Whitby Hertford was a child actor (Nightmare on Elm Street 5: Dream Child), and he has retained the giant puppy-dog eyes even though now he has five o’clock shadow and a puffy face. He has worked regularly through the years, because clearly he is bitten with the bug. He wants to be a star. If he is going to be a star, he will be an unlikely one. At least he hasn’t  gone the way of many child actors. He’s not a drug addict, prostitute or convicted felon. He has the look of someone who is dying, though. He has a sad and longing look. The film is all about him, and it seems to be very heavily drawn from real life. The DVD of Dreamworld also includes three short films under the headings of Human Hearts (Long Story Short, Elliot, Tomorrow). They are all unique and interesting in their own right but all driven by an unquenchable longing. The DVD extras also include a Nickelodeon/Adult Swim pitch for an animated series called “Life After Myth”. It is a Sponge Bob Square Pants type show about grouchy and retired creatures like the Easter Bunny, The Loch Ness Monster and Bigfoot. That’s how Dreamworld begins with Whit (Oliver Hayes) pitching the series to a bored executive. The pitch goes terribly, and Oliver shuffles off not knowing what to do with his life. He whines and complains to his strange friends at an art exhibit. His gay best girlfriend, Jules (Nora Kirkpatrick) gives him an epic pep talk, but Oliver is not gay and is not consoled. Jules is probably six feet tall, so it’s funny having her stand next to short little Oliver. Jules is busy anyway making eyes at a girl at the party.

Oliver does meet a girl who is very interested in him. Her name is Lily Blush (Mary Kate Wiles), and she is so interested in him that she practically takes over his life. Lily enchants him and makes him fall in love with her instantly. She is a self-described pixie and is compared in the film to Kate Winslet in the The Eternal Sunshine of a Spotless Mind and Natalie Portman in Garden State. In other words, Lily is kind of a crazy muse and probably really believes it in her own mind. Lily convinces Oliver that she knows someone at Pixar and they should go on a journey together to pitch “Life as Myth”.

They get into a strange looking Volkswagen station wagon and have a crazy journey. Oliver is completely swept away and smitten. He has sex on the trip and also finds out she uses heroin. He puts this thought in the back of his mind. He talks about his past with her including the bully who tormented him in high school and his dead dad since they are near the town in which he grew up. Lily constructs a plan to meet the bully (Matt Jones). Jones (Breaking Bad) is one of the many actor friends Hertford gets to do bits in the movie. Another is Matt Bush ( Piranha 3DD, Nice Guy Johnny) who plays the friend who works at Pixar. It becomes obvious pretty quickly that Lily is a little crazy, and maybe a lot crazy. Her machinations are interesting but fraught with disaster. Oliver remains smitten, but things do go horribly wrong.

Dreamworld is a love story taken from real life which is funny but also full of sadness. I think the sadness takes over. A main plot point is about his dead crazy father who seems to be taken from Whit Hertford’s real life. At one point the real Hertford is shown as a child with his real dad.

The DVD taken as a whole is a slice of life of the striving and heartbreak that comes with trying to make it in Hollywood when you are not an easy sell. Oliver/Whit is an oddball, and so is Lily. Dreamworld is a love story about an elf/gremlin and pixie/siren. The ending is very bittersweet and sad but also hopeful. It is clear that Oliver/Whit will always be hopeful and striving but also always depressed and unfulfilled. The film is a low-budget scream for help by Whit Hertford. It is a naked and unvarnished look at his state of mind.