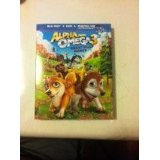 Baby here again. Yeah, I’m that German Shepherd/Chow mix who runs the security here at Upcomingdiscs. It’s my job to see that no one breaks in. I’ve got a perfect record. Of course, no one said anything about breaking out. But I don’t want to talk about that right now. Lately, it seems that every time I come into a room I’m having trouble getting noticed. Gino ends up running around saying the dog’s gone. It’s doggone this and doggone that. Hey, Gino, I’m right here, for cryin’ out loud. The problem is that Mom keeps telling everyone to hold their heads up high. Well, no wonder everyone thinks the dog’s gone. Hey guys,  I’m down here. That’s what happens when you’re under 3 feet tall. But I have a plan for getting noticed, and that spells T R O U B L E.

Come to think about it, getting noticed isn’t all it’s cracked up to be either. You see there was this Blu-ray case, and it happened to get a few holes in it that just so happen to be about the same size as a couple of my teeth. You Fed Ex/UPS guys know all about those. I’ll bet it was you guys who framed me. That’s OK. You know where I live. Wait a minute, that didn’t come out quite right.

Anyway… it’s been a while since we had any dog movies for me to review, so Gino gave me this Alpha & Omega 3 disc to look at. He neglected to tell me it was punishment for the whole Blu-ray case fiasco. That thing didn’t even taste very good anyway.  I don’t want to talk about that right now.

I also don’t want to talk about Alpha & Omega 3: The Great Wolf Games. But if I don’t, guess who’s sleeping in the laundry room for a while?  Heck, this one isn’t even about dogs. It’s about wolves, but it turns out dogs came from wolves. It turns out I’m the product of like a trillion years of something called evolution and selective breeding. I guess you Fed Ex/UPS guys will treat me with a little more respect for now on. And that spells T R E A T. So since it’s like family, here goes nothing.

And nothing is pretty much what you get with this movie. First of all, it’s not really even a movie. There should be a law against releasing a 45-minute cartoon and calling it a feature film. And it’s not like we’re talking high-quality box office production values here. Pixar this ain’t. Backgrounds lack any kind of detail and get worse as they fade into the distance. There are white gaps in the animation that look like those cut scenes in the video games Gino’s always playing. And I’m talking last-generation machines, not the new stuff. The wolves look more like they have feathers than fur. (I got that one from Mom.) Characters don’t really interact with the environments. It’s all pretty much made on the cheap. That would be fine for a Saturday morning cartoon but not a purported “feature film”.

What about the story? It seems there are these “games” that the regional wolf packs compete in every year. It’s for the pack juniors, and the Western pack hasn’t competed since Kate (Higgins) was the champion many years ago. It’s kind of a protest because the games used to be for everyone and now only cater to alphas. When Claudette (Torrance) meets Fleet (Jacobs), an entrant from the North, she’s determined to put a team together and compete. With only three wolves, they recruit a bear cub and porcupine to make a team. With no better choices around, Humphrey/Dad (Diskin) is the coach, while Fleet’s dad Nars (Lodge) is the coach of the North team. Nars is still holding a grudge over losing to Kate years ago and takes it out on Fleet to the point of abuse. The results are a bit predictable.

These wolf games are pretty much a couple of races and are so big there are only a handful of spectators. It also appears the rules can be made up between the coaches along the way. It’s all pretty much a stretch that owes almost nothing to the original real feature film. The voice cast retains none of those actors.

Poor animation, a sparse story and low production values keep this title from shining anywhere. It’s television quality at best, and we’re not talking prime time. The extras include only a maze game and trivia game that won’t engage the most bored of pups. There is potential here for these characters, but you won’t find it fulfilled by a production team whose motto appears to be: “We came. We pleaded. We failed.”

Baby was a German Shepherd/Chow mix canine reviewer at Upcomingdiscs from 2010 until 2016. She was also chief of security here with her Baby On Board Security side-business. And that spells F A N G S.
Delivery Man (Blu-ray) Californication – Season Six