Posted in: No Huddle by William O'Donnell on April 1st, 2014 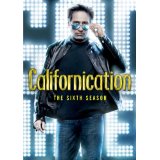 Six seasons (and several fictional years) in and Hank Moody (David Duchovny) is still drinking, snorting, womanizing and procrastinating from doing anything productive with his writing. Hank is still riding on the success of his first book and the subsequent money he received after it was adapted into a motion picture. Hank seems like the type of character who is incapable of any personal growth (aside from around his trousers…which is just the kind of joke he’d try to make) but with his daughter wanting to live abroad, which threatens his chances at reuniting with his on-and-off girlfriend, perhaps this season he’ll mature.
Right off the bat I should state that I am not a big fan of shows (and movies) that depict self-destructive people who are living incredibly privileged lives while contributing nothing to the creative word they claim to be a part of. I understand that Hollywood is inherently phony, therefore I should not take any of their actions seriously…but it can still be grating. To help emphasize the puffy, fake California life contained in this series, we have the introduction of a woman named Faith as a new love interest for Hank. Faith is a groupie but she calls herself a “muse,” which is a concept borrowed (stolen) from Cameron Crowe’s Almost Famous. What could be more frivolous than romanticizing the notion of existing without responsibility, in the forever childlike state of living the rock n roll life without actually making any actual music, just sleeping with the musicians (or now, a has-been writer)? This show has essentially shoehorned in the hooker with a heart of gold tale…but more pretentious.
Speaking of Rock and Roll, there have been frequent nods to rock and metal music peppered throughout this show’s history. In previous seasons this could arrive by way of celebrity cameos by the likes of Zakk Wylde and Tommy Lee , or with acoustic covers of 80s metal tunes (this season continues that tradition and I highly suggest you seek out Ryan Adam’s version of Iron Maiden’s “Wasted Years”), but this season has the most overt references to date. Championing this effort is Tim Minchin as Atticus Fetch, a lazily developed, two-dimensional rockstar stereotype who has hired Hank Moody to compose a rock opera based on his book (what did I say about riding off of that book?). The situation is preposterous but thankfully Tim Minchin is the best possible candidate to bring extra life to the thin writing (seriously, look him up on Youtube, it is a far better use of your time than this series and is the crux of my distraction from finishing this review).

I’ve spent a while in this review seeming to chastise these characters for being so “fake” and yet this show never set out to be realistic. There is a sequence towards the end of the season where Hank’s agent and his former wife are kidnapped, tortured and he is nearly castrated with a pair of hedge trimmers, and yet no police get involved…it is played off as a comic mishap that ends well after they repeatedly taze the unconscious body of their captor. After hearing such an example,you can imagine this show is not aiming for any grounded realism. But my gripe is not truly about “realism,” but with the general sense of uselessness I get from all of the characters (and the many rewards they receive for it). The promiscuity levels run on the same story logic as most pornographic films, in that, any and all situation s can and often will lead to consequence (and disease) free sex.
Saying your cool is a surefire way to expose that fact that you aren’t. And Californication is doing just that with its leading characters and his leather coat and cigarette dangling unlit from his lip. His five-o-clock shadow is as manicured as his girlfriends cuticles.  Though the performers are very talented people, this show is soulless.