Posted in: Disc Reviews by Jeremy Butler on March 31st, 2014 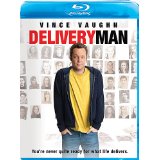 What would you do if you found out that you fathered 533 kids? Better yet, how would you handle that news on top of the news that the children you fathered are petitioning the courts to have your identity revealed? Well, that is the dilemma that Vince Vaughn is faced with in his new comedy Delivery Man. As you can figure out from the funny premise, this is a comedy, but it is not just hapless jokes without any real substance; Delivery Man actually has another side to it, a side that tugs on the heartstrings a bit.

A remake of the French-Canadian film “Starbuck,” (it is also worth mentioning that both films, original and remake, share the same creator, Ken Scott) Delivery Man tells the story of David Wozniak, a truck driver for his family’s butcher shop who has big plans for his life that never quite pan out. Perhaps that is too kind a way of putting it. A better way would be to say that David has been a bit of a disappointment to his girlfriend Emily (Cobie Smulders, How I Met Your Mother) who has just informed him that she’s pregnant, his father who would most likely fire him if he wasn’t related to him, and the family business. Not only that, he owes an immense amount of money to some unsavory characters with a penchant for drowning people who don’t pay their debts.

So taking all that into account, imagine the shock when he is informed that he is the father of 533 children due to anonymous sperm donations he made in his youth. And it gets much worse. Not only is he an uber-dad, but a majority of his kids are petitioning the courts to reveal his identity. Once the initial shock wears off, David enlists the help of his friend/attorney to protect his anonymity. However, his desire to remain unknown shifts after he receives a package containing a profile of all his children. Realizing that many of them are in need of help, David inserts himself into all of their lives. He sets out to do whatever he can to help make their lives a little better all while trying to keep them from learning his true identity.

I originally had no idea that it was actually an adaptation of another film. “There’s no such thing as an original idea,” although perhaps it doesn’t truly apply in this case given that the same man is responsible for both films. Doing my due diligence, I took it upon myself to look into the original, and it would appear that Delivery Man may very well be nothing more than an Americanized carbon copy of the original French-Canadian Starbuck. Somehow I can’t help but consider this to be double jeopardy, the possibility to collect twice on the same premise.

Despite this feeling of double jeopardy, I must confess that I was thoroughly engrossed by this film from the very beginning. The story does a great job of helping the audience get a sense of the character, a wayward son who has yet to take any responsibility over his own life, making messes and forcing everyone else to clean them up. Vince Vaughn does an excellent job portraying such a character, which to hear me say is really saying something given that I can count on one hand the number of Vince Vaughn films that I’ve actually enjoyed. In my opinion, the list of people that could have pulled off such character without alienating the audience can most likely be counted on one hand as well. Vaughn is at the top of that list; his brand of comedy made me laugh out loud, but he also managed to bring out some vulnerability of the character when it was needed.

Chris Pratt is another actor who must be mentioned as Vaughn’s friend/attorney. He was a source of great comedy, and the chemistry between Vaughn and himself was just what the film needed to elevate the story.

Delivery Man is presented in its original aspect ratio of 2.40:1. The 1080p image is arrived at with an AVC MPEG-4 codec at an average 35 mbps. The high-definition image presentation is quite natural. Everything from color to lighting accents realism. Nothing glossy or intrusive. The image is always sharp with plenty of detail on display. I wouldn’t say there’s a lot of texture to the image, but I’m not sure there’s much here that relies on such tactile elements. The focus is on the cast here. Black levels when called upon are a little above average. There’s not a ton of shadow definition, but again there is little call for that here.

The DTS-HD Master Audio 5.1 is really there to serve the dialog. There’s not a lot going on that allows for aggressive surrounds or very much sub force. The score is quite subtle, and you can hear everything said.

Building Family: (15:43) Cast and crew offer the usual sound bites. The focus here is on casting the film and the characters. There’s quite a few behind-the-scenes production shots and more than enough clips from the film.

Vince Vaughn – Off The Cuff: (4:23) A collection of Vaughn improv moments and cast and crew adulations.

As I mentioned earlier, this is a comedy; however, it is not the comedic portions that make this a worthwhile movie theater experience in my opinion, it is the human aspect. It is the idea of simply finding your purpose and being there for someone without expecting something in return, and that is what is displayed on center stage in this film. The best evidence of that were Vince Vaughn’s scenes with the actor who played his special-needs son; you need only watch that to recognize this film’s value.

Jeremy Butler is a film school graduate of the International Academy of Design and Technology. He is been writing for Upcomingdiscs since 2012; however, movies have played a big part of his life for much longer. Favorite genres include horror, science fiction/fantasy, and comedy. Favorite movies are V for Vendetta, Boondocks Saints, Kiss Kiss Bang Bang, and The Godfather.
Key & Peele: Seasons One & Two (Blu-ray) Alpha and Omega 3 the Great Wolf Games (Blu-ray)