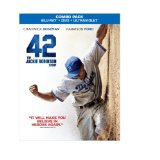 More than any sport, baseball is all about numbers. Unfortunately, some of those numbers — like 73 (home runs in a single season) and 500 (career homers) — mean a little less in light of the steroid era. Others, like 56 (Joe DiMaggio’s legendary hitting streak), seem destined to live on forever. The most significant number on that shortlist might be 42, worn by Jackie Robinson when he broke major league baseball’s color line on April 15, 1947. 42 — the film, not the number — is significant for a somewhat surprising reason. The movie succeeds as rousing, crowd-pleasing entertainment by functioning less as a straight-up biopic and more as the story of how Robinson became, arguably, the country’s first African-American crossover star.

The film follows Robinson through spring training and a 1946 season spent in the minor leagues with the Montreal Royals before he’s called up to the majors by the Dodgers at the start of the following year. Robinson’s strength of character — the thing that made Rickey choose him in the first place — helps him deal with the relentless racial attacks from fans, opposing players, and teammates. That same strength of character — on top of his gritty, sparkling play on the field — is what eventually wins (most of) those same teammates over and helps eradicate the sport’s color line for good.

The advertising for 42 has mostly eschewed the predictable “inspirational” tone in favor of making the movie seem, well, cool. Helgeland’s film follows suit as the director walks the fine line of making a period piece that doesn’t feel totally dated. The baseball scenes — particularly whenever Jackie gets on base — are lively and have style that isn’t distracting. The filmmaker was also smart to focus on a two-year period in Robinson’s career rather than trying to tell his entire life story. The court martial and Robinson’s issues with his absentee father are alluded to, but don’t slow the movie’s momentum. The narrower focus also allows Helgeland to explore underrepresented parts of the Robinson experience, including the families who took Jackie in when he was in town (because he wasn’t allowed to stay in hotels with the rest of the team). There’s also room for character moments — like a little boy blindly adopting his father’s prejudice the way kids automatically root for whatever teams their dads like — as well as totally warranted shots at the city of Pittsburgh.

The rest of the cast is filled with good actors making strong impressions in a limited amount of time. I thoroughly enjoyed Christopher Meloni’s (Oz, Law & Order: SVU) take on womanizing Dodgers manager Leo Durocher, who would start an elephant at first base if it helped him win the pennant. Max Gail (Barney Miller) plays Burt Shotton, who reluctantly comes out of retirement to guide the team, but then isn’t asked to do a single thing. Alan Tudyk (Firefly) is a truly nasty piece of work — and a hiss-worthy villain — as Philadelphia Phillies manager Ben Chapman, who singlehandedly put the film’s PG-13 rating in serious jeopardy with his racist taunts. John C. McGinley (Scrubs) also pops up as a radio announcer who favors vivid descriptions. The Dodger teammates that really stand out are the friendlier ones like Lucas Black as incumbent shortstop Pee Wee Reese and Hamish Linklater as Ralph Branca, who just wants Jackie to know it’s OK for them to shower together.

42 is presented in its original aspect ratio of 2.40:1. The 1080p image is arrived at with an AVC MPEG-4 codec at an average 25 mbps. The image quality here is a little bit of a disappointment. The image is almost always too soft. The baseball scenes still stand out and appear to be the best footage in the film. There is an annoying amount of shimmer, particularly on the period suits of many of the characters. Long shots appear to lack the kind of strong texture and detail this kind of a film was made for. The close-ups provide the sharpest images and do really show off the marvelous makeup and performance of Harrison Ford. Black levels are average. The image is a bit warm, allowing an orange and yellow presence to keep blacks from becoming inky and dark. I suspect much of this is the result of trying to reproduce a period look in the film. That becomes more apparent when you compare to the game footage that doesn’t have the heavy color correction and digital stylizing the rest of the film has. It’s all a stylistic choice, but it doesn’t play as well on Blu-ray as it might have in the theaters.

The DTS-HD Master Audio 5.1 is pretty much dialog driven with a nice place in the mix for the score.  There are some sweet surround moments that bring the game action alive. Everything is crystal clear with enough dynamic range to keep you right there in the action.

The Legacy Of 42: (9:17) Cast and crew join baseball personalities like Commissioner Selig to talk about the impact of Robinson’s success on baseball and society at large.

Stepping Into History: (9:14) This is a good behind-the-scenes feature with Harrison Ford putting in a lot of sound bite time giving us his take on the performance. Chadwick Boseman gets plenty of attention for his smart portrayal as well.

Full Contact Baseball: (10:05) Cast and crew talk about the physicality of the baseball shoot and you get to see some pre-viz and special effects work in making the historical stadiums.

Bullet To The Head (Blu-ray) Damages: The Complete Fifth and Final Season