Posted in: The Reel World by Brent Lorentson on April 25th, 2014 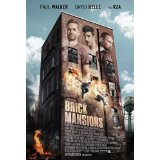 Being the last film completed by Paul Walker before his passing, fans are getting the chance to see their star up on the big screen before he takes his final bow in Fast & Furious 7. The only Paul Walker film that managed to get me excited was Running Scared. It was dark and gritty, and I feel director Wayne Kramer pulled a great performance out of Walker. Looking to Brick Mansions, a remake of the parkour French hit District B-13, it seemed like Walker could possibly have another teeth-cutting performance. But that’s not the case.

The Brick Mansions is an area of Detroit that was given its name after a spike in crime. It was decided this rundown area of Detroit should be walled in, keeping its violent criminals and drug dealers in and its law-abiding citizens out. Even in the land of the lawless there has to be a leader, and within the Brick Mansions that leader is Tremaine (RZA). He’s the perfect leader within these walls since he’s a drug dealer who has convinced himself he’s both a businessman and a leader.

Enter Lino (David Belle who plays the same role he did in District B-13), who wants to take down Tremaine’s drug empire and make him pay for the crimes against the people within the city. Lino is what gives this film life as we see him run and jump from rooftops through windows as a vigilante with his own code of justice. More bad news for Tremaine: he also has to deal with Damien (Paul Walker), an undercover cop who has a vendetta.

When a bomb is discovered in Tremaine’s hands, Damien is tasked with not only disarming the bomb but getting it into safe hands. Since, of course, the bomb is in the Brick Mansions, he has to enlist help from Lino, who happens to be in police custody.

When I saw that Luc Besson was the creator of this film, it gave me hope for the great action spectacle that could have been. After all, Besson is responsible for Leon, which I consider one of the top 5 great action films of the ’90s. But when it comes to his current work, I feel as though Besson has lost his edge. Then again, anytime his original work is Americanized — for instance Taxi (though I’m sure most of the world has forgotten that one) — his work seems to get lost in the translation.

But what isn’t muddled here is the not-so-clever political message thrown in about the people rising up against the government that is oppressing them. Here’s the problem with the message: you can’t have drug-dealing thugs who enjoy killing one another suddenly become sympathetic characters, all because politicians want to wipe out their homes.

The motivation behind most of these characters is silly, but that is not the worst of it. Even the action sequences have the charm of a Looney Tunes episode. A sequence that is glimpsed in the trailer involves Damien and Lino flipping together after flinging bricks into the windshields of cars chasing the other. If the logic in this scene is not enough to give you a groan, then perhaps the 2-on-1 match up between Damien and Lino against a henchman you could easily mistake for a giant will do the trick. Perhaps even more wildly outrageous are the shootouts. Hundreds of rounds fired, and no one gets hit. It would appear the henchmen in this film are the great grandchildren of stormtroopers.

In a world that is somewhat of a mix between Escape From New York and Robocop, we get nothing that resembles the bleak charm of either of those films. In a world that is run by anarchy, there is far too much order going on. Even with a bomb that can wipe out the city, we never feel the tension of impending doom. For two men to invade this city without weapons while facing a city where everyone else seems to be packing heat, neither Lino nor Damien have the swagger for me to believe they could be this two-man army. Instead, I feel this is the one film that could have benefited from having the Benny Hill theme playing throughout its action sequences.

It’s hard to take this film seriously, unfortunately. I believe the only reason Brick Mansions is seeing a theatrical release is because of the potential cash grab it can be. It’s frustrating also when you have a great action film like The Raid 2, which has similar action sequences, only they’re bigger, better and come with a stellar story. And yet Brick Mansions will outgross it with its box office take on Friday alone.

Brent Lorentson is a horror writer and film critic based out of Tampa, Florida. With a BA in Digital Film, he co-wrote and co-directed Scavenger Hunt. His short stories have appeared in various horror anthologies. In 2019 his short script Fertile Blood will be a part of the anthology horror film Slumber Party. He is currently working on his first novel A Dark and Secret Place set to be released in late 2019. Favorite Films: Taxi Driver, Fight Club, I Saw the Devil, The Wild Bunch, Dawn of the Dead, A Clockwork Orange, Pulp Fiction, Heathers, The Monster Squad, and High Fidelity.
Jim Gaffigan: Obsessed (Blu-ray) The Other Woman