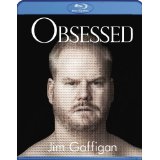 Jim Gaffigan has long been fixated on food. Need proof? The comedian’s 2013 memoir is called “Dad Is Fat”, and his most famous routine is about Hot Pockets. So it wasn’t exactly a shocker to find that Gaffigan spends most of Obsessed — his fourth Comedy Central stand-up special — talking about his dietary likes and dislikes. (Hint: kale is not on his list of favorites.) This is astoundingly straightforward and inoffensive material that nonetheless had me consistently laughing out loud.

“Hot dogs are like strippers; no one wants to know the back story.”

Need more proof that Gaffigan is Obsessed with food? This Blu-ray features chapter titles called “Fruits & Vegetables”, “Donuts”, “Southern Food”, “Fried Bread”, “Seafood”, “Chinese Desserts”, “Kobe Beef” and “Hot Dogs & Buffalo Wings.” The end credits feature a montage of the crew scarfing down donuts. Gaffigan obviously has a good sense of humor about his own doughy frame and his predilection for unhealthy food. (Curiously, he draws the line at ranch dressing, which he describes as a mix of “buttermilk and sadness.”)

When he’s not holding court on the inherent grossness non-fish seafood or the evils of apple picking, Gaffigan takes aim at the ridiculousness (and financial strain) weddings. (Whether you’re attending one or paying for it.) He also makes a convincing case for showers over baths and concedes that he may have fathered one kid too many. (Gaffigan and his wife Jeannie, who is credited as a co-writer for Obsessed, have five kids.)

Last year, the Wall Street Journal dubbed Gaffigan, “The King of Clean Comedy.” Obviously, some of the greatest stand-up comics of all time — George Carlin, Richard Pryor, Chris Rock, Louis CK — weren’t/aren’t afraid to work blue. (And I happen to enjoy an artfully-deployed curse word as much as more than the next guy.) Then again, Gaffigan has some terrific company on the list of great comedians who work clean, including legends like Bill Cosby and Jerry Seinfeld. Although he certainly has more in common with the latter group, Gaffigan has an oddball observational rhythm all his own.

The comedian sprinkles his wry, deadpan observations with breathy asides and a “valley girl” voice that help mask his gentle sarcasm and prevent him from coming off as vicious. (His takedown of Whole Foods hit dangerously close to home for me.) It also lends an air of unpredictability to his routines, which keep his audience off-balance in the best way. Sometimes the asides become meta, like when he wonders whether four devil/cancer jokes in a row is too much.

Gaffigan doesn’t belabor that particular point too much, just like he doesn’t seem too concerned over the fact that 70 to 75 percent of his 70-minute standup special is centered on his snacking preferences. Even though he’s self-deprecating about his appearance, the comedian is extremely assured on stage. He comes off as the funny buddy who makes you laugh, even if you don’t agree with everything he’s saying. (True confession: I like kale chips.) Obsessed doesn’t set out to revolutionize comedy, but — like the star of the show — it’s relatable, insightful and very funny.

Jim Gaffigan: Obsessed is presented in an aspect ratio of 1.78:1. The 1080p image is arrived at with an AVC MPEG-4 codec at an average of 20 mbps. The image is adequate; Gaffigan himself appears sharp and clear, but there is some noise evident in some of the black backdrop. (And even more visible noise during the infrequent, darkened audience reaction shots.) The only pop of color that stands out from the black/blue palette comes courtesy of Gaffigan’s red shoes. This is your standard, stand-up comedy show presentation.

The Dolby TrueHD 5.1 track consistently swells to life with the audience’s applause and cheers — particularly when Gaffigan first takes the stage — and provides a decent sense of immersion. Most importantly, the comic’s jokes come though clearly on this basic, yet nicely-balanced track.

Obsessed is set to premiere on Comedy Central April 27, and the special will be released on Blu-ray two days later. (No special features on this disc, unfortunately.)

According to Gaffigan’s website, the Comedy Central special clocks in at 42 minutes. As a result, I have to recommend you check out the Blu-ray because it has 28 additional minutes worth of material…and because it’s really funny.

About a Zombie Brick Mansions