Posted in: The Reel World by Archive Authors on April 28th, 2014 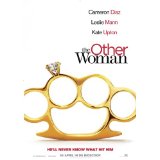 They don’t make good romantic comedies anymore. The Other Woman is not a romantic comedy. It is a comedy…about three women having a romance with the same man. But the three women find out about each other and bond together in a “Sismance”. That’s not a word, and it doesn’t sound as good as bromance, but there you have it. Part of the problem is they don’t make enough movies just for women, and that’s what this is. It’s a charming trifle along the lines of The First Wife’s Club. There is always a creepy guy at the center, so creepy guys beware. It’s a revenge comedy part of the time.

Cameron Diaz (Carly Whitten) is a high-powered lawyer who thinks she’s found good boyfriend material in Nikolaj Coster-Waldau (Mark King). He’s a rich business developer who blows off a date because he’s juggling too many women. Diaz’s father, played by Don Johnson, suggests she fix King’s pipes herself in Connecticut (since that was the boyfriend’s excuse). Diaz finds Leslie Mann (Kate King) as the unsuspecting wife. Diaz didn’t know and isn’t happy, but she’s over it. Leslie is not over it. She freaks out when she finds out her husband is cheating on her. She is floundering and out of control. Leslie doesn’t know what to do. Then Cameron and Leslie find out there is mistress number three, Kate Upton (Amber).

Leslie Mann is married to Judd Apatow in real life and has been doing comedic parts in his movies for years (as well as other people’s movies). Leslie steps up and does all the heavy lifting here as far as comedy. She does a lot of playing drunk and crazy. Cameron Diaz is the tough and smart career woman who tries to hold it together in this awkward situation. Kate Upton plays the pretty young thing. Kate is the big-deal supermodel with natural big boobs that everybody loves. She doesn’t have to do too much acting here, but she holds her own. The point of the movie is just to have some fun with women being themselves. The reaction of men is likely to be, “uh oh, chick flick, stay away”. That would be wrong. There is much to enjoy here for men. We get to see women acting all goofy and ridiculous, and we even get to see a role model for the perfect man, played by Tyler Kinney (Phil). Even Don Johnson is looking all suave, smooth and supportive in the movie. All the jerk moves are handled by Nikolaj Coster-Waldau (the king killer in Game of Thrones). Nikolaj is sweet when he wants something, but when he doesn’t get his way, he’s a pathetic monster. Sounds like all the men I know.

The film is directed by Nick Cassevettes, who is the son of famed actor/director John and actress Gena Rowlands. He has directed all manner of interesting films but is probably best known for a little movie called The Notebook, which he calls his worst film, and yet that is the one that has received the most love (and stars his mother Gena, by the way). He also directed My Sister’s Keeper with Cameron Diaz, which is probably the way he got this gig. He actually handles the comedy pretty well here, but since Judd Apatow’s wife has such a big showcase here, I’m sure team Appatow helped out.

Cameron Diaz is the star, and I’ve heard sniping about how she’s getting old, and that’s a load of baloney. She looks about as good as she ever did, and she gets a lot of comedy mileage out of competing with young, sexy Kate Upton. She’s a good sport about being the butt of aging jokes, since like I said she looks good. I think ageism toward women is part of the point here. Women who rely on men are likely to get screwed in the end. I think the film is really just trying to have fun and not be a big feminist statement. Not all men are super jerks, and the film points that out. Still, I think a lot of women out there have a lot of stories to tell about the dating wars and divorce nightmares. Hey, I’m with you, sisters. I’m a man, and I think a lot of men are jerks, too.