Posted in: Disc Reviews by Brent Lorentson on April 28th, 2014 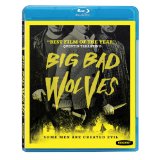 It’s movies like Big Bad Wolves that keep me excited about cinema.  After all, who would guess that Israel would produce this savagely dark fairy tale revenge film that is also one of the darkest comedies I’ve seen in some time with a visual aesthetic you’d expect from a Coen brothers film, but the violence and humor you’d expect from a film by Tarantino.  My first time viewing this film was via On Demand a few months ago; more and more I feel the cable companies are onto something by acquiring these little films and releasing them pay-per-view so that those not in New York and Los Angeles can experience these films before having to wait months longer for their DVD or Blu-ray release.  Now I get the chance to revisit a film that upon my first viewing was a punch to the gut; does it hold its own on its second viewing?  You bet it does.

The film starts up with a group of kids playing a game in the middle of the woods.  While the kids search the property for one of their friends, all they discover is one lone shoe.  Jumping ahead, we meet Micki (Lior Ashkenazi) with a group of fellow vigilantes dragging Dror (Rotem Keinan) into an abandoned building to beat a confession out of him.  Little does anyone know, someone is in the building with them and is filming the brutal interrogation.  Is Dror responsible for the missing girl?  At this point who knows, and anyone could be a suspect.  But when the video hits the internet, opinions are formed, and Dror becomes the focus of scrutiny by his students as well as their families.  After all, this is the time of social media, and we all know it spreads faster than the time it takes for an investigation to be completed.

When the body of the little girl is found with her head missing this is of course upsetting, and the filmmakers do not indulge in the gore with the understanding of how less is more.  The visual they choose to go with is haunting and speaks volumes about the monster who could be responsible for this.  Justice, of course, is expected, but there is nothing to connect anyone to the killing.

Gidi (Tzahi Grad) is the father of the deceased little girl; he’s a broken man who’s also lost his marriage in the process, and we all know you need to fear the guy with nothing left to lose.  Gidi is simply the easiest of these characters to root for, but as his plan for revenge begins to unfold, should this be the man we are rooting for?  It’s this play between justice and revenge that makes this more than a simple tale of revenge.

The latter half of the film takes place in the basement of a home Gidi has purchased to act out his revenge.  Though the violence is tense and unrelenting, this is also where a lot of the humor is sprinkled in.  This easily could have gone the direction of Saw or Hostel, but instead the filmmakers avoid the torture-porn route and use the violence to reveal the heart of these characters.  One of the more powerful scenes involves Dror simply offering the scenario to his captors: what if he were innocent?  This question lingered as the film plays out, and what I find brilliant about this, during viewings I let myself believe he was innocent and with a following viewing that he was guilty.  Just making this choice in my mind gave me two separate experiences.  Just for achieving that I have to commend the filmmakers.

Big Bad Wolves is presented in the 2.40:1 aspect ratio.  The 1080p image is arrived at with an AVC MPEG-4 codec at an average of 32 mbps.  This is a sharp and clean transfer.  The shots in the woods are simply warm and inviting, bringing us into this dark fairytale world.  As the film gets darker and descends into the basement the visuals get darker as well, but the clarity remains intact.  The black levels are deep and show plenty of separation during the night shots in the later part of the film.  This is a good-looking film and is presented without any noticeable artifacts.

The DTS-HD 5.0 Hebrew track is the automatic track that kicks in when the film begins, but you do have the option of subtitles or simply listening to the film with English dubbing.  The dialog is clear throughout, and the score conducted here is haunting and beautifully sets the tone.  But the real fun with the sound design comes as the story ventures into the basement.  All the wet and bone-crunching sounds are clear and have the desired effect to make the viewer cringe.  This is a track that helps make the film as hard-hitting as the visuals.

Big Bad Wolves the Making of: (16:17) Though it’s not the longest of making-of inserts, there are plenty of interviews and behind-the-scenes footage to make fans smile.  The segment is shown with subtitles but still worth a look.  It’s nice to see how these guys seem to care about keeping their effects real and keeping away from doing things digital.

AXS TV: A look at Big Bad Wolves: (2:57) A mix between a trailer and an interview discussing the film.

This film isn’t for everyone, but for those who have a soft spot for dark humor and revenge films, Big Bad Wolves is a treat.  This is one of the titles that blends genres and delivers a story that should be seen as a cautionary tale to parents everywhere.  In a film without any truly redeemable characters, any one of the characters can be viewed as the titled wolf to be afraid of, and that simply is part of what makes this film stick with you long after watching.

Brent Lorentson is a horror writer and film critic based out of Tampa, Florida. With a BA in Digital Film, he co-wrote and co-directed Scavenger Hunt. His short stories have appeared in various horror anthologies. In 2019 his short script Fertile Blood will be a part of the anthology horror film Slumber Party. He is currently working on his first novel A Dark and Secret Place set to be released in late 2019. Favorite Films: Taxi Driver, Fight Club, I Saw the Devil, The Wild Bunch, Dawn of the Dead, A Clockwork Orange, Pulp Fiction, Heathers, The Monster Squad, and High Fidelity.
The Other Woman Labor Day (Blu-ray)