Call Me Crazy: A Five Film 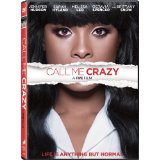 Call Me Crazy is about mental illness. It tells five different stories with women’s names as titles (well, one exception confirms the rule). Mental illness is an extremely important topic because an enormous part of the population is mentally ill. This collection deals with women mostly, but it should be noted that men are just as crazy but in different ways. This film is a followup to another film called Five about breast cancer. Both films have a heavy group of heavy hitters on both sides of the camera. They are produced by the Lifetime network, and both films are to be considered prestige projects for them. Mental illness is more of a sad secret in most families (although having a mastectomy still has some stigma, as well). It is something to be hidden and ashamed of. It shouldn’t be. That is part of the point to Call Me Crazy. It wants to show that we should all work together to help people with mental illness. These problems are as real as cancer. I have seen it many times firsthand.

Lucy (Brittany Snow) is a law student with a little problem. She hears voices all the time, and they hate her and torment her. That is called schizophrenia, which is carefully pointed out to be completely different from multiple personality disorder. She winds up at a fancy hospital with serene psychiatrist Dr. Nance (Oscar winner Octavia Spencer). It is directed by movie star Bryce Dallas Howard, daughter of movie star/famed director Ron Howard (she even throws a small part to her uncle, Clint). Lucy has come to see that Dr. Nance was right all along when she said that medications would allow her to live a more normal life. She has a brief encounter with Bruce (Jason Ritter, son of John) in group therapy. He is sweet to her but then has to leave when his insurance runs out. It is obvious her story is not over.

Grace (Modern Family’s Sarah Hyland) is a long-suffering and saintly daughter. Robin (Oscar winner Melissa Leo) is a mom and bipolar. It’s directed by movie star Laura Dern (daughter of Bruce and Diane Lane). I will give Ms. Leo a hand for going full tilt at this role and going for both extremes of the crazy spectrum. It is almost too, too much. Again, it boils down to taking your medications.

Eddie (Mitch Rouse) is a hilarious comedian who is severely depressed. His wife Julia (Lea Thompson, a big star in the 80’s) is completely supportive but still isn’t able to understand him.  There is a nice supporting cast of comedians helping out this segment including Chelsea Handler and Dave Foley. Like many of the segments, this one tips a little bit into cliche. It is directed by another movie star, Bonnie Hunt, who is good with comedy, but the focus here is on helplessness and confusion.

Allison (Sofia Vassilieva) is dealing with loving parents (married couple in real life Jean Smart and Richard Gililand of Designing Women) who have always given a lot of attention to another daughter. This episode is about finding the family dynamics where normal is the problem. This is the episode that best shows the complexity of the many problems facing millions of families all over the world.

Maggie (Jennifer Hudson) is a returning armed forces veteran who can’t go to the funeral of her commanding officer. It is directed by Ashley Judd (movie star and sister to Wynnona and daughter of Naomi). It also stars Ernie Hudson and Melanie Griffith. The mental illness in this case is Post-Traumatic Stress Disorder but with a twist. It is not from combat but repeated forced sexual assault.

Unfortunately, the overall effect seems trivial at times. It is impossible to get the sustained complex examination that would encompass the full emotions of these harrowing afflictions. (One character does reoccur in more than one episode showing layers of growth.)

It seems this film would be most useful as an appetizer for group discussions with patients and family members who have been through this in real life. If that was all that it achieved, it would be a great start.