Posted in: Disc Reviews by Brent Lorentson on May 7th, 2014 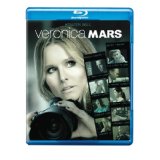 It was 2007 when Veronica Mars concluded its three-season run on the CW.  The door was left open for more seasons, and the season three set came with a bonus that showed us the direction things could have gone.  But after one of the most successful Kickstarter campaigns and seven years later, fans of the show will finally get to see their favorite little marshmallow, Veronica Mars, on one last investigation.  I’m going to come out and say it; I was a big fan of the show. The high school noir series was more than just your standard teen melodrama.  Veronica Mars seemed to always evoke the hard-boiled spirit of Raymond Chandler detective yarns, only it boasted a good-looking cast that spit witty dialog and pop culture references.

The film introduces us to a  more mature and refined Veronica (Kristen Bell) who has moved on from being the teenage private eye and is now applying to law firms.  She’s come a long way, (literally across country) and has tried to make a life for herself in New York with her boyfriend Piz (Chris Lowell).  Everything was going as planned until Veronica sees on the news that her old flame, Logan Echolls (Jason Dohring) is under investigation for murdering his girlfriend.  The heart strings are tugged for Veronica, and she hops a plane to travel back home to Neptune and help him out.

The timing is just right for Veronica’s return considering the Neptune High  10-year reunion is about to occur, which brings back all the show favorites for the possible final hoo-rah.  But with everyone back in town, this also makes everyone a suspect, and after ten years it’s not unheard of for people to change with time.  Of course the biggest change is with the former biker rebel. (For the sake of any fans who haven’t seen it yet, my lips are sealed.)

What works so well here, as it did with the show, is the chemistry between Bell and Dohring.  Sure, fans will squabble over who they feel Veronica should be with, but it’s impossible to not notice the onscreen rapport the two share as they exchange banter together.

As for the rest of the cast, it’s as though the cast never stopped being these characters, and for fans this is what we wanted, but what about those who are not fans?  This is where the film “suffers”; it doesn’t hurt the film, since the prologue at the start of the film catches everyone up on what all occurred in the series if not pleasantly reminding fans about Amanda Seyfried being in the show.  But in the end this film was made for the fans, and as great as that is, it’s hard to appreciate some of the film’s charm.

When it comes to the story and seeing Veronica investigating the crime, it felt too by-the-book and rushed.  In the series where we would have between 8-22 episodes to flesh out a story we now only have a hair over 100 minutes to tell a good mystery.  For the most part it gets accomplished, but the necessity of throwing in so many characters from the show to please fans at the same time hurts the film.  Granted, Ken Marino’s connection to getting a certain celebrity into the film was amusing, but other characters I could have done without.

By the time the credits rolled, though, I did have fun with this film, and I wanted to see so much more of these characters.  After all, if Arrested Development could manage another season after so long, I’d be excited to see the gang from Veronica Mars back for another season.

Veronica Mars is presented in an aspect ratio of 2.40:1.  The 1080p image is arrived at with an AVC MPEG-4 codec at an average of 25 mbps.  Shot in HD, this film looks really good.  The noir atmosphere of the show carries over into the film with its moody atmosphere.  The film has a saturated look to it, but in the daytime we get more natural-looking skin tones.  As for the night shots, these look polished and great for the aesthetic director Rob Thomas was going for.  This is much more polished than the look of the series.  There are no artifacts or compression issues that I noticed.

The DTS Master Audio 5.1 track unfortunately doesn’t shine as well as the video.  There are moments where the levels just seemed a bit off, most notably during a car ride between Veronica and her father.  Though the surround is utilized, it doesn’t really allow for much immersion into the film; the ambient sound simply went unnoticed.  Through the scenes at the reunion, with all the background chatter, it worked well enough, but it’s hard to mention anything too notable here.

By the Fans: The Making of the Veronica Mars Movie (55:43)  A really nice feature that delves into every aspect of how this film even came to be.  Getting to see Thomas and Bell getting excited about the Kickstarter launch down to the Comic Con panel, this is a solid feature.  After watching, my respect for those involved and loyalty to the fans just had me appreciating them so much more.

More on the Set Fun (approx. 19 minutes) A collection of mini-featurettes that give glimpses into the production of the film  These are all fairly standard, but “Game Show with Kristen Bell and Chris Lowell” and “It’s not all about you, Monkey” were the segments that stood out most.

Deleted Scenes (4:20) Nothing too notable here. The first scene gets into how Veronica’s dad is possibly struggling with his agency by accepting dinners as payment, but it’s easy to see why this hit the cutting room floor.  The other scenes really don’t do much for the story either.

Gag Reel (4:35) We get to see the cast and crew ham it up together as they have fun around the set while giggling through scenes or blowing lines.

Overall knowing that this is a film made for the fans and would not even exist if not for the fans, it’s hard to judge it for being so inclusive with itself.  I’m sure non-fans can still sit down and enjoy the film, but I don’t expect this to have the carry-over audience the producers had expected.  But hopefully the film can introduce people to a show I have no qualms with calling one of the best shows on television in the past decade.

Brent Lorentson is a horror writer and film critic based out of Tampa, Florida. With a BA in Digital Film, he co-wrote and co-directed Scavenger Hunt. His short stories have appeared in various horror anthologies. In 2019 his short script Fertile Blood will be a part of the anthology horror film Slumber Party. He is currently working on his first novel A Dark and Secret Place set to be released in late 2019. Favorite Films: Taxi Driver, Fight Club, I Saw the Devil, The Wild Bunch, Dawn of the Dead, A Clockwork Orange, Pulp Fiction, Heathers, The Monster Squad, and High Fidelity.
Call Me Crazy: A Five Film Gamera: Ultimate Collection V1 & 2 (Blu-ray)