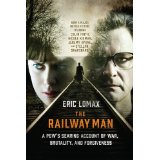 Even the people who manage to escape war with all their limbs intact feel its impact for the rest of their lives. Of course, it’s much trickier to spot the emotional and psychological wounds veterans like Eric Lomax carry with them. The Railway Man is based on Lomax’s harrowing World War II experiences and the day of reckoning, decades later, with one of his tormentors. In turning Lomax’s real-life story into a dramatic movie, the film doesn’t so much ask if revenge is good for the soul; it argues that it might be necessary.

“You should be ashamed to be alive.”

In 1980, Lomax (Colin Firth) is as a member of a Veterans Club, which also includes his concerned best friend and fellow survivor Finlay (Stellan Skarsgard). Lomax may have survived WWII, but The Railway Man makes the point that he hasn’t done much living. The only thing Lomax seems to be passionate about is rail transport, so it’s no surprise he meets the love of his life on a train ride.

“His whole life has been trains.”

Lomax and Patti (Nicole Kidman) quickly fall in love and get married. (This barely seems like a problem because the sparks between Firth and Kidman are so strong.) Although if their courtship had taken a little longer, Patti might’ve noticed her husband was prone to scary, debilitating episodes brought on by his traumatic past. After dropping several hints and flashes of Lomax’s experience, The Railway Man eventually (and repeatedly) takes us back to 1942 Singapore, where a younger Lomax (Jeremy Irvine) was a British officer. He was also among those taken captive and forced to work on the treacherous Thai-Burma Railway.

“Building a railway is a hard, miserable job.”

The real hardship for Lomax, however, came after his Japanese captors discovered a radio receiver he and some friends had built to stay up-to-date on the war. They become convinced Lomax was trying to communicate with the outside world and begin a special round of torture. Back in Lomax’s present, his marriage to Patti has similarly deteriorated into a hard, miserable job. When Finlay discovers that Lomax’s lead Japanese torturer is still alive, he tells Patti first. She must decide whether to share the information with her husband. On one hand, it could lead to some much-needed closure for Lomax. On the other hand, telling her husband could shatter both their lives if Lomax opts for violent retribution.

Except, not exactly. Granted, I’ve seen more than enough movies to be wary of any “based on a true story” tag. So I wasn’t exactly shocked to learn the script by Frank Cottrell Boyce and Andy Paterson played it fast and loose with some key facts, including the circumstances surrounding Lomax’s reunion with former tormentor Nagase (Hiroyuki Sanada). Then again, anyone who is interested in a fuller, more accurate account of Lomax’s experiences can simply read the autobiography this movie is based on. The goal of this (and any) movie is to be entertaining and thought-provoking on its own merit.

On that front, The Railway Man is buoyed by strong performances that help cover up some storytelling issues. The film is directed by Jonathan Teplitzky with a deliberate pace and a chilly palette that make the outbursts of violence more affecting. The downside is the carefully-measured storytelling isn’t really spent on revealing or exploring interesting details about the characters or their lives. For example, we know very little about Patti other than the fact that she’s a nurse by trade; the character is alluring mostly because she’s played by Nicole Kidman. We actually don’t even get to know Lomax very well, beyond his deep knowledge of trains. For better and worse, Lomax could be any traumatized boy during any war. That gives the story some universal appeal, but it makes it hard to fully connect with the decision he ultimately makes. The result is a movie that simultaneously feels slow and rushed.

Firth, appearing more rumpled than we’re used to seeing him, is terrific as Lomax. He’s gotten extremely good at portraying barely-contained psychological turmoil (The King’s Speech, A Single Man), but this is one of the few times we see the actor explode violently. He’s matched by an equally-good Kidman, who wears a mousy wig/hairstyle that can’t fully dampen her movie-star radiance. The actress’s eyes do the heavy lifting in terms of conveying Patti’s fierce commitment to Lomax. (Not to mention the former nurse’s innate desire to want to heal him.) Unfortunately, Kidman gets to a point where there’s not much for her to do beyond putting on a Concerned Wife face. So Patti is largely sidelined for the film’s latter half, as is Skarsgard’s gently charismatic turn as Finlay. (I’ll just say this is totally different from the last time Skarsgard and Firth hung out together in a movie.)

The final portion of the film is dedicated to the powerful reunion between Lomax and Nagase. Firth and Sanada are so good together, I wish Teplitzky had let us see more of Lomax and Nagase wrestling with their combined guilt and shame. Instead of bringing the Lomax/Nagase confrontation earlier (and sticking with it), the film keeps flashing back to their horrible ordeal. (Irvine heroically carries these segments quite well by showing us the physical and mental toll.) The filmmaker probably wanted to jolt the audience in the same way Lomax was inconveniently jarred by his memories, but it winds up unnecessarily disrupting the flow of what should be an emotionally-potent reunion.

We’ve obviously had countless stories set during WWII and its immediate aftermath. (Heck, The Railway Man isn’t even the first movie about a group of British POWs forced to take on an arduous construction project by their Japanese captors.) We’ve also gotten retribution-fueled tales set decades after the conflict. While Nazi-hunting stories immediately take on a greater symbolic importance, Lomax’s story provides a more personal alternative that is much rarer. It’s a fascinating story that deserves to be told; I just wish The Railway Man had told it better.

Still Mine (Blu-ray) Call Me Crazy: A Five Film