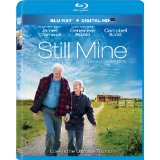 Craig Morrison was in his late 80’s the first time he got in trouble with the law. Still Mine tells the real-life story of the Canadian octogenarian who found himself in court facing the prospect of jail time. In case you’re wondering, Morrison didn’t rob a bank or cheat on his taxes. He merely wanted to build a modest house on his own property that could better accommodate his ailing wife. And he insisted on doing it himself.

The film opens with a tired-looking Craig (James Cromwell) preparing himself to make a statement in court. The action flashes back two years, and we see Craig on the expansive 2,000-acre New Brunswick property he shares with his wife Irene (Genevieve Bujold). We eventually learn the couple has been married for 61 years, but the playful, tender rapport between Cromwell and Bujold conveys that connection within minutes. Just as surely as we get glimpses into their loving relationship, we also get hints at some of the problems beneath the surface. Craig’s cattle and strawberry businesses begin to falter, while Irene absentmindedly leaves an oven mitt laying across a hot stove and forgets that some misplaced actually belongs to her.

Craig decides to build a smaller house that better suits Irene’s needs. Unfortunately, he immediately draws the attention of Daigle (Jonathan Potts), an inspector who throws numerous bureaucratic roadblocks in front of Craig. As Irene’s health continues to deteriorate, will Craig be allowed (or able) to finish his new dream house before it’s too late?

To be honest, it’s almost impossible not to sympathize with Craig’s predicament. On one level or another, most of us have been the victims of governmental red tape at the expense of common sense and/or efficiency. So by the time one character asks aloud, “when did we become a country of bureaucrats?” there’s a good chance you were already thinking to yourself, “just let the guy build his own house already!”

That being said, I wouldn’t have minded a slightly more even-handed approach. I realize absolutely no one is in a hurry to sympathize with pesky, killjoy building inspectors, but it would’ve been nice to get some inkling as to why one would take such a harsh stance against someone with intentions as benevolent as Craig’s.

Still Mine is written and directed by Canadian filmmaker Michael McGowan, and he seems to realize this one-sided conflict isn’t strong enough to carry the story. The movie is at its best when it’s depicting Craig and Irene’s marriage. What’s even more interesting is that the film explores every phase of that marriage without using flashbacks or other tried-and-true cinematic tricks. Their shared memories — which Irene is struggling to hang on to —represent the past, while their present-day struggles reflect their efforts to set up a future, i.e. the final part of their lives. Irene may be slipping away, but she is lucid enough to staunchly oppose going into a retirement home, which she likens to a “slow shuffle into the ground.”

I’ve touched on it before, but it’s worth repeating: Cromwell and Bujold are terrific together (and separately). Cromwell, in particular, seizes hold of the lead role and unleashes a determined, quietly powerful performance. Craig is definitely building the house to accommodate Irene, but there’s also a big part of the project that gives him a much-needed sense of purpose. Cromwell is brusquely charming throughout; his Craig is understandably cranky without completely veering into “get off my lawn” territory. (There’s even a random bit of Cromwell nudity, ladies.) We see Craig’s undying love and frustration when dealing with Irene, who is equally stubborn in her convictions. Bujold makes Irene’s transition from vulnerable to frail very affecting. Instead of merely relying on increasingly vacant facial expressions, Bujold also plays the character’s anger, fear, and denial. Did I mention that she remains thoroughly lovely throughout?

The other notable name in the cast is Campbell Scott (most recently seen in The Amazing Spider Man 2), but he only appears for a few scenes as Craig’s sympathetic lawyer. Potts has the thankless job of playing the heartless inspector, and he struggles to prevent Daigle from coming off as an outright villain. (The script doesn’t do him any favors.) Julie Stewart and Rick Roberts appear as Ruth and John, two of Craig and Irene’s seven grown children. Ruth and John express their skepticism and begrudging support, respectively, over Craig’s project. The film bumps up against some interesting ideas regarding how much authority adult children have over the care of their elderly mother — compared to an elderly father/husband who wants to act autonomously — but doesn’t really explore them. Their scenes feel authentic but come off as a bit repetitive.

In the end, the film is a pleasing mix of Away From Her (the terrific Canadian drama directed by Sarah Polley about an elderly couple that includes a wife grappling with Alzheimer’s) and Life as a House (another movie with a protagonist racing against a serious health issue to finish building a home). Of course, Still Mine has the added benefit of being based on the Morrisons’ quietly remarkable true story. Even if that weren’t the case, Cromwell and Bujold’s performances — along with McGowan’s sensitive handling of the main characters — tap into the truth and beauty of a life-long connection.

Still Mine is presented in an aspect ratio of 1.85:1. The 1080p image is arrived at with an AVC MPEG-4 codec at an average of 25 mbps. There’s a lot of appealing, natural light in this sun-kissed image. Speaking of natural, there’s a terrific amount of detail in close-ups that help make Cromwell seem older than he actually is. There’s not a lot of use for black levels, but the few instances — a handful of bedtime scenes with Craig and Irene — feature nice shadow detail. The movie may not paint a pretty picture of what it’s like when Alzheimer’s invades a household, but this Blu-ray from Fox makes the Morrison’s rural lives in St. Martins, New Brunswick look downright idyllic.

The DTS-HD Master Audio 5.1 track is appropriately unassuming, even as it gives us a good sense of the Morrisons’ surroundings. The couple’s house is in the middle of a 2,000-acre plot of land, and the track does a nice job of mixing in the inherent quiet of such an isolated location with subtle atmospheric noises. The mournful score — credited to Hugh Marsh, Don Rooke, and Michelle Willis — is used to spare, strategic effect, and dialogue comes through clearly. Fidelity is spot-on in this effective, relatively unambitious track.

The real Craig Morrison died last year, so I guess I can understand why this disc doesn’t have any special features. Still, part of me really wishes the Blu-ray had at least a little supplementary material that deepened our appreciation of this story. (Maybe a tribute to Morrison.)

I realize that a movie about a pair of octogenarians fighting bureaucratic red tape isn’t anyone’s first choice for a movie night, but Still Mine is worth checking out for Cromwell’s powerhouse performance alone.