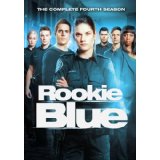 It’s hard to review a series starting from the fourth season, which is exactly what I had to do when Rookie Blue arrived for review recently. In the early days of television, it wouldn’t have been a problem. Most shows, cop shows in particular, had a full story with each episode and a continuity that didn’t require you to see any episodes in any particular order. This was a must if a show were to find an afterlife in syndication where show orders were largely disregarded. Starting a show in year four merely required understanding the set up, getting to know the quirks of the characters and watching it all play out. Since Hill Street Blues changed the landscape of the cop drama, we’ve learned to follow story threads over multiple episodes and even seasons. Since then that concept has been jacked up to the nth degree, and there are shows you wouldn’t even think about joining in the fourth season. Fortunately, Rookie Blue isn’t quite there.

Even the most complex of shows often provide what are called “buy-in” points. These usually occur at the beginning of episodes or mid-season breaks. They allow new viewers a convenient place to join with minimal confusion. Shows must grow or die. Somehow even the most mythology-based shows have to grow their audience. With Rookie Blue, there are only 13 episodes per season, so there isn’t a lot of time to provide that entrance ramp. If you already know the show, you’ve already seen these episodes and likely have decided if you’re going to pick them up. The rest of you might be curious. What you want to know is can you “buy-in” at season four, at least enough to keep from feeling left out. The answer is yes and no.

The premise itself is relatively simple and requires no real past knowledge to get on board. Unit 15 is the elite unit of an unnamed Canadian metropolitan police force. The unit is led by Staff Sergeant Frank Best (Bent). Each episode begins with his roll call. Apparently in Canada it’s called parade. He does the usual job of giving out riding partners, assignments and providing the general “hot” information for the shift turn-out. The show focuses on a group of rookie cops assigned here. This is where it gets tricky. They are still pretty much referred to as rookies, but it’s the fourth season, and it’s clear they’ve been there more than a year by now. The episodes follow their day tour. At anywhere from 6-12 minutes the cop day ends and we get to see who is hooking up with who. The cover uses the term “Grey’s Anatomy with guns”, and that’s pretty much what it is.

The central rookie character appears to be Andy McNally (Peregrym). It appears she was once romantically tied to Sam Swarek (Bass) who has this season been promoted from patrol cop to detective. Andy has spent the last six months, the time since last season, on special undercover assignment with fellow patrol officer Nick Collins (Mooney). Nick was going with Officer Gail Peck (Sullivan). It seems the six months undercover as boyfriend/girlfriend has brought them together, something they take several episodes to finally figure out. For Andy, it’s easier. Sam’s taken up with newcomer Marlo Cruz (Ancheril) while Andy was undercover. Meanwhile Gail’s jealousy over an affair that hadn’t happened yet drives Nick away while she thinks about changing teams in the sexual preference department. Frank ends up getting married. His goddaughter Chloe Price (Fia) joins the unit and pretty much stalks Dov Epstein (Smith) until she finally breaks him down. There’s also Officer Oliver Shaw (Gordon). He’s the vet who trained these rookies and also has a new girl named Celery, who is a practicing wiccan. Officer Chris Diaz (Milne) recently found out he had a son and leaves the department to be with his new family. Don’t worry, Diaz fans, that’s not going to work out too great, and he’s not leaving the show. Finally, there’s Detective Traci Nash (Okuma) who was partnered with the now departed Jerry Barber who has left the show. She now partners with Sam, but his romantic issues tend to leave her fending for herself. Fortunately, she’s pretty good at the job and manages just fine.

If you can follow all of that, you’re pretty much ready to jump in. It’s possible, and I managed to figure it out enough pretty early to follow the show. Still, why do that if you don’t have to? The earlier seasons are all out on DVD, and you might as well start from the beginning.

It’s an awkward show, to say the least. The police aspects of the show are actually above average. There’s obviously some good creative writing on this team, and each of the police stories was pretty interesting. The show manages to look fresh and the criminal stuff not quite so hashed out. If Rookie Blue wanted to be a straight police drama, it could be a very good one. Only I suspect it’s not what they really want to be. The only trouble with these good cop stories is they tend to get abbreviated so that we can get to the musical chairs of the romantic entanglements. That’s the audience Rookie Blue is really gunning for, and that’s where they lose me to a certain degree. Let’s just say there’s more kissing than cuffing going on here.

The motto of the creative staff this season was change or die. Change they did. I already talked about Noam Jenkins leaving the show, and it was a calculated risk. He was a popular character among the fans, and there was a rather vicious internet campaign waged against the writers for killing him last season. The creative forces here were right. Characters have to die in police drama or the danger will never be compelling or real. Two new characters were added in Cruz and Price. Of the two Price is the more interesting. She talks a mile a minute and can be quite annoying, but there’s a puppy-dog look about her that can be quite endearing. Of course, the real changes were in their love lives. Every character on the show either has a new relationship or a breakup of an old one. In most cases it’s both. I know some of you like that sort of thing, but I found it exhausting.

The production looks better than most of the Canadian shows I’ve seen over the years. The sets are pretty good, but the location scouts are the real heroes for this show. We get fresh-looking locations that add to the drama and realism of the series. These are places we haven’t seen to death on television. There’s also some rather unique architecture. It’s rather nice to see a Canadian city playing Canada instead of trying to double for an American location.

The actors are all pretty much on their game. I really don’t like some of these characters, but that’s not really bad acting, but irritating characters played maybe too well. Top of that list is Gail Peck. I just can’t understand why anyone would choose to spend five minutes with her. She hates people in general, which is sometimes understandable. Hey, people suck. But she’s the reason why. It was interesting to see Ben Bass again. He played the vampire Vachon on Forever Knight. Surprisingly he doesn’t appear to have aged in 20 years. I wonder… The Andy character just reminds me of Meredith Grey too much. I suspect much of that is intentional. I find Gregory Smith’s Dov to be the most grounded and realistic character on the series. He’s the only one there I might want to actually hang with. Still, it’s these young, attractive and emotionally flawed characters that trend well these days. Angst sells, and you’ll get your fix here. Just not sure I want hormone-driven, emotionally stunted horny rookies carrying guns in my neighborhood. Who am I kidding? They probably already do.

The 13 episodes are spread over four discs. The final disc includes a few extras. You get webisodes that offer 3-4 minute glimpses of the characters each in a therapy session. There’s some behind the scenes stuff split into a handful of short features that you can play all together for about 40 minutes of stuff.

There are two particularly stand-out episodes, and they happen to be the last two of the season. Cruz has been investigating off the books, and the consequences turn out to be tragic for those around her. The show builds toward something emotional that’s not about sleeping partners and demonstrates a true potential. Again, if that’s the kind of show it wanted to be, this could be really sweet. Instead it’s better than average fare for a rainy Friday night. “It’ll get you that much closer to the weekend.”

Gino Sassani is a member of the Southeastern Film Critic's Association (SEFCA). He is a film and television critic based in Tampa, Florida. He's also the Senior Editor here at Upcomingdiscs. Gino started reviewing films in the early 1990's as a segment of his local television show Focus. He's an award-winning recording artist for Omega Records. Gino is currently working on his 8th album Merchants & Mercenaries. Gino took over Upcomingdiscs Dec 1, 2008. He works out of a home theater he calls The Reel World. Favorite films: The Godfather, The Godfather Part II, The Body Snatcher (Val Lewton film with Karloff and Lugosi, not the pod people film), Unforgiven, Gladiator, The Lion King, Jaws, Son Of Frankenstein, The Good, The Bad And The Ugly, and Monsters, Inc.
Survival Code Transformers Energon: The Complete Series