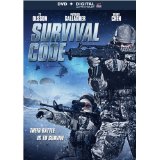 Made-for-TV movies are rarely remarkable works. Usually, they are poorly-written science-fiction films with laughable special effects, or some sort of dramatic “based on a true story” event. Survival Code, however, is one of those films that comes along every so often that truly has potential to become something bigger. And perhaps that’s where the film’s greatest weakness lies; it never really lives up to that potential.

Survival Code is an almost-post-apocalyptic tale of a world affected by global warming. The movie is set in a small settlement in the Canadian North called Borealis, a place where people go to fulfill their needs in a frozen wasteland. The town is governed by an ex-MMA fighter named Vic, who serves on behalf of the UN to not only maintain order, but keep the peace with a group of Russian officials. As usual, conflict arises, and Vic must partake in an old-fashioned cage fight against one of the Russians.

Despite the film’s clearly low budget, Survival Code has a lot going for it, the first of which is the well-crafted characters. Sure, there is very little originality in personalities; the sensitive whore, the charming addict, the troubled-yet-witty protagonist; but each is a well-done and enjoyable cliché of a ragtag group fighting for a just cause.

Much of this enjoyment, of course, comes from the actors themselves, who seem generally comfortable in their roles and deliver some surprisingly clever humor with confidence. While the writing shines in the dialog, it doesn’t carry over so well in the overall story. The plot is pretty loose, and suspension of belief is key to accepting most of the characters choices to resolve issues. Why decide the fate of entire nations on a street fight? Because it makes for a cool movie, of course. Though it’s fun, the story is often unfocused, setting up too many subplots and character arcs while pushing along the main storyline only because it needs to.

One of the most interesting parts of the movie, however, is the special effects. Low-budget films often don’t have much in the way of effects, but the filmmakers put a lot of energy into presenting a futuristic, yet realistic world. Everything from the airships to the neat anti-gravity fantasy chamber presents just the right amount of believability to wish for their existence.

I mentioned before that Survival Code never really lives up to its big potential, and here’s why: it doesn’t truly feel like a complete movie. Instead, the presentation, subplots, and overall writing seem like a pitch for something more, and it’s easy to see this movie as a failed pitch for what could have been a satisfying television series. Even though the movie had little in the way of groundbreaking ideas, I kept thinking about what could possibly happen next with these characters, which says a lot.

Ultimately, while Survival Code is a flawed, poorly paced film, it’s easily worth a watch because it’s fun. The characters are relatable, and the humor is genuinely funny at times. As a standalone movie, it disappoints, but viewing it as if it’s the first episode of a TV show it can be very enjoyable. It’s just a bit disappointing that we won’t get to see more.