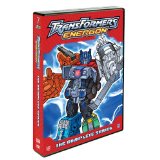 With a new Transformers film on the horizon, it is no surprise that the animated series finds its way on DVD.  Shout Factory releases the entire series of Transformers: Energon in a 7-disc set with 51 episodes that amount to over 18 hours of Transformer fighting goodness. Over the years there have been numerous incarnations of the hit animated series; just how well does this series fare?  Honestly it surprised me how much fun this series turned out to be, and it left me wishing that Michael Bay had drawn some inspiration from this series.

The series picks up 10 years following the last war between the Autobots (the good guys) and the Decepticons (the bad guys).  The Decepticons that remain work alongside the Autobots helping to collect energon, a resource that give energy to the Transformers. The humans are trying to harness its power as well.

It’s in Ocean City where the Autobots are mining for energon and where we meet Kicker.  Kicker is young and rebellious; his father is working with the Transformers in creating a way for humans to more efficiently utilize the power in energon.  When we do first meet Kicker, he’s pretty much just an annoying brat that seems to always want to tag along with the Autobots as they go on missions.  Thankfully as the series progresses they allow the character to mature, because to be honest I haven’t been this annoyed with a character since Jar Jar Binks in Star Wars: The Phantom Menace.

A new enemy emerges in the form of Alpha Q.  They send out an army of Terrocons to hunt down and discover new deposits of energon.  While this is going on a small group of Decepticons search out and discover the remains of their former leader Megatron.  Upon finding their leader they bring him back from the dead and from there work towards organizing an army to take down Optimus Prime and the rest of the Autobots.

The story starts to get complicated as we discover certain Transformers may not be loyal to their side as they may seem.  These betrayals lead to some great battles and even result into some intense deaths.  Granted in this animated universe, dying means nothing, since there seems to be a way to bring any of these giant robots back from the dead.

As the series progresses not only do we get to see some Dinobot action, but a character returns to the series from the original Transformer series Rodimus.  Rodimus and his crew have been traveling through the galaxy doing battle with whatever Decepticons that they may come across through the furthest points of the galaxy.  The series also brings us an ancient Transformer, Omega Supreme, that brings an extra element to the show.

My major complaint with the show comes in the form of the dialog between the characters.  Sure, this is a series for kids, but there is simply no engaging dialog to be found here.  For instance when a character seems to explain their plan for attack, it’s not even a plan that is explained but simply a statement of what they are doing.  If that’s not bad enough, when we know there is a conflict between Kicker and his father, instead of giving them scenes to flesh out their issues (after all something most fathers and sons can relate to) instead this conflict is just mostly ignored.  Even when there are characters having to deal with a loss of a fellow Autobot, we get the most simple generic dialog that just reminds us that they are nothing more than machines without feelings.  That would be fine for them just to be robots, but the show tries to express that these characters have a range of emotions like hate and the pain of loss.

When it comes to the animation, though it does capture the essence of the original series the movement of the characters just never seemed to have a natural fluidity.  At times when characters would be “moving” yet all that was moving were the backgrounds.  Considering every episode contains numerous fight sequences, it would become repetitive where we knew it would just result in a blaster battle, and when there were actual physical altercations between characters, it was short-lived.

With a sharper script the potential of what this series could have been frustrates me.  The story is all here; so are the cool characters and well-animated locations.  But had they developed the characters just enough; with better dialog the twists this show delivers would have had a greater impact.

Personally, it’s not so much that there is a favorite episode, but I really dug the idea of the characters travelling through a rip in the universe, travelling into the unknown just to continue their battle with their enemies.  How this turns out, well, I’m a little more underwhelmed by those events, but there are still plenty of things to kick back and enjoy here.  Considering two weeks ago I had never heard of this incarnation of the series, I came away from it enjoying it for what it was, and it’s something I feel I can watch with friends and still enjoy while taking in a nice bit of nostalgia at the same time.

Brent Lorentson is a horror writer and film critic based out of Tampa, Florida. With a BA in Digital Film, he co-wrote and co-directed Scavenger Hunt. His short stories have appeared in various horror anthologies. In 2019 his short script Fertile Blood will be a part of the anthology horror film Slumber Party. He is currently working on his first novel A Dark and Secret Place set to be released in late 2019. Favorite Films: Taxi Driver, Fight Club, I Saw the Devil, The Wild Bunch, Dawn of the Dead, A Clockwork Orange, Pulp Fiction, Heathers, The Monster Squad, and High Fidelity.
Rookie Blue: Season 4 Poseidon Rex