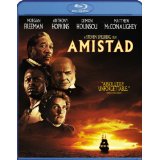 “Whoever tells the best story wins.”

This bit of lawyerly wisdom is given by John Quincy Adams in Amistad, Steven Spielberg’s account of a real-life 19th century slave revolt. President Adams is offering advice on how to mount the most effective case on the slaves’ behalf, but his words ring true well beyond the courtroom. Spielberg has been telling some of the best stories since the 1970s. Amistad may not be top-tier Spielberg, but the film — making its Blu-ray debut — is an absorbing historical drama in its own right.

Amistad opens with the brutal, bloody slave revolt aboard the titular ship. The sequence is notable for its lack of music — John Williams’ Oscar-nominated score first eases its way into the film shortly after the violence subsides — and for its animalistic intensity, which is a side effect of the dehumanizing nature of slavery. Not surprisingly, the humanity of the 40-something slaves on La Amistad — ironically, the Spanish word for “friendship” — is the crux of the film.

The 1839 revolt is led by Cinque (Djimon Hounsou), but he and his fellow slaves are eventually captured and brought to the United States, where they are imprisoned and charged with insurrection on the high seas. Although the international trade of slaves had been prohibited by the U.S., Great Britain, and Spain at the time, there’s no shortage of parties who want a piece of the slaves. The ship’s surviving owners state Cinque and company were born on a plantation in Cuba, which is controlled by Spain. Queen Isabella II (Anna Paquin) believes that makes them the property of Spain, while the ship’s owners stake their own separate claim on the slaves they acquired. Meanwhile, the captain and first mate of the U.S. vessel that found La Amistad wants the slaves too, citing marine salvage rights.

At its worst, I can see how Amistad plays like a dry civics lesson. But I personally find the grotesque, “slaves-as-property” legal arguments to be fascinating. (Spielberg would go on to revisit this theme in Lincoln.) Baldwin initially argues that “possessions” are incapable of committing crimes, much to the chagrin of the more humane Joadson and Tappan. The script by David Franzoni (Gladiator) dedicates a significant amount of time to showing the difficulty Cinque and the rest of the slaves have communicating and connecting with the world around them. It’s no coincidence that Baldwin’s case in court becomes stronger — and the movie becomes more affecting — once the lawyer takes an interest in Cinque’s personal story.

In addition to the stark, lyrical opening sequence — which might as well be dialogue-free for most people, since there’s not a word spoken in English — there’s a heartbreaking digression that depicts the capture of Cinque from Sierra Leone and his harrowing journey aboard the Tecora slave ship before ultimately arriving at La Amistad. The stuff on the Tecora rivals anything in Schindler’s List on the Atrocity Scale. (Both films were shot by Oscar-winning cinematographer Janusz Kaminski, who picked up a nomination for his work here.) Later on, one graceful scene illustrates why people like Cinque and his descendants in the U.S. gravitate toward Christianity. (Cinque, we also learn, previously had a David and Goliath-esque encounter with a lion.)

At 155 minutes, there’s a lot going on in Amistad. Not every narrative thread gets a chance to fully develop. This includes the suggestion that death (and the accompanying martyrdom) might be a better outcome for Cinque and the slaves. The film also makes a point of painting the Amistad case as a potential tipping point toward a civil war that could damage President Martin Van Buren’s (Nigel Hawthorne) re-election chances.

Some historians dispute the case’s importance as it relates to the country’s overall attitude toward slavery. If I were a historian, I’d probably find that stuff irritating too. But for any work of historical fiction, I look less for absolute accuracy — unless, of course, we’re talking about outright lies — and more for a filmmaker to create a convincing sense of time and place. Amistad succeeds on the latter front.

This was Hounsou’s first major role. The fact that the model-turned-actor is a physical specimen is a huge help because Cinque (and Hounsou) can’t really use words to convey his anger and frustration. It’s a performance that’s both soulful and glowering. Hounsou has gone on to earn two Oscar nominations, for In America and Blood Diamond, proving his strong work here wasn’t a fluke. McConaughey does good, lightly-cynical work early on — he’s basically playing a period version of his A Time to Kill character — but Baldwin is largely sidelined for the film’s final act. He’s still better off than Freeman, who doesn’t get very much to do at all with what was a potentially rich and complex character. Hopkins earned an Oscar nomination for playing the frail, forgetful and fierce former president. He probably earned the Oscar nom for Adams’ extended, climactic courtroom speech, but I enjoyed the actor more when he was painting a quirky, intriguing portrait of a former president.

Like Lincoln, the cast is rounded out with familiar faces. Standouts include the late Pete Postlethwaite as a slyly efficient district attorney and Chiwetel Ejiofor — in his feature film debut — as a Navy sailor who serves as a translator between Cinque and his defenders.

Amistad is among Spielberg’s least sentimental films, especially when it comes to the sequences aboard the slave ships. (The director still can’t quite help himself when it comes to a couple of key courtroom scenes.) As a result, it’s not as widely beloved as some of the other entries in the director’s awesome filmography. The film has its flaws, but to me those are overcome by the powerful ways it engages both the heart and the head.

Amistad is presented in an aspect ratio of 1.85:1. The 1080p image is arrived at with an AVC MPEG-4 codec at an average of 33 mbps. Unlike the other Spielberg film Paramount recently debuted on Blu-ray, the visual presentation here impresses right from the very start. The nightmarish slave revolt reveals deep black levels and an extraordinary amount of detail on close-ups. In contrast, the image is bright and warm during several sailing scenes and a visit to the nation’s capital. The image is exceedingly clear but not quite razor sharp, and there’s lighter filmic grain on display than I expected. Fortunately, the texture of the costumes and production design are still conveyed very well. In fact, the understated nature of the presentation faithfully matches the drab, muted palette of the frequent courtroom sequences. Overall, this is a terrific HD makeover for a film that isn’t really considered a visual dazzler.

The DTS-HD Master Audio 5.1 track sonically places us alongside Cinque in the bowels of La Amistad. Horrified screams and the rumble of thunder surround the listener. Soon, the track’s aggressive, immersive introduction gives way to the more serene sounds of waves in the rears and John Williams’ choral theme. Fidelity is on-point in this nicely-balanced track, with dialogue dominating the front channels. (Especially after the action moves into the courtroom.) I do suspect the harsh clinking of chains — captured well here by this track — was somewhat ramped up in the post-production stage. After the show-stopping opening, the track isn’t asked to do nearly as much, but it handles its duties extremely well.

The Making of Amistad: (26:33) This featurette examines the film’s 13-year journey to the screen, largely propelled by producer Debbie Allen. This was also the first movie Spielberg directed for Dreamworks, the studio he helped found. We get a relatively thorough look at the production, along with character/actor profiles for Hounsou, Freeman, Hopkins and McConaughey. Some of the actors who played slaves — including a descendant of Cinque’s — also talk about how the subject material (and the realistic chains) weighed heavily on them during filming. This recycled featurette is presented in standard definition.

Steven Spielberg has made undisputed classics like Jaws, Raiders of the Lost Ark, E.T., Jurassic Park, Schindler’s List and Saving Private Ryan. (Insert your personal favorite that I forgot.) But I’ve always marveled at the fact that his “second-tier” of films is stronger than most filmmakers’ very best offerings.

That’s precisely where I’d put Amistad. Not only does the Blu-ray offer a strong A/V update, but the movie itself skillfully and impactfully tells a story worth telling.