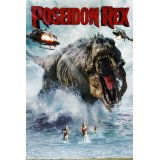 Poseidon Rex is a movie that, at the very least, should be able to be laughed at. It serves as traditional B-movie fare, littered with poor special effects, terrible acting, and clichés around every corner. Unfortunately, nothing screams of that “so bad it’s good” quality that we’ve come to expect from these kinds of monster movies. Poseidon Rex follows an average couple, Rod and Jane, during their vacation on a small tropical island. After an eventful snorkeling trip, the couple, along with their instructor Henry and a stranger named Jax, discover the existence of a prehistoric beast living deep in the ocean. Unfortunately for them, the terrifying T-Rex can survive outside of the water too.

It’s certainly not the first time we’ve seen dinosaurs causing mayhem, and even with the addition of an ocean-based tyrannosaurus, Poseidon Rex fails to produce any new concepts to make the film interesting. By viewing the trailer of the film, you can pretty much guess exactly where the movie is going. The plot is almost nonexistent other than the basic setup and ending needed to be called a complete story.

Of course, monster movies are rarely plot-heavy, as it’s the action and thrills that make these movies worth watching. Poseidon Rex doesn’t deliver on either front.  The action sequences are bogged down by terrible camera work and some of the worst special effects seen in modern film, even by low-budget standards, and the monster never truly feels threatening. Throughout the film, the creature attacks and kills several people, but for some reason it rarely destroys anything when on land. The T-Rex stumbles around populated environments and yet somehow never manages to take out a building or two in its wake.

It would all be OK if the film was at least enjoyable, even in an amusing way. Unfortunately, it’s even hard to write this review, as there is very little to say about it. It’s a shame that Poseidon Rex never really hits the bad notes in the right way, instead just serving an all-around bad and boring movie.