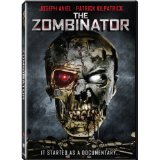 With a title like The Zombinator you basically know the kind of B-movie spectacle you are getting into.  Any notions of great special f/x or even a good script should be cast aside, and you simply have to tell yourself to sit back and enjoy the silliness that should follow.  But what the title did was build up these crazy thoughts of a cyborg from the future to take out hordes of zombies.  Well, this isn’t that movie.  Even the cover art gives promise to this kind of cheesy film, but there are no cyborgs from the future; instead we get another run-of-the-mill film about a documentary film crew that stumbles into trouble.

I don’t have a problem with this found footage/documentary style that seems to saturate the horror market these days but at the same time with so many films that get it right, you’d imagine all these up-and-coming filmmakers trying to emulate this style would latch on to what works and figure out ways to improve upon it.  George Romero’s Diary of the Dead, as well as the film Rec, are examples of how to do it right.  But what usually comes from these films are large doses of shaky cam and shots that never really show the viewer enough of what they want to see.

The Zombinator starts off as a simple documentary about a fashion designer, there really isn’t much of anything that occurs until she arrives at a party, though the party as it turns out is a wake for a fallen soldier who was a local to the small town of Youngstown.  The film really should have just picked up at the wake and saved the viewer those precious minutes of story that do absolutely nothing for the film.  As the party winds down and everyone is getting ready to go home, gunshots are heard, and from the darkness a horde of zombies attack.  There is nothing too remarkable about these zombies, nothing even menacing about them, but I can accept that to a point considering I always felt what makes zombies so threatening are their numbers and their insatiable hunger, not how they look.

The survivors move their way through town and eventually take cover in an old school where they happen to run into a paranormal research team.  I’m sure the film isn’t full of seasoned actors and most of the cast is made up of neighborhood friends, but here the acting is pretty rough and hard to take seriously.  At this point I was starting to feel going into this film sober was a bad idea.  After all some of the cheesiest films out there become more fun after a couple of drinks and perhaps this may be one of those films.

As for when the “Zombinator” (played by Joseph Aviel) finally arrives, well, he may have the look of a B-movie version of the Terminator, but really he simply turns out to be a soldier and come to find out this zombie outbreak is really a military experiment.  We don’t even really get to see him fight zombies but instead bark orders at the survivors he’s trying to protect.  I’m going to make the assumption it is budgetary reasons we don’t get to see the Zombinator go into full on zombie killing mode, because that is the payoff I kept expecting.

By the time the film comes to an end my reaction wasn’t of relief that it was over, but instead I felt a little cheated.  I don’t hate the movie, I just feel underwhelmed.  When it comes to the numerous characters that are in and out of the film, none of them seemed to really matter.  The character given the most to work with isn’t even in the film; it’s the character that the wake was for.  We get so much information about the guy and mystery surrounding his death, and not once does he appear beyond being in a photo.

I’m a fan of low-budget and micro-budget horror, but I’m having a difficult time finding something that other fans of the genre would enjoy with this film.  With a little more story direction and more connection to the title this film could have been a fun little film but instead it’s flat and undead on arrival. “Hasta la vista, baby.”

Brent Lorentson is a horror writer and film critic based out of Tampa, Florida. With a BA in Digital Film, he co-wrote and co-directed Scavenger Hunt. His short stories have appeared in various horror anthologies. In 2019 his short script Fertile Blood will be a part of the anthology horror film Slumber Party. He is currently working on his first novel A Dark and Secret Place set to be released in late 2019. Favorite Films: Taxi Driver, Fight Club, I Saw the Devil, The Wild Bunch, Dawn of the Dead, A Clockwork Orange, Pulp Fiction, Heathers, The Monster Squad, and High Fidelity.
Poseidon Rex I Frankenstein (Blu-ray 3D)