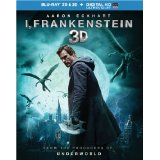 “I was cast into being in the winter of 1795 a living corpse with a soul, stitched, jolted, bludgeoned back to life by a madman. Horrified by his creation, he tried to destroy me…”

We all know the story told by the young teen wife of a poet: Mary Shelley. Told to entertain guests on a stormy night, it has become the stuff of legend. Brought to life by Colin Clive’s mad scientist in the shape of Boris Karloff in the Universal Golden Age of horror, the monster has had a face. Since that time studios from Hammer to Paramount have left their own marks and scars on the creature that often mistakenly bears the name of his mythic creator. The name of Frankenstein.

Enter the folks at Lakeshore who brought us the modern vampire/werewolf Underworld franchise. What started as an idea from Underworld actor Kevin Grevioux and sewn into a coherent screenplay by director Stuart Beattie has become a CG-laden 3D extravagance. The box office didn’t breathe much life into the film, and now it finds its way on 3DBD where, it appears, it belonged in the first place.

The film begins with a quick recap of the events from the original story with its own embellishments and style. The flashbacks are actually impressive and had me longing that they had just started from the beginning and told that tale first. What follows is too much like a third or fourth sequel to a movie that was never made. The visual style of these flashbacks could have added a clever and compelling reason to retell the complete story. There’s promise here that takes away, at least a little, from what follows.

After killing his creator, Frankenstein’s monster (Eckhart) encounters a horde of demons that have targeted him. He’s rescued by another cadre of creatures that are revealed to be a holy order of gargoyles. This is where we’re introduced to a war that will bring back your first memories of Underworld. The gargoyles are the “good” guys. When they are killed they turn into shafts of bright white light and ascend up to Heaven. The demons are the “bad” guys. When they are killed they are reduced to pillars of fire heading in the opposite direction. It’s a nice clever little idea, but when the battles get intense you can imagine how busy the screen gets. Amidst the fighting there are too many pillars of fire heading to Hell, and before long the screen is completely inundated with the aftermath that we lose sight of the actual fighting.

The leader of the gargoyles is Queen Leonore (Otto). She gives the monster a name, Adam. She also reveals that the demon leader, Naberius (Nighy) wants Adam so that he can discover the secrets of life developed by the now late Frankenstein. He wishes no part of their war, only to settle his own score with Naberius. Fade to 200 hundred years later and modern time.

Naberius is a rich guy now leading a research team into developing the technology to reanimate the dead. It seems he has an entire army he wishes to bring to life. All of this is unknown to his lead researcher Terra (Strahovski). She finds herself caught in the middle when Adam comes calling and all-out hell breaks loose between Adam and the demons with the gargoyles adding their dwindled numbers to the fray. It’s an end of mankind scenario with epic battles and f/x crazy set pieces. Spoiler alert: the good guys win, and we’re set up with Adam to be some kind of superhero, declaring that he’ll be there to fight the evil folks when he’s called upon again.

The Underworld elements can’t be denied here. The weaponry is of the same kind of designs. Curved blades and strange markings look like they could have come easily from the same universe. The battle that mankind is unaware of is also straight out of the Underworld bible. This one stretches that to its most unbelievable. With the skies filled with flying gargoyles swooping every which way and epic explosions complete with those pillars of fire and light, how could anyone miss the dang thing going on?  I’m more than happy to suspend my disbelief, but you can’t have it both ways. You can’t call this a secret story and deliver such massive effects.

The actors include more than a couple Underworld veterans, not the least of whom is Bill Nighy. Once again he turns even a rather silly plot into something much more sinister and believable. His voice alone adds a gravitas to his roles. He’s larger than life but with nary a hair out of place or a wrinkle on his fine Italian suit. Kevin Grevioux who came up with the basic story and original graphic novel was a part of Underworld. He’s also unmistakable. His huge bulk and deep voice mark him undeniably. He’s a power of a completely different kind. From Klingons to comic book voiceovers, you won’t find any voices more distinct. Of course, he plays muscle here.

The cast also includes Aaron Eckhart as the monster. The makeup effects are actually pretty good and ease up as he moves into modern times. He carries the scars of his creation, but he’s not so disfigured that he would be out of place particularly in a large city today. Eckhart plays him a bit as a comic hero and there’s certainly more 4-color than black & white monster to him. Obviously, he’s not the lumbering creature of yore. He’s got the kind of moves that have become a staple in these films. The kind of style that lends itself to slow-motion killing sprees with plenty of freeze-frame for those crucial slice-and-dice moments. I have to say it became increasingly harder to think of him as Frankenstein’s creation after a very short time. Thus, while a cool action/fantasy film, it stopped being “Frankenstein” very early on. Likely that contributed to the box office failure as the audience was expecting a different kind of “creation”.

Ever since Chuck I’ve been a fan of Yvonne Strahovski, who most recently went toe to toe with Dexter. Unfortunately, she doesn’t get the strength of role here she should have gotten. There’s great promise here, but she ends up playing the helpless pawn more than she should have. Miranda Otto is a little stuffy as the gargoyle queen, and the performance never completely kicks in. I don’t think she took the role very seriously. She appears a little embarrassed to be here, and she’s the more morally ambiguous character of all. Not an easy part to get your footing. I can’t say I blame her for not quite pulling it off. Jai Courtney has bigger things on his plate these days with Divergent and its follow-ups. He’s the strongest of the gargoyle characters, and unlike Otto he commits to the insanity. He has pretty good chemistry with Eckhart that’s never really taken advantage of. Big missed opportunity there.

The film is larger than life and absolutely entertaining. The CG elements get a little too much like a video game at times. The earlier narration to modern times almost feels like an extended cut scene. But there are some exciting visuals, and there’s definitely fun to be had here. It looks like a real good direct-to-video film, and that’s where it’s going to find any success it ultimately attracts. It’s absolutely worth a look, if not a $12 theater ticket.

I Frankenstein is presented in an aspect ratio of 2.40:1. The high-definition 3D image is arrived at using the standard duel MVC codec at an average 35/17 mbps. No question this image presentation pops. Unfortunately, there is some digital noise, mostly in the background. It plays out more like bad grain than compression artifact. Both 3D and 2D are on the same disc, and that could be an issue when you include features. It’s a dark and cold color palette very much like Underworld was but not quite so blue. This one looks like a pale green most of the time. Color never really pops except during fire displays. It’s the only real bright spot in an otherwise intentionally drab film. That being said, there’s a ton of texture to this film. Peeling paint inside of Adam’s apartment or the stone surface of the flying gargoyles, it’s all highly textured with plenty of detail.

The DTS-HD Master Audio 5.1 is about as aggressive as they come. I did have to crank the volume a bit, so it doesn’t have a good low volume response. Dialog is clear at all times. The subs take over during the epic battle scenes, and the score is both rousing and vibrant. I’m quite serious about the sub. It can really take over when things are going hot and heavy.

There are two Commentary Tracks. The first is just director/writer Stuart Beattie. Beattie keeps quite a hectic pace as he covers just about every aspect of the film. He delivers as much inside information as you could ask for. The second track features Producers Gary Lucchesi, Richard Wright and James McQuaid and writer Kevin Grevioux. Obviously, this one is more conversational. The interaction may not provide as much information but is more entertaining.

Both 2D and 3D versions on the same disc.

Creating A Monster: (1300) This feature focuses on the makeup f/x for Adam and the various creatures. I was happy to see how much practical stuff they did. Transitions are computer-generated, and the flying gargoyles are obviously CG. Most of the demon work is still makeup. Very cool.

Frankenstein’s Creations: (14:18) This one delves into the story ideas and the characters. Many of the cast get to offer insight into their characters.

I’m a fan of the Underworld films, for the most part. Whether it was by design or not this film feels almost like a spin-off and so by that very nature a sequel. As much as I hate to admit it that franchise has likely been tapped dry, and this one doesn’t add to the world. None of the female leads here are Kate Beckinsale and Sony learned quickly what Underworld was without her. That doesn’t mean we can’t play in this world a bit and still be entertained. I still want to see them go back to the familiar story and tell it in this style. Alas, with box office numbers what they were I don’t know that we’ll be seeing any more play time in this sandbox. It’s the kind of movie where you have some fun watching but easily move on. But if they do decide to open the sandbox for a little more playtime, “know that I am out there”.

Gino Sassani is a member of the Southeastern Film Critic's Association (SEFCA). He is a film and television critic based in Tampa, Florida. He's also the Senior Editor here at Upcomingdiscs. Gino started reviewing films in the early 1990's as a segment of his local television show Focus. He's an award-winning recording artist for Omega Records. Gino is currently working on his 8th album Merchants & Mercenaries. Gino took over Upcomingdiscs Dec 1, 2008. He works out of a home theater he calls The Reel World. Favorite films: The Godfather, The Godfather Part II, The Body Snatcher (Val Lewton film with Karloff and Lugosi, not the pod people film), Unforgiven, Gladiator, The Lion King, Jaws, Son Of Frankenstein, The Good, The Bad And The Ugly, and Monsters, Inc.
The Zombinator One Direction: Reaching for the Stars Part 2 — The Next Chapter