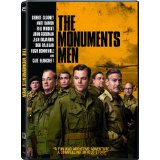 The World War 2 genre has been done to death by Hollywood, but The Monuments Men gives us a fresh look at the war and delves into a story that is a breath of fresh air to the genre.  Despite all my history classes that delved into the atrocities of World War 2, it was never discussed about what happened to the great landmarks that were spread throughout Europe and encountered the cold hand of war.  Granted, when measured against the staggering amount of lives lost throughout the war, the thought of a sculpture being destroyed or a Picasso painting being incinerated simply seems petty by comparison.

In 1943 as the war seems to be making its final push toward the defeat of the Nazi party, Frank Stokes (George Clooney) delivers a pitch to President Roosevelt about the importance of preserving the art of the past before the war destroys it all. His pitch is passionate though idealistic, but still it is enough to convince the president that assembling a small unit simply to help preserve certain classical monuments couldn’t cause any harm.  Stokes goes on to gather a team of scholars, most of whom are well past their prime, to join him on this quest to protect and preserve the past.

Listening to Stokes and his pitch, I couldn’t help but think this would have been a great story for an Indiana Jones film; after all, this would have been right up the good professor’s alley.  But it should be noted early on, this isn’t so much an action adventure tale; the team dubbed The Monuments Men instead comes in after all the bloodshed mostly to pick through the remains of what has been destroyed.  But an appreciation for the art world is not simply a one-sided coin.  The Nazis have curators of their own, given orders to find and obtain some of the world’s most precious masterpieces so they can hopefully be put on display in a museum designed by the Fuhrer himself.

The two key pieces of art that seem to drive our team into more and more precarious situations are The Madonna of Bruges (a sculpture created by Michelangelo) and the Ghent Altarpiece (a piece that consists of 12 individual pieces).  Along the way, sure, they discover some beautiful pieces of work, but it’s these two master works that set our team off to discover the fate of the works.

Lt. Donald Jeffries (Hugh Bonneville) tasks himself with going off to pursue The Madonna at its last known whereabouts which takes him deep behind enemy lines.  There is also Walter Garfield (John Goodman) and Jean Claude Clemont (Jean Dujardin) who set off together in search for leads on missing pieces.  But it is the duo of Preston Savitz (Bob Balaban) and Richard Cambell (Bill Murray) that kept me smiling the most throughout the film.  There is a small moment in the film where we see these two men who seem to be reluctant friends, but when Cambell receives a message from home and Savitz helps make it possible to hear this personal message, it’s a scene that gives a gentle tug to the heartstrings.

As for James Granger (Matt Damon), he is tasked to go into France where he is put into contact with Claire Simone (Cate Blanchett), a former secretary to a high-ranking official in the Nazi party who is in custody on suspicion of being a spy.  Simone, though, is a fellow art aficionado and wants nothing more than to help find and preserve all the stolen art, and she happily obliges to aid Granger in any way she can.  This relationship also develops into the only thing resembling a romance in the film.  Seeing Granger and Simone innocently flirt (perhaps Simone is not so innocent) is what adds to the film’s charm.

As the Monuments Men continue to close in on these stolen pieces the danger only increases, and when we see one of the men fall as a casualty to their task, the question is brought back to the forefront.  Is a piece of art worth the life of another man?  This is a question that each member of the team is faced with, and as a viewer the question is posed to us as well.  Among the atrocities committed by the Nazis as at one point a barrel is uncovered filled to the brim with gold fillings that have been removed, should a painting really matter?  I appreciate the intention, and had this been a mission from the start of the war I would have a hard time siding with Stokes and his team, but as the film falls into its later acts, it became easier to agree with the actions of these men.

Some may look at the film and simply find it a ridiculous reason to ever get involved with any war.  But upon reflection I have to agree with the actions of these men and say that art can be a worthy cause to die for.  Art, whether it be paintings, buildings, books, etc. are all we have to leave behind for future generations, and without that, what is there to show our mark in the world? When all is said and done with the film, will this be a film remembered decades down the road?  That is highly unlikely, but the result is still an entertaining romp through a genre that is normally filled with bloodshed; instead this time we get more laughs, and that’s not such a bad thing.

Brent Lorentson is a horror writer and film critic based out of Tampa, Florida. With a BA in Digital Film, he co-wrote and co-directed Scavenger Hunt. His short stories have appeared in various horror anthologies. In 2019 his short script Fertile Blood will be a part of the anthology horror film Slumber Party. He is currently working on his first novel A Dark and Secret Place set to be released in late 2019. Favorite Films: Taxi Driver, Fight Club, I Saw the Devil, The Wild Bunch, Dawn of the Dead, A Clockwork Orange, Pulp Fiction, Heathers, The Monster Squad, and High Fidelity.
Godzilla (2014) Sophia Grace & Rosie’s Royal Adventure (Blu-ray)