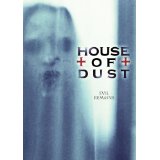 When it comes to locations in horror films, insane asylums seem to be one of the go-to spots, and with good reason.  From watching numerous ghost-hunting shows over the years, it would also seem that there are numerous “haunted” asylums out there that are nothing more than rundown relics of what they once were.  So getting into House of Dust and seeing it is yet another haunted asylum film, the expectations went down, and I hoped for the best.  In the end it turned out to be a fun little film.

When we first meet Emma (Inbar Lavi), her family is dropping her off at her new school.  She’s the quiet type who just wants to fit in with the other college students, and it’s not long after her arrival that she catches the attention of Kolt (Steven Grayhm).  The two hit it off at a late night bonfire where the two go off with Kolt’s friends, and they eventually find their way into an abandoned section of the campus that at one time was a facility for mental patients.  Of course there is an urban legend attached to the location, but thankfully the film avoids following the local stories and goes its own path when Kolt and his friends have ashes spilled on them while they are investigating the location.

As for what happens with Emma, well, she may get to dodge being possessed by former mental patients, but she is still affected by her investigation of the location.  What makes Emma different is that she is a girl with a past, a past that left her in the custody of the mental ward at one time.  While Emma struggles with controlling her sanity, the hold the spirits have on the students seems to come and go, causing them to seem as though perhaps it is they who are really going insane.

Though these characters seem to know what “they” are doing while being possessed, when they snap back to their normal selves they don’t seem to be all that proactive about what seems to be happening to them.  One character is on the cusp of sexually assaulting a girl before he is pulled back to reality.  The fact that he does nothing to remedy this, nor do the girls that were witnesses to this scene, just didn’t work for me.  There’s never a moment of helplessness; it’s as though the students are fine with the notion of being puppets to the spirits that are inside of them.

Basically, because there never seems to be a sense of urgency from any of the characters, the element of horror just never seems to arise.  Considering this is a horror film, I feel that is a bit of a problem.

Thankfully the story is at least tight and allows the film to never overstay its welcome. Director A.D. Calvo does show promise, and hopefully with the right script he can present a more engaging tale.   As a late-night Netflix film it works as something to watch and pass the time, but most likely you’ll have forgotten the film by morning.

Brent Lorentson is a horror writer and film critic based out of Tampa, Florida. With a BA in Digital Film, he co-wrote and co-directed Scavenger Hunt. His short stories have appeared in various horror anthologies. In 2019 his short script Fertile Blood will be a part of the anthology horror film Slumber Party. He is currently working on his first novel A Dark and Secret Place set to be released in late 2019. Favorite Films: Taxi Driver, Fight Club, I Saw the Devil, The Wild Bunch, Dawn of the Dead, A Clockwork Orange, Pulp Fiction, Heathers, The Monster Squad, and High Fidelity.
Mischief Night 3 Days to Kill (Blu-ray)