Posted in: Disc Reviews by Archive Authors on May 21st, 2014 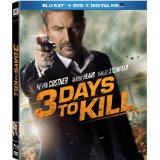 Most action pictures have an aura of super-seriousness, or they are filmed as comedies and everything is meant to be ridiculous. It definitely is a difficult task to mix the two effectively. On some level most action pictures are ridiculous, since most of us will never experience the close proximity to death and danger that is depicted on the screen. Also, life and death are often cheapened with high body counts but little consequence for our hero. In 3 Days To Kill, all sorts of elements are brought to bear in order to reinforce the average everyday family experience and not the lone killer. Early on, a different sort of danger affects our hero. It’s not bullets and bombs but a rare disease that is likely to kill him in the very near future. As a spy, he has always neglected family to the extent that his teenage daughter barely knows him. Ethan Renner (Kevin Costner) is intent on changing that.

The film is directed by McG and written by Luc Besson, both filmmakers with impressive credentials, but I’ll get back to that later. The real focus is Kevin Costner as an aging and battle-weary veteran CIA agent who is always counted on to take out whatever targets are assigned him. During a particularly explosive encounter in a Serbian hotel, he begins to get dizzy after chasing one surviving member of a gang. He is subsequently hospitalized and told he has maybe six months to live, and thanks for his service. He leaves the hospital determined to reconnect to his wife, Christine (Connie Neilsen), and daughter Zoey (Hailee Steinfeld).

He moves back to his apartment in Paris only to find it full of a large family of Ethiopian squatters. The French laws give them leeway to stay for a period of time, so Ethan learns to adapt grudgingly. He has bigger problems trying to get along with his grown daughter, who is prickly and unforgiving. During all this, a high level CIA manager, Vivi Delay (Amber Heard) plays a cat-and-mouse game with Ethan. She’ll give him an experimental drug that might buy him more time, but only if he carries out an elaborate series of operations to crush a weapons cartel. He agrees but attempts to get a guarantee that if he succeeds, then he is out. Vivi is a cagey and odd character who never reveals much but clearly thinks Ethan is her man. The balancing act begins, and I’m talking about the task that the filmmakers have set out for themselves. The action scenes are never less than go-for-broke, but comic scenes and scenes of pathos are also scheduled regularly and placed through the film. You might get whiplash from the change in tone, but it never gets boring.

McG (Charlie’s Angels, The O.C.) and Luc Besson (Taken, The Transporter) are both top producers/writers/directors with long, successful resumes, but as the hyphenates suggest, they tend to like to do everything, much like this movie. They also both like to ladle everything on hot and heavy, so they are a good match.

Costner is a good anchor to this crazy merry-go-round. He brings full commitment to all his scenes and is gamely up to the many demands of the part. I always thought Costner has displayed one of the most reliable screen presences. As a movie star, he has always been rock-solid. If one looks at a somewhat similar film, True Lies with Arnold Schwarzenegger, we were never honestly able to believe in the family relationship, but the premise was fun. With 3 Days To Kill, the humor and pathos is never done with a wink. It is given full weight.

3 Days To Kill is presented in its original aspect ratio of 2.40:1. The 1080p image is arrived at with an AVC MPEG-4 codec at an average 30-35 mbps. The high-definition image presentation is quite warm. Ambers dominate the hues, and colors are overall very soft. There’s a car chase that appears almost monochromatic. Long shots get lost in this kind of style, but close-ups reveal fine detail. This is most evident on faces. The Paris locations provide plenty of eye candy, and the image does a good job of delivering them with nice texture and detail. You get the sharpness you’ve come to expect in a digital film. There are moments the image goes over-bright as part of a style choice. Rest assured that what you see is very much what was intended from the outset.

The DTS-HD Master Audio 5.1 is not an overly aggressive one. Yes, there are moments when the surrounds deliver enough to give you an immersive experience. There are the usual gunfights and car chases where sounds come at you from all directions. Much of the film is intimate in nature and appears close. This certainly applies to much of the dialog. The subs get a few moments but never truly deliver the kind of pop some of the action scenes call for.

There is an extended/unrated version of the film avail. It runs about six minutes longer.

The Making Of 3 Days To Kill: (9:55) Cast and crew dominate this feature. They talk about the things that drew them to the project. There’s a lot of the usual love-fest stuff going on here. Everybody simply adores everybody else. There’s plenty of behind the scenes footage and too many clips.

McG’s Method: (4:39) The director talks about working with a predominately French crew and the challenges that provided. Both McG and the cast talk about what it was like working in Paris.

Covert Operations: (5:08) Meet Robert Baer. He worked for the CIA for over 20 years and serves as a consultant. He tells us what it was like and the effect it has on trying to have a family.

I can’t say it completely works, and it is meant to be light entertainment, but overall it has its charms. Costner certainly takes it seriously, and that helps. I don’t know if it’s necessarily a fun film for the whole family, but it’s not bad for the dog days of February. It’s also interesting to watch someone spending a day racking up a high body count and still making it home for family dinner.