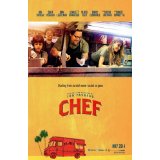 Chef has a fantastic cast having fun, being sexy and making us happy. It must have been a blast for everyone involved. Everyone is probably involved because they love writer/director/star, Jon Favreau. Favreau’s directorial efforts are varied and include Iron Man I, Iron Man II, Cowboys and Aliens, Zathura, Elf and Made. He made an early impact in 1996 by writing and starring in Swingers. He is also familiar to audiences as Happy Hogan, Robert Downey Jr.’s security chief, in the Iron Man series.

Now Favreau is back to running the show with a personal Indie project.

Carl Casper (Jon Favreau) is head chef for a restaurant owned by Riva (Dustin Hoffman). A big-shot food blogger is coming to the restaurant that night, and Carl is ready. Unfortunately, Riva lays down the law that he should cook what is on the menu full of customer favorites. Carl knows he should do something edgy or fresh, but Riva is near apoplectic. Carl thinks it best to not go all diva in response. I will say things go very bad before they get worse.

Inez (Sofia Vergara of Modern Family) is his friendly and supportive ex-wife. She wants Carl to spend more time with their son, Percy (Emjay Anthony of the recent series Rake). Carl is driven and passionate about his cooking and does realize he has been a little neglectful. If it wasn’t for Riva, everything would probably be fine, but Carl tries to hold it together. He bonds with his son as often as he can while he deals with all the stress. Percy gets him on Twitter when his kitchen staff talks about Twitter blowing up because of some public screaming and yelling. There’s a rematch with the blogger that goes even worse when Riva interferes again.

The cast fills out with big names like Scarlett Johansson, Robert Downey Jr., Bobby Cannavale, Oliver Platt, Amy Sedaris, Russell Peters, and John Leguizamo. Clearly, that is some heavyweight talent for a little indie film. Everyone has fun with their roles like the filming was a big party. That’s easy to understand, since there is a lot of great food being cooked in the film.

Carl quits after one too many ultimatums from Riva. Inez appears to be a big-shot model who has a shoot in Miami and asks Carl to come with her to be with Percy. She also suggests a food truck as a way to cook whatever he wants. She gets another of her ex-husbands (Downey) to finance it. Downey hams it up as a super jerk. Again, Carl holds it together.

He gets the truck, which is a mess, but Carl gets Percy to help clean it up. It has good bones. Carl becomes enamored with the real Cuban sandwiches. I have to admit I am getting hungry just thinking about the food in the movie. It does all look delicious. Stay for the end credits where a real chef shows Favreau how to make a super-mouthwatering grilled cheese.

Percy gets Twitter going crazy from the beginning as they take the country by storm, driving the food truck to LA. Miami, New Orleans, Austin; are all fun stops where the local foods are featured heavily. John Leguizamo as Martin is his second in command, but Percy also becomes a great cook.

Chef functions as a great family film and a food showcase. It all feels real and lived-in. The characters are all spontaneous and fun. We are going to have a long summer of big blockbusters, but one can hope that Chef will be serving us until the end of the year. This an unexpected feel-good hit.