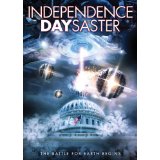 “America is under attack on the fourth of July.”

With a title like Independence Daysaster, you’d probably be expecting a ripoff of 1996’s Independence Day, and you wouldn’t be completely wrong. Although Daysaster does share some aspects such as the Fourth of July and the obligatory blowing up of the White House, its plot is vastly different.

In Daysaster, an armada of robotic spheres from space awakens a dormant system of terraforming machines from within the Earth. It takes a small ragtag team made of President of the United States Sam Garcette (Tom Everett Scott), his brother Pete (Ryan Merriman), and S.E.T.I Scientist Celia (Emily Holmes) to put an end to the hostile alien threat. Along with them is the president’s son Andrew (Keenan Tracey), his two friends Eliza (Andrea Brooks) and Nick (Casey Dubois), and hackers Todd (Iain Belcher) and Leni (Grace Sherman).

Normally when you sit down to watch a Syfy Original movie you tend to have the understanding that you’re setting yourself up for poor CGI and mediocre acting. Needless to say, Daysaster definitely doesn’t skimp out on any of that; in fact it transcends it. Surprisingly, the CGI is the least terrible part of this movie. Daysaster suffers from a multitude of problems ranging from its directing and editing, all the way to the acting and writing.

The reasoning behind director W.D. Hogan’s idea to use handheld cameras throughout most of the film is beyond me. The effect made it seem as though the movie’s budget was so low that they couldn’t even afford a tripod.  Everything was smooth and well shot up until six minutes in, whereas after that it looks as though all logic was then thrown out in favor for the unsteady handheld look. There is the occasional shot every now and then where the camera work goes back to being smooth, but this is mostly used for wide and long shots. I would be able to excuse it for the action shots, but it’s not just the action shots; it’s pretty much every shot. The shaking and constant zooming in and out made every single conversation look as though it was something from NBC’s The Office. The effect wasn’t nearly as bad as what you would find in a found-footage film, but was bad enough to give me a slight headache.

Alongside the directing, the editing in Daysaster seems extremely questionable. The scenes tend to run on longer than they should, leaving a lot of the already poorly-written dialog looking even more awkward. The pausing and time between people talking leaves each scene feeling off and unsettling. One instance of this is at the beginning with the humming of the Star Spangled Banner that feels like it goes on just a little too long, another during the first time that Pete and Celia meet and Pete seems unsure as to whether he is willing to give Celia a ride into town. It honestly feels as though some of the scenes were kept uncut just to make the movie longer than it actually needed to be.

The acting definitely wasn’t the worst I’ve seen in a movie, but it definitely wasn’t the best. A lot of the acting either came out being over-the-top or extremely underwhelming. The outcome of this is a bunch of characters behaving calmly in intense situations, or overreacting in the minutest of scenarios. It often felt as though the actors were just reading off their lines instead of actually acting them. The biggest offender of the off balanced acting would be Tom Everett Scott. From start to finish, Scott’s character Sam never once seems to lose his temper or get the slightest bit upset with the events at hand, and he is the president. You’d expect that the president would be emotionally invested in the fact that his country is getting torn to shreds by an unknown force. Now, I do understand that some people have the ability to keep cool in the most extreme of situations, but when I am watching a movie about an alien invasion I expect to see people freaking out and losing their minds. It’s not like this sort of thing happens every day.

The biggest problem I had with Daysaster has to have been the writing. I know that the dialog was making up for the lack of budget by trying to explain things, but it did such a terrible job at it. We know there is an alien invasion going on, but we don’t know why. The only reasons we get for what’s happening come from Celia. It would be fine if everything she said was a more educated and backed up, but her guesses as to what’s happening during the whole movie seem to just be a bunch of potshots in the dark. Besides our whole knowledge of the invasion being just guesses, the movies explanation as to why certain things do what was just lazy, as though they tried to avoid going into detail. If there is one thing I hate more than anything when it comes to movies, it’s when the movie feels that the audience watching it is too stupid to understand anything. The phonon gun is the biggest deus ex machina in the whole movie, and yet when they go to describe what it does and how it works, we’re just left to believe it’s “not important”. Luckily for the watcher, the movie realizes its fault and finally describes what the phonon gun does later in the film, but by then it doesn’t even matter anymore.

With all that being said, this is a Syfy Original movie, and that means the movie probably wasn’t made with the intentions of being great or going on to win an Oscar. Since it was made for TV, the budget probably wasn’t the best, and the writing may have been rushed or just written with caution to the wind. Even for a B movie, Daysaster wasn’t that great. The movie had the potential to be a pretty decent story, but the way that it was executed just made Independence Daysaster a disaster.

Chef Way of the Wicked (Blu-ray)