Way of the Wicked (Blu-ray)

Posted in: Disc Reviews by Brent Lorentson on May 26th, 2014 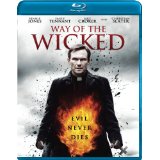 Christian Slater has managed to make a decent career lately by simply appearing in numerous direct-to-DVD productions for several years now.  It seems as though every month the former 80s-90s heartthrob is slumming his way through productions as though he never once looked at the script and instead was just adding another lackluster credit to his IMDB profile.  As a longtime fan of the actor from the days of Heathers, True Romance, and Pump Up the Volume, I can’t help but hope the guy will make a resurgence (though appearing in Lars Von Triers Nymphomaniac is a good start to that career revival).

As for Slater’s new release Way of the Wicked, he somewhat takes the back seat on this film despite appearing on the Blu-ray box art.  Henry (Slater) is a priest who seems to have an obsession with a young boy who is held responsible for the murder of a classmate even though there was no physical evidence to show for it.  Several years later Robbie (Jake Croker) returns to the small town, and as he returns to school he immediately seems to embrace the role of outcast.

Everyone seems to have their suspicions about Robbie with the exception of Heather (Emily Tennant), who happened to be with Robbie when the young boy was killed.  Heather couldn’t be more opposite from Robbie; she is vibrant and beautiful and is sought after by the boys at her school, but after Robbie returns she seems to only have eyes for him.  No one seems to want to trust Robbie or believe his innocence, especially Heather’s father, John (Vinnie Jones) who just so happens to be a cop.  The biggest surprise for me in the film is the performance Jones actually delivers.  He’s come a long way from being a thug in early Guy Richie films.

Just as Robbie returns, this seems to be when weird things start occurring in town, one of which concerns a student at the school being run over by a tractor that doesn’t have a motor.  Of course Robbie is the number one suspect, and he doesn’t do much to give reason to believe differently.  With another “victim” connected to Robbie, Henry takes this information and seems to believe this is all the proof needed to label Robbie the anti-Christ.

If someone were to remove the religious element to the film, it could have worked well as a small thriller, but instead we get a film that boasts something so spectacular but does little to convince the audience to believe Robbie could be anything but a troubled teen.  Had the supernatural element been played up more and we actually saw characters acting “evil”, then perhaps I could have been sold on this film, but there was simply nothing there.  But the most harmful thing to this film is the performance of Robbie by Croker.  Whether this was a decision made solely by the director or the actor is unknown, but this has to be one of the stiffest performances I’ve seen to date.  Emotion is non-existent with this character, and to label him a sociopath would put it all wrong because he seems to be in love with Heather, but we never get to see this from the character.

On a bright note, director Kevin Carraway, who previously worked on 7 Below, seems to continue to show improvement as a director and manages to deliver a tight, nice-looking film.  All this director needs is the right script, and he’ll be a director to keep an eye on in the future.

Way of the Wicked is presented in an aspect ratio of 1.85:1.  The 1080p image is arrived at with an MPEG-4 codec at an average of 24 mbps.  For the most part this is a good-looking film, though it does suffer from being a tad over-lit with the interiors, most notably in Heather’s home.  There are some slight compression issues at times but nothing that I’d consider too distracting.  The overall look to the film seems a bit over-lit, though the skin tones appear natural.

The DTS Master Audio 5.1 track is a bit lackluster for a thriller in my opinion.  Though the film has a decent amount of ambient sound, there is very little in the way of a score that invokes a feeling of dread, or any mood for that matter.  Though the dialog is clear and comes through fine on the front speakers, there was little opportunity for there to be a robust sound track.  For the scenes of conflict there is at least an attempt made to utilize all the speakers.  Overall, though, the track is just about average at best.

There are no special features on this disc.

Way of the Wicked really could have been one of those films that leave you with a bad taste in your mouth.  Thankfully the film turns out to be a fun little film.

Brent Lorentson is a horror writer and film critic based out of Tampa, Florida. With a BA in Digital Film, he co-wrote and co-directed Scavenger Hunt. His short stories have appeared in various horror anthologies. In 2019 his short script Fertile Blood will be a part of the anthology horror film Slumber Party. He is currently working on his first novel A Dark and Secret Place set to be released in late 2019. Favorite Films: Taxi Driver, Fight Club, I Saw the Devil, The Wild Bunch, Dawn of the Dead, A Clockwork Orange, Pulp Fiction, Heathers, The Monster Squad, and High Fidelity.
Independence DaySaster Only Lovers Left Alive