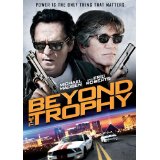 The tagline for Beyond the Trophy definitively states that “Power is the only thing that matters.” Well, having watched this low-budget cops and kingpins crime drama, I humbly disagree. The film strives to tell a story about the violent perils of all-consuming power. Unfortunately, Beyond the Trophy forgot to include some of the stuff that matters to movie-watchers: things like “focused storytelling”, “coherent action sequences”, and “fresh characters.”

The film opens “somewhere in the Caribbean” where a hitman catches up to lounging, unsuspecting Danny (Michael Masini). The action then flashes back seven months to show us how Danny ended up with a gun pointed at him on a tropical beach.

Danny and his partner Terry (Stephen Cloud) are a pair of aggressive LAPD detectives under the command of Sgt. Bachman (Eric Roberts). Danny — who isn’t opposed to skimming some drugs from one of their busts — is embedded with L.A.-based gangster Cole Lambert (Michael Madsen). Cole — who is unaware there’s an undercover cop in his crew — sends Danny and hot-headed colleague Mark (Ben Maccabee) on a business trip to Las Vegas, where they each run afoul of local drug kingpin Gino de Porto (Robert Miano). Mark’s irresponsible behavior gets him in hot water with Gino on the business side of things, while Danny forms a connection with Gino’s girlfriend Angela (Ali Costello). Now Danny has to make desperate moves to stay ahead of *two* drug lords…and keep himself alive.

“Everyone is setting everyone up, in case you didn’t know it.”

If that were the extent of the film’s plot, writer/director Daniel J. Gillin might have a tight little thriller on his hands. Unfortunately, the filmmaker crams in a bunch of additional plot lines that either don’t go anywhere or distract from what should be the main focus of the story.

For example, Angela is caught between Danny and Gino, but she also has a temperamental Cuban ex-husband named Jake (Alek Carrera) who is trying to become a power player. Meanwhile, Danny’s partner Terry starts running a separate operation where he attempts to infiltrate the Russian mob, led by wild card crime boss Alexi (Andrzej Chyra ). Apparently, someone decided Terry didn’t have quite enough to do because he also has a Russian mail order bride *and* a girlfriend on the side. Oh, and I almost forgot: Sgt. Bachman has a cop daughter who is also working undercover within the Russian mob. (Feels like the department might be overloading their resources on this one target.)

It would obviously take a minor miracle for any director to mold all these storylines into a cohesive, satisfying 98-minute film. While I admire the effort to tell a sprawling story, Gillin — in his feature film debut — simply isn’t up to the task.

Beyond the Trophy is overflowing with cliches: at various points, characters actually say things like “you’re in over you head”, “let’s run into the sunset”, and “you’re gonna be sleeping with the fishes” out loud. (Somebody is also made an offer that they can’t refuse.) The film is also burdened with clumsy staging during the infrequent action sequences and bouts of violence. I realize this is a very low-budget project, but it seems like the production couldn’t even afford squibs or any sort of practical visual effects. So when someone was shot, all we got was a loud bang followed by the victim playing dead until the next cut revealed sloppily-applied fake blood. On the bright side, Gillin displayed more ingenuity and energy whenever he had to film any of the movie’s strip club scenes.

Madsen and Roberts have plenty of experience in micro-budget projects like this one, and the two pros do their very best to liven things up. Roberts has less than a handful of scenes, so he doesn’t have much of a chance to make an impact. Meanwhile, Madsen’s Cole actually provides cheeky voiceover narration for the entire film. Other than the fact that it makes no sense for Cole to narrate the story — why would that character know or care about what’s going on in Terry’s life, for example — the jokey tone of the narration undercut whatever serious dramatic punch Gillin was trying to deliver. The other semi-known name here is Tommy “Tiny” Lister (Friday, The Fifth Element) who appears for exactly one scene, says about three lines and inexplicably vanishes.

The rest of the cast is mostly made up of amateurs trying (unsuccessfully) to act like tough guys or scantily-clad women in various states of near undress. (See? This movie isn’t all bad!) I’m thinking this jam-packed collection of cops and Italian/Russian/Cuban crooks would have a better chance of distinguishing themselves in a TV series rather than being crammed into a relatively short movie. As it stands, Beyond the Trophy isn’t much of a winner at all.

JLA Adventures: Trapped in Time Journey to the West (Blu-ray)