Posted in: Disc Reviews by Gino Sassani on June 4th, 2014 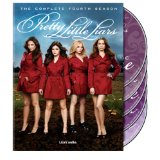 “Senior year is supposed to be the best year of your life. Did you know that? Yeah, if you survive it.”

It’s a new season, and the girls face new dangers. You have to give the writers some credit here. While the whole A thing can get a little old, they do a good job of changing the dynamics between the Liars’ relationships both inside and outside their group. Foes can become friends, and friends often turn out to be foes. There is a lot more turmoil inside of the group as each of the Liars takes a turn being a bit of an outsider for a short while.

The lying and fear are also taking their toll on all of them. For Spencer it is a bout with drug addiction. It’s not only a new personal demon, but it hurts her credibility even when she’s correct. Hannah is certainly eating a lot again and in danger of becoming the self she hated during Allison’s reign in the group. Aria is beginning to have serious emotional breakdowns as her own lies and stress mount, particularly over a certain English teacher who might just be a part of the A-Team. He at least has a hidden agenda we discover for the first time, and those revelations will push Aria to the edge. For Emily it’s an injury that costs her the ability to swim. It’s a loss that will take a huge toll on her and her relationship with Paige. All of the Liars are damaged this season, and those damages are starting to show big-time.

On top of these stresses the State Police have sent in bigger guns when Detective Wildon (Johnson) is killed, and Hannah’s mom is the prime suspect. The case is run by Detective Holbrook (Faris) and Tanner (Maffia). They know the Liars are up to something, and they’re determined to get to the bottom of it all.

Two of the boyfriends team up for several episodes to investigate some of the clues. Both Toby (Allen) and Caleb (Blackburn) get more screen time and far more to do. The show also sees more of Andrea Parker as Allison’s mom. She’s moved back into the house and becomes a central character, possibly even A. I’ve always liked Parker. Her role on The Pretender was awesome, and it’s good to see she can still pull off the cold, stoic bad-girl act.

The biggest revelation of the show, and I guess it should be considered a minor spoiler. It’s not a surprise to anyone following even the ads for the show on television. Allison is alive and hiding from A. Of course, that doesn’t end any of the mystery. Now the question is who is it who’s lying in her crypt?

You have to give credit to the showrunners for trying some cool things this season. I’m not sure that the target audience will appreciate the film noir episode filmed in black & white. It was the highlight for me and lifted the show’s creative team a little higher in my estimation. It’s all part of a Spencer drug-induced dream, but it fits into the film’s mythology and even unveils some clues. The idea is that these are things Spencer had already figured out in her subconscious. The style and film elements are a nice homage to a lost art of storytelling in cinema.

There’s the usual Halloween episode with the altered credits. This time it’s a founder’s day celebration in, of all places, a cemetery. It’s a town straight out of Children Of The Damned and puts the girls in a search through creaky houses and catacombs beneath the graveyard. It all leads to a new lair and another piece of the unsolvable puzzle.

The final episode is called “A For Answers”, but don’t expect it all to be tied up. It begs more questions than answers as the Liars finally get to hear Allison’s story. It ends with a mild cliffhanger and no revelation of who A might be.

Each episode is presented in its original broadcast aspect ratio of 1.78:1. The image is pretty solid. Colors are quite bright. These are high school girls, and they’re going to have a colorful wardrobe. The picture is quite natural-looking, for the most part. There are five episodes on most discs, so compression is going to be an issue, particularly for black levels.

The Dolby Digital 5.1 track does everything you would expect. There are a lot of ballad montages here, and the reproduction on the music is both dynamic and crisp. Dialog always comes through. You won’t find a very aggressive surround use here, but I think that’s to be expected.

Unhooding Red Coat – Allison Is Alive: (7:52) Cast and crew talk about the change in the show’s dynamic with Allison turning up alive.

Pretty Little Scenes: (8:22) If you hate hearing how every episode is like a mini-movie, don’t watch this one. They’ll be a lot of sore arms from folks patting themselves on the back. The focus shifts to a few special events: the hoedown dance, Halloween episode and film noir episode.

Confessions Of “A” Lair: (7:19) A closer look at the details of the show’s various discovered lairs.

Again, I have to say I’m not the target audience here, and I know it. Still, as much as I complain about watching the show, I can see how it attracts the teen-girl crowd completely. With good production values and storytelling, the show will continue to be an adolescent powerhouse. If you are looking for resolution in this season, it’s not to be found. What kind of fun would that be? “With answers there’s always more questions.”

Gino Sassani is a member of the Southeastern Film Critic's Association (SEFCA). He is a film and television critic based in Tampa, Florida. He's also the Senior Editor here at Upcomingdiscs. Gino started reviewing films in the early 1990's as a segment of his local television show Focus. He's an award-winning recording artist for Omega Records. Gino is currently working on his 8th album Merchants & Mercenaries. Gino took over Upcomingdiscs Dec 1, 2008. He works out of a home theater he calls The Reel World. Favorite films: The Godfather, The Godfather Part II, The Body Snatcher (Val Lewton film with Karloff and Lugosi, not the pod people film), Unforgiven, Gladiator, The Lion King, Jaws, Son Of Frankenstein, The Good, The Bad And The Ugly, and Monsters, Inc.
In the Blood (Blu-ray) Crocodile Dundee / Crocodile Dundee II (Blu-ray)