In the Blood (Blu-ray)

Posted in: Disc Reviews by Brent Lorentson on June 4th, 2014 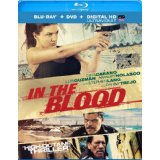 Following in the footsteps of Taken Gina Carano (Haywire) goes on a revenge rampage in order to discover what has happened to her injured and missing husband in a foreign land.  It’s not the most original jumping off point for a revenge film, but as is the case with most revenge films, the motivation is usually always the same, but it’s the journey to the fulfillment of their blood-lust that keeps us in our seats.  Coming off of the latest installment in the Fast and the Furious series, Carano has started to make a name for herself ever since she emerged in Steven Soderbergh’s action/thriller Haywire.  Many women have tried to step in the role of leading lady and bad-ass fighter, but Gina Carano seems to be the woman who seems right at home in the role of breaking bones and smashing faces, and it doesn’t hurt that she looks good while doing it.

On an island in the Carribean, Ava (Carano) and her new husband Derek (Cam Gigandet) celebrate their honeymoon together.  The beautiful beach locations are offset by the ghettos that house the islanders who call this vacation spot home.  And it would seem as though Manny (Ismael Cruz Cordova), is nothing more than a hospitable islander showing the newlyweds a good time, that is until he takes them on a breathtaking zip line tour.  Unfortunately an accident occurs, causing Derek to be taken immediately to the hospital (all I could think about was the opening sequence of Cliffhanger here), and it is on the way to the ER as Ava tries to follow behind but eventually loses the ambulance in traffic.  Not only does Ava have to suffer through the possibility of her husband dying, but when she finally arrives to the hospital, she is told her husband never was brought in.

After a fruitless search across the island and going to all the hospitals with no explanation for her husband’s whereabouts, Ava goes to the police to file a missing persons report.  Ava gets in touch with Derek’s family; his father (played by Treat Williams) believes Ava isn’t telling the whole story and could possibly have done something to Derek for his money.  The relationship between Ava and Derek’s father seems to have always been strained, because Derek met Ava at an AA meeting, and the father seems to expect that at any moment Ava will pull Derek off the wagon.  For as much of an issue the film wants to make about the alcohol abuse of the past, it really does nothing for the plot and simply just says to the audience that Ava and Derek are far from perfect, but this is something the film makes all too clear with Ava’s flashbacks.

And about those flashbacks…Ava basically had the dad no guy ever wants to have greeting him when picking up a girlfriend before a date.  Her father, Casey, played by Stephen Lang, has groomed his little girl into becoming a mean, lean fighting machine, and we see this through various flashbacks where he is training her on how to survive in the most extreme situations.  These combat skills come in handy as Ava gets sick of getting no answers from the police, and she decides to investigate Derek’s disappearance for herself.

Carano’s MMA fighting experience makes all the difference in the world when getting to watch her fight sequences.  Like any fight sequence it is of course choreographed, but the fact that Carano actually knows how to exchange blows in real life just shows throughout the film.  It’s not just a glorified dance routine; some of these fights are simply just raw and intense, which helps reflect the rage Ava seems to have carried inside throughout her life.  It’s this violent streak we see inside her that has me wishing we got to see what occurred to tame this beast and have her actually appear like a proper woman in a dress.  It’s one of those keys to her story I felt was missing and should have been explored more so in the flashbacks so we can actually see this character come full circle.

With a solid supporting cast which also includes Luis Guzman and Danny Trejo, the performances are actually pretty good throughout the film.  The only problem I have with the film is with the ever-present low-budget look of the film.  Low budgets don’t bother me too often, but some of the night shots in the film just look like something shot on an i-phone. Thankfully this is simply a B-film action flick that remembers to be fun and has a few cool fight scenes, but if you were looking for more, well, I suppose you’d better keep looking.

In the Blood is presented in an aspect ratio of 1.85:1.  The 1080p image is arrived at with an MPEG-4 codec at an average of 22 mbps.  As I mentioned above, the film’s biggest drawback is the fact that every night shot has a very low-budget look to it.  The scene that this becomes especially distracting is when Ava and Derek go to a club together early on in the film.  As for the daytime exteriors, we get a lush color palette with warm tones that capture the beauty of the Caribbean.  The image is relatively sharp and crisp throughout the film with nice flesh tones.  I think another good testament to the clarity you get with HD is when you see Danny Trejo; the man just has a face that pops in HD, and he looks great here.

The DTS Master Audio 5.1 track is what you would expect with this kind of action film.  The track excels in the numerous fight sequences, allowing for plenty of bass.  Whether it’s the characters going down the zip line or Ava on a motorcycle whipping through traffic, we get nice Foley work done here.  For the Spanish-speaking parts of the film we get some subtitles and other times nothing at all, possibly to help us feel as lost as Ava is in portions of the film.  The other times the dialog is clear even in the club scenes where the music is a bit overbearing.

In the Blood: Behind the Scenes: (19:20) Filled with interviews with the cast and the film’s director, we get plenty of insight about how the film came together with plenty of footage of the film being made.

In the Blood is a film that embraces its B-movie status and is a fun film to watch.  Sure, it’s got its faults, but this is just a brainless flick to have some fun watching with friends while throwing back beers and scrolling through Netflix late at night.

Brent Lorentson is a horror writer and film critic based out of Tampa, Florida. With a BA in Digital Film, he co-wrote and co-directed Scavenger Hunt. His short stories have appeared in various horror anthologies. In 2019 his short script Fertile Blood will be a part of the anthology horror film Slumber Party. He is currently working on his first novel A Dark and Secret Place set to be released in late 2019. Favorite Films: Taxi Driver, Fight Club, I Saw the Devil, The Wild Bunch, Dawn of the Dead, A Clockwork Orange, Pulp Fiction, Heathers, The Monster Squad, and High Fidelity.
Workaholics: Season 4 (Blu-ray) Pretty Little Liars: Season 4