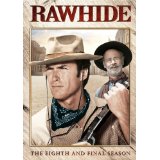 Long before Clint Eastwood was making our day as Dirty Harry or even roaming the badlands without a name for Sergio Leone, he was working the cattle drive on Rawhide. Rawhide was created to take advantage of the huge Western film and television wave that Hollywood had been riding for nearly a decade. With huge ratings for Gunsmoke and Bonanza among others, Rawhide was a bit of an unlikely success. Here the show explored the West on an endless cattle drive to get a few thousand steer to market. Along the way the crew would find themselves involved in someone else’s troubles or meet trouble head on themselves. The cattle drive theme would rely on the changing landscape to distinguish the show from other more sedentary westerns. More like Wagon Train, the constant movement always gave a sense of action even when there wasn’t much. Of course, there was a large number of changing support players along on the drive. Every operation needs cooks, ropers, and red-shirts.

A very young Clint Eastwood played Rowdy Yates. Unlike any cowboy you ever saw, Rowdy had slicked-up hair and looked more like a biker than a cowhand. He was the greenhorn in the bunch, usually finding each experience a learning opportunity. He had an almost naïve charm that made him popular. The original cast featured Eric Fleming as Gil, the trail boss. The third main character was Pete Nolan, played by Sheb Wooley. Sheb formed a good relationship with Eastwood that would be rewarded years later when Eastwood created a role for him in The Outlaw Josey Wales. I didn’t really watch the show even in its limited syndication run, so knew most of it by reputation only. Of course, I knew the Frankie Laine theme that has been used for everything from selling cars to western spoofs. The tune was also a moderate radio and record hit in the day.

Now Rowdy is the trail boss of the outfit and leads the final 13 episodes of Rawhide’s 8th and final season. There were certainly some outstanding episodes during this last roundup. The season starts with Encounter At Boot Hill. With a name like that in a Western, you know there’s gonna be some dyin’. Rowdy tries to get a suspect to a fair trial when the local sheriff won’t help and the local mob is used to lynching their problems. One man is killed and the other injured when Rowdy tries to get him medical help and that fair trial. He’s literally putting his own neck on the line… a rope line that is. In Six Weeks To Bent Fork, Rowdy has a chance to get $6,000 if he can get 1500 head of cattle to Bent Fork in, you guessed it, six weeks. He isn’t helped by some broken ribs and a crooked lawman who wants to quarantine the cattle for two months. When two of Rowdy’s men get caught in a cave-in, there’s someone willing to blast them out if they can transport the unstable explosive over a rocky terrain. It’s called Walk Into Terror and you know Rowdy’s willing to risk his life for his men. Horse thieves hold Rowdy hostage in Hostage For Hanging. They want $3,000 by sundown or they’re going to string up Rowdy.  The Pursuit has a famous lawman gunning for one of Rowdy’s men who was actually cleared of all charges. But the poster says wanted dead or alive, and that’s what he’s fixin’ to do. The series ends with Crossing At White Feather. Rowdy hires a drunk good-for-nothing to get the herd across a perilous river out of sympathy. It could come back to haunt him. It seems no good deed goes unpunished.

December 7th, 1965 was a rap for Eastwood’s Rawhide. It was only the beginning for the acting legend. He would go on to his famous Man With No Name Spaghetti Westerns and decades of iconic roles both in and out of the saddle. Today he’s a respected actor, director and producer. Relive one more time when television featured the young future star on the trail: “Move ’em on, head ’em up .. Rawhide.“

Gino Sassani is a member of the Southeastern Film Critic's Association (SEFCA). He is a film and television critic based in Tampa, Florida. He's also the Senior Editor here at Upcomingdiscs. Gino started reviewing films in the early 1990's as a segment of his local television show Focus. He's an award-winning recording artist for Omega Records. Gino is currently working on his 8th album Merchants & Mercenaries. Gino took over Upcomingdiscs Dec 1, 2008. He works out of a home theater he calls The Reel World. Favorite films: The Godfather, The Godfather Part II, The Body Snatcher (Val Lewton film with Karloff and Lugosi, not the pod people film), Unforgiven, Gladiator, The Lion King, Jaws, Son Of Frankenstein, The Good, The Bad And The Ugly, and Monsters, Inc.
True Blood: The Complete Sixth Season (Blu-ray) Workaholics: Season 4 (Blu-ray)