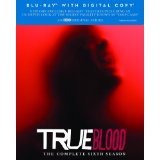 As someone who’s seen every single episode of True Blood, I suppose nothing should surprise me by now. HBO’s vampire drama has given us more than its share of head-turning sex scenes and a hearty helping of over-the-top violence. However, the further the series ventured from Bon Temps and its core group of characters, the more it seemed to lose its way, even as a satisfying guilty pleasure. This penultimate season still relied on an overly-crowded cast of supernaturals. But it was ultimately an encouraging sign that the show might get back to basics as it prepares to end its run this summer.

Season 6 picks up exactly where the last batch of episodes left off: Bill (Stephen Moyer) has just ingested the blood of Lilith (Jessica Clark), the original vampire. Lilith’s blood appears to destroy Bill, but he is quickly reborn as an all-powerful/all-knowing creature. (The Internet immediately dubbed him “Billith.”) Bill’s ex Sookie (Anna Paquin) and his frenemy Eric (Alexander Skargard) barely escape Billith’s assault with their lives.

Unfortunately, they have plenty of other things to worry about. The destruction of Tru Blood factories across the world — which manufacture the synthetic drink that keeps vampires from feeding on people — has led to more vampire-on-human violence. As a result, Louisiana Governor Truman Burrell (Arliss Howard) enacts a series of drastic measures to fight back. The most severe is a sadistic “Vamp Camp” where vampires are poked and prodded in a variety of cruel ways. The season finds a good chunk of its narrative momentum thanks a vision/flashforward in Ep. 2/“The Sun”; Bill sees his friends and loved ones — including Eric, Jessica (Deborah Ann Woll), Tara (Rutina Wesley), and Pam (Kristin Bauer van Straten) — meeting the sun at Vamp Camp. Bill, who believes himself to be a god thanks to Lilith’s life-giving blood, decides he’ll do anything to save his fellow vampires.

Meanwhile, Sookie and her brother Jason (Ryan Kwanten) attempt to distance themselves from vampires and set out to unlock the mystery of their parents’ death. That proves to be a difficult task on both fronts since their parents’ killer — a deadly, ancient vampire named Warlow — is on the hunt for Sookie. She enlists the help of long-lost relative and a handsome stranger named Ben (Rob Kazinski) who shares a common trait.

In recent seasons, True Blood plotlines have separated and isolated characters to diminishing returns. (Who decided it was a good idea to have Bill and Eric spend most of season 5 attending Vampire Authority council meetings?) I also felt like the show overdosed on supernaturals a while ago. (Werepanthers, witches, and faeries, oh my!)

There was little reason to believe season 6 would be the one to steer things back in the right direction. This was the first year without creator Alan Ball — who departed to focus on Banshee — and it took two showrunners to get through the show’s sixth season. On top of that, Paquin’s real-life pregnancy contributed to an abbreviated 10-episode order (as opposed to the show’s customary 12 episodes).

Fortunately, True Blood seemed to make the most out of both situations. As I mentioned before, I wasn’t exactly loving Ball’s most recent work on the show, so an infusion of fresh blood was badly needed. And while the show already moves at a pretty brisk pace, the shorter order meant there was even less time for filler and meandering. (Although the show still found time for a truly unfortunate Lilith/Warlow flashback set in prehistoric times, as well as some tiresome scenes set in a faery cemetery.) Vamp Camp was also a smart way to simultaneously bring a bunch of characters together in one place while re-establishing the series’ recurring “vampires as persecuted outsiders” motif.

The fact that this season was shorter than usual made its best episode — Ep. 9/ “Life Matters” — even more of a pleasant surprise. In very un-True Blood fashion, the show pumped the brakes long enough to pay moving tribute to the death of a relatively minor character. It accomplished this by celebrating and honoring the character’s life. The show’s less outlandish (like Sam Trammell’s supportive shapeshifter Sam Merlotte) and more relatable characters (like Chris Bauer’s overwhelmed single dad Andy Bellefleur) also provide a welcome reprieve from the head-ripping insanity. (Although Joe Manganiello’s good-guy werewolf Alcide was unnaturally cranky most of the season; maybe it was the terrible wig the actor had to wear.)

Of course, this is still True Blood, so many of the season’s standout moments involved blood and various body parts. There’s a gruesome, funny woman-on-woman fight at the Vamp Camp in Ep. 8/“Dead Meat.” Oh, and did I mention the touching memorial service in “Life Matters” was preceded by Eric getting revenge for the death of a loved one in a way that’ll make every male viewer reflexively protect their, um, manhood.

The talented cast is so deep, it doesn’t really matter that Paquin isn’t a very strong anchor for the show. (Though the actress has some good moments toward the end of the season as Sookie attempts to take control of her destiny.) Scene-stealers like Kwanten’s dim bulb Jason (“You don’t have that stockholder’s syndrome, do you?”) and Bauer van Straten’s snarky Pam (“Hold the f— up…am I in therapy?!”) get in their share of funny one-liners. Skarsgard, however, gets the majority of standout scenes, whether they’re romantic (when Eric decides to make a new vampire) or casually outlandish (just hanging out reading a book). Some of the new(ish) faces this season included Rutger Hauer in a delightfully intense and eccentric role, and the return of Anna Camp’s prissy, pious Sarah Newlin. On paper, the latter character is a tired cliché of misguided religious fanaticism, but Camp plays her with a manic aplomb that makes her an entertaining, hiss-worthy villain.

The season finale/“Radioactive” — as is customary with True Blood — wraps up the current season’s main storyline in its first half while hinting at things to come with its latter half. (There’s also the apparent death of a fan favorite, though I don’t think anyone believes that person is actually gone.) Without giving anything away, I’ll say I was encouraged to see humans and vampires standing side by side in a familiar location. After all, “everybody needs help.”

True Blood: The Complete Sixth Season is presented in its original aspect ratio of 1.78:1. The 1080p image is arrived at with an AVC MPEG-4 codec at an average of 27 mbps. It shouldn’t come as a surprise that the two dominant colors in the show’s visual palette are black and red. Both are crisply and expertly presented here. Despite the fact that vampires do more daywalking than ever this season, the show is driven by its nocturnal characters. The disc responds in kind with deep, inky black levels that provide excellent separation. Meanwhile, the various shades of red — including, of course, the blood, but also Arlene’s (Carrie Preston) hair — come through boldly and vibrantly.

The disc also does a nice job showcasing the various skin tones of its characters, whether its the warm flesh of the sun-kissed Louisiana living or the pale complexion of its vampires. Overall, there’s an appropriately gritty texture to the image. Close-ups are impeccable throughout, but some medium shots look underwhelming by comparison. It seems to vary from episode to episode. (Or even from scene to scene.) However, that’s a minor quibble in what is a strong, versatile presentation.

The DTS-HD Master Audio 5.1 track is a master class in bringing a fictional world to life. The perfectly-balanced track provides plentiful and dynamic surround activity that never overwhelms the viewer. Instead, it neatly settles us into the world where these characters reside. (Whether it’s ambient nature noises outdoors or the raucous sound of a busy night at Merlotte’s Bar & Grill.) The track makes an aggressive first impression as Billith’s attack spurs the subs into action. There’s also nice directionality as vampires fly or speed-run off the screen, and the sound travels from one speaker to the next. Dialogue is particularly clear and pristine in this outstanding track that gets off to a marvelous start and never lets up.

All of the bonus material is presented in HD. Each episode comes with a corresponding “Inside the Episode” featurette. The “Vamp Camp Files” and “True Blood Lines” bonus material can be accessed on Disc 4.

Audio Commentaries: There are commentary tracks for episodes 4 (“At Last”), 6 (“Don’t You Feel Me”), 7 (“In the Evening”), 9 (“Life Matters”), and 10 (“Radioactive.”) The five commentaries tend to include a writer and/or director with some cast members jumping into the fray. Most notably, there’s Preston for “Life Matters”, and Moyer for “In the Evening.” Moyer is so charming throughout the bonus material, it makes me wish we got to see a lighter side of Bill.

Inside the Episodes: (36:56) A featurette that accompanies each episode. They include comments from the respective writer, director and/or producer. There’s actually some solid info to be found here, including the fact that the funeral in “Life Matters” was extremely personal to writer/producer Brian Buckner. We also learn the emotional prayer Jessica recites in “The Sun” was a late addition. Features a Play All option on each disc.

Vamp Camp Files: (32:28) An interactive mix of videos — featuring in-character appearances from Anna Camp’s Sarah Newlin, Pruitt Taylor Vince’s therapist , among others — and information related to the fictional Vamp Camp. Categories include “Vampire Solution”, “Vampire Physiology, “ Vampire Psychology”, and “Vampire Defense.” The amount of work put into this is admirable, even if most people probably won’t ever come close to reading everything that’s in here.

True Blood Lines: An interactive family tree dedicated to this season’s characters that shows you how they are related to one another and what kind of creature they are. There is also an archive that includes every significant character from the show’s entire run.

The final season of True Blood premieres June 22. The show doesn’t have nearly the same amount of buzz it once did , but it still makes for a thoroughly entertaining, hot-blooded summer viewing option.

More importantly, the sixth season — now available in this spiffy four-disc set — refocused the show and (hopefully) put it on a course toward a satisfying conclusion. Who knows what the series finale has in store? Especially since “death is not the end anymore.”