Posted in: Disc Reviews by Brent Lorentson on June 4th, 2014 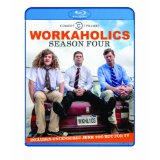 Before getting this season to review, my exposure to the show was fairly limited; I had seen a few episodes on Comedy Central, but that was about it.  Now that I’ve had a chance to kick back and take in the shenanigans of Blake (Blake Anderson), Adam (Adam DeVine) and Anders (Anders Holm) I can say it was a disservice to myself to hold out for so long.  For those that are unaware of the show, I see it as a bit of a hybrid between It’s Always Sunny in Philadelphia and Office Space, as it follows three friends who live together and work together at a telemarketing company. Thankfully this is a show that doesn’t require seeing the previous seasons and can be picked up and watched at any point.

Picking a favorite episode is an easy one for me; not that the other episodes are not funny, but “Beer Heist” is a solid standalone episode that brings a smile to my face just thinking about it.  The guys run into a group of sorority girls who are on a beer run. The guys concoct a plan to impress them, and it involves hopping in the back of a semi-truck to steal beer.  Their plan quickly unravels as the truck takes off with Blake and Adam still in the truck.  As their troubles escalate, the rationale a character uses to explain why his friend doesn’t understand their actions because he’s simply not horny enough is just the right kind of explanation for this show.

To say that the show is pot-friendly would be a bit of an understatement.  But to be fair, the show does more than just embrace the notion of pot but instead endorses the idea of simply having a good time with your friends, especially when these friends are closer than family.  This is expressed best in “Three and a Half Men” when the guys decide on filming a documentary of their dear friend and dealer Karl (Kyle Newacheck) as he goes in for a procedure to have his penis removed and then have it surgically attached to Blake.  Of course the jokes are raunchy as you would expect, but the episode does have a few moments where the guys let their hearts show, granted at the cost of their friend possibly going under the knife.

The core trio of Blake, Adam and Anders is what make this show work.  If one of these guys were to ever leave for some reason, I couldn’t imagine this show going on.  The chemistry these three have together is something that is easy to see and appreciate.  What’s most surprising, though, is that I didn’t feel there was a single dud on this release, and that the consistency of the show is actually a little impressive.  Considering the show just finished its fourth season, it’s at a point where I’m curious to see where they go from here. The potential for this to become a major tent pole series for Comedy Central is a real possibility.

Workaholics Season 4 is presented in an aspect ratio of 1.78:1.  The 1080p image is arrived at with an MPEG-4 codec at an average of 32 mbps.  This is a very sharp-looking transfer where the detail simply just pops.  Whether it’s the rich texture of the couch, the interior of their car, or in their cubicles at the office, the detail is all there and with great clarity.  The color palette is very natural, and the colors look nice throughout.  I’m a little surprised, to be honest, but considering there are only six to seven episodes per 50-gig Blu-ray disc there is plenty of information these discs can store, and with no room spent on extras we get a great looking transfer.

The Dolby True HD 5.1 is just fine for what it is.  What matters most is the clarity of the dialog so you can hear all the clever raunchy jokes, and the dialog is clear throughout.  There are occasional moments of added ambience throughout, usually in the exterior scenes on the streets, but nothing too dynamic here.  For a comedy series, the track is good for what it is but nothing worth cranking the speakers up for.

Outtakes: (10:56) The standard reel of cast members flubbing their lines and simply having fun on set.

Deleted and Alternate Scenes: (10:36) Really none of the scenes here are too memorable and were most like excised for time constraints. No hidden gems here.

Season 4 of Workaholics was a fun watch and something I can see myself revisiting at some point.  I’m now onboard as a fan, and it’s not too often a comedy can do that.  For those who are fans of the show, of course you’re going to enjoy this unedited release.

Brent Lorentson is a horror writer and film critic based out of Tampa, Florida. With a BA in Digital Film, he co-wrote and co-directed Scavenger Hunt. His short stories have appeared in various horror anthologies. In 2019 his short script Fertile Blood will be a part of the anthology horror film Slumber Party. He is currently working on his first novel A Dark and Secret Place set to be released in late 2019. Favorite Films: Taxi Driver, Fight Club, I Saw the Devil, The Wild Bunch, Dawn of the Dead, A Clockwork Orange, Pulp Fiction, Heathers, The Monster Squad, and High Fidelity.
Rawhide: Eighth & Final Season In the Blood (Blu-ray)