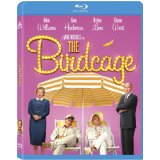 Did you know The Birdcage is the all-time, highest-grossing movie in the U.S. that features a gay lead character? It’s true! Given the drastically increased pop culture visibility of the LGBT community in the 18 years since its release, it’s a bit of a surprise the film still holds that distinction. On the other hand, I’m not too shocked because I’ve been laughing at this funny farce since it first came out in 1996. So I was delighted to see it finally make its long-overdue Blu-ray debut.

We’ll get to the Blu-ray particulars in a bit, but I really do want to spend a fair amount of time talking about this deeply silly, deeply fascinating project. For starters, how about the fact that Robin Williams’ first “straight man” role in a comedy didn’t come until he was cast as a gay nightclub owner?

Williams stars as Armand Goldman, who owns The Birdcage drag club in South Beach. His partner is the flamboyant Albert (Nathan Lane), who is also the main attraction at The Birdcage. Val (Dan Futterman), Armand’s college-age son from a one-night-stand with a woman, arrives in Florida and announces he’s marrying a girl from school named Barbara (Calista Flockhart). Barbara’s father is Kevin Keeley (Gene Hackman), an ultraconservative senator who co-founded something called the “Coalition for Moral Order.” Fearing the worst, Barbara lies to her parents and tells them Armand is a “cultural attaché” with a homemaker housewife.

Sen. Keeley’s world is rocked after his coalition co-founder dies under hilariously scandalous circumstances. Keely’s wife Louise (Dianne Wiest) has the idea that a happy occasion like Barbara’s wedding might deflect a lot of the negative press. So the Keeley’s head down to South Beach to meet Val’s parents, while Armand scrambles to play it straight and fool his uptight future in-laws. (The movie picked up one Oscar nomination, and it was for Art Direction/Set Decoration; kudos to Bo Welch and Cheryl Carasik for every hilariously inappropriate piece of art in Armand and Albert’s apartment that has to be jettisoned.)

The Birdcage is an adaptation of the 1973 French play — and subsequent 1978 French/Italian film — La Cage aux Folles. The American version boasted an unbelievable pedigree that I couldn’t fully appreciate because I was 14 years old the first time I saw it. Mike Nichols (The Graduate) directed a script by Elaine May, his former comedy partner from the ‘50s and ‘60s. (This was the first time the duo worked together on a feature film.) The Birdcage was also shot by cinematographer Emmanuel Lubezki, who just won his first Oscar for Gravity. (Which helps explain why this movie opens with a not-quite-continuous two-minute shot.

Then there’s Robin Williams, who was coming off blockbusters like Aladdin and Mrs. Doubtfire and was one of the most bankable stars in Hollywood. So it was kind of a big deal when he signed on to play a gay man in a major studio project (even if it was a farce). Not surprisingly, Williams was originally cast in the cross-dressing Albert role — you can just imagine the “Mrs. Doubtfire-redux” dollar signs dancing in a studio’s heads — before requesting to play Armand. It turned out to be the right choice because he’s pretty great in this movie.

I know Williams had proven his acting chops prior to The Birdcage — having earned three Oscar nominations and winning one two years later for Good Will Hunting — but this was the first time I could remember him ceding the spotlight in a broad comedy. The only time Williams’ manic persona pops up is during the scene where Armand tries to direct a dim dancer; otherwise, he’s effectively subdued while remaining very funny. He also nails the heartfelt scene where Armand flatly tells Albert how much he’s committed to him. Of course, none of this would’ve mattered if the person Williams was ceding the spotlight to hadn’t delivered. Lane, in his first major live-action film role, is a riot as Albert. (And Williams and Lane are extremely funny together, especially during the sequence where Armand tries to teach Albert how to act like a man.) At that point, Lane was best known for his work on Broadway and voicing Timon in The Lion King, but he handily commands every frame he’s in. The performance is intentionally shrill, but Lane lets us see enough of Albert’s insecurity to remind us there’s a real person in there.

Of course, the film’s best sequence is the gloriously awkward and disastrous dinner party between the Keeleys and the Goldmans Colemans. (Barbara also neglected to mention her fiancés family was Jewish.) Between his early Young Frankenstein cameo and his wonderful performance in The Royal Tenanbaums, I’ve always thought Hackman was an underrated comedic performer. Here, he’s a clueless, flustered delight as he falls head over heels in love with “Mrs. Coleman.”(Plus, it’s just good to see Gene Hackman in *any* movie since he’s stopped making them…and the drag-tastic finale certainly gives you the actor like you’ve never seen him before.) Wiest is a perfect upper-crust match, but the actor who nearly steals the show is Hank Azaria as Agador Spartacus, Armand and Albert’s Guatemalan housekeeper. (He tried to run off with the movie, but Agador’s not used to wearing shoes, so he tripped and fell.)

Unfortunately, a pre-Ally McBeal Flockhart doesn’t have much to do. (Christine Baranski, as Val’s biological mom, does more with less screen time.) Flockhart still fares better than Futterman, who has the thankless job of acting like the film’s humorless foil. We expect Sen. Keeley to recoil at Armand and Albert’s lifestyle, so watching Val harshly and desperately push his parents to change who they are is still unpleasant to watch.

The film’s anthem is, naturally, the Sister Sledge smash “We Are Family.” I hadn’t seen The Birdcage from start to finish in at least five years, and I worried it might feel a little dated. Besides a few Bob Dole jokes and some mid-‘90s fashion choices that are truly unfortunate in hindsight, The Birdcage was ahead of its time as a mainstream representation of a non-traditional family. (Early on, Val notes he’s the only kid in his frat who doesn’t come from a broken home.) Yes, I realize one of the two gay men is a drama drag queen, but The Birdcage doesn’t purport to represent the gay community as a whole. It is very specifically about this set of (hilarious) characters.

The Birdcage is presented in an aspect ratio of 1.85:1. The 1080p image is arrived at with an AVC MPEG-4 codec at an average of 30 mbps. I actually had the DVD in my collection, so I was able to do little comparison with the new and (hopefully) improved HD presentation. Overall, the Blu-ray image is a decent upgrade; it’s a clearer image that doesn’t jump off the screen or ever come close to looking razor sharp. (Look elsewhere for fine detail.) The presentation is better in the sunlight, giving a warm, pleasing flesh tone to the proceedings. Colors are a bit duller than I would’ve liked given the potential for boldness. (Especially during any drag show in The Birdcage.) A lot of interior shots possess a slight griminess that isn’t entirely inappropriate.

The DTS-HD Master Audio 5.1 track fares a bit better. The frequent music/song cues feel rightly propulsive (especially inside The Birdcage), thanks to a good mixture of front and sub activity, as well as strategic action from the rears. Actually the surround speakers mostly get to sit this one out, since there is minimal-to-no activity during scenes on the crowded streets of South Beach. The good news is dialogue comes through extremely well, which is generally the most important thing in a comedy.

Remember how I mentioned that I previously owned this movie on DVD. Well, I’ve wanted to replace that bare bones disc for a while now, and Fox has finally obliged by giving us…a bare bones Blu-ray.

I’m happy to be able to see the film in HD, but this release is somewhat of a letdown. I can live with the less-than-dazzling A/V upgrades, but the continued lack of bonus material is a serious bummer. (You can’t tell me Williams and Lane didn’t go nuts improvising on the set; or how about a commentary from any of the heavy hitters on the crew.) Thankfully, the movie remains extremely funny, which is why I’ll still (half-heartedly) recommend you pick up this release. In other words, walk but don’t run.