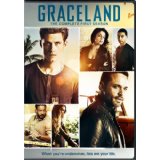 Mike Warren (Tveit) has just graduated at the top of his class for the FBI. His family includes past directors, and he’s personal friends with the current director (Vance). He expects to write his own ticket to a fast-track gig in DC and into a director’s chair at a young age. It all gets sidetracked when he’s assigned to Southern California and a place called Graceland. It’s a beach house seized in a drug bust. Now it’s an inter-department Federal unit. There are FBI, DEA and Customs officers all sharing the house and coordinating both their domestic lives and their law enforcement lives. The name comes from the previous owner who happened to be an Elvis fan.

The job is a little easier to take because the house leader and his training officer will be Paul Briggs (Sunjata). Mike knows his reputation. Briggs was him a few years earlier. The house residents also include Johnny Tuturro (Montana). He’s the immature kid in the group. He has a lot of heart, but he’s loud, impulsive and a showboat. Catherine “Charlie” DeMarco (Ferlito) is the house’s mother figure. She’s young like the rest, but she’s more nurturing than the others. She’s their makeup artist when an undercover calls for tats, wounds or track marks. She’s also the best cook in the bunch. Jakes (McLaren) is the only Customs agent in the house. He’s moody and likes to keep to himself. He labels his food and doesn’t share or play well with others. He has a son he pushed away with the mother in an attempt to keep them safe. Now he regrets the decision. Paige Arkin is the wildcard of the team. She can be flashy or quiet, whatever might be called for. She’s the best chameleon of the house. You’ll also find her bright eyes very distracting in the first couple of episodes. The show runners must have agreed, because an obvious effort is made quickly to dim them considerably.

It all looks like Big Brother meets cop show until Mike finds out why he was really sent there. The FBI thinks that Briggs might be dirty, and Mike’s really there to investigate Briggs. It leads to the obvious conflicts of loyalty, and the Briggs character is deliberately written so that his actions can usually be seen both as good (yet unorthodox) or dirty.

The show might have been better had it used a more formula style to tell many stories. Instead the season focuses on a couple of key characters that might be related and become part of a complicated undercover for rookie Mike. He ends up becoming the right-hand man to drug kingpin Bello (Akinnagbe). The guy’s stone-cold. He likes to pour molten lead into the eyes of anyone who he thinks betrays him. There’s no question he keeps the show interesting. Without him I don’t think you have a show. There’s the illusive Jangles, who is a drug cartel enforcer from Mexico. He’s part of Briggs’ issues, because they have a nasty past. He gets his name from the keys he takes from his victims and purposely jangles while he tortures them. He’s part urban myth to keep the troops in line and psychotic escapee from a Cohen Brothers flick. These characters are all somewhat interesting, but week by week, episode by episode, it doesn’t ever feel like we’re getting anywhere.

Mike ends up bearing witness to all manners of torture and murder. The problem is that it doesn’t really change the character the way it should. Yeah, we see him deal with the trauma for a few moments, and then he’s back to the old Mike. Can’t really say if it’s a flaw in the script or just a really lackluster performance by Aaron Tveit. For a guy who graduated top of his class, he sure appears stupid sometimes. And that’s one of my biggest complaints of the show. Mike and Briggs are front and center, and with Briggs there actually is a strong character and performance. Everyone else is just an underused puzzle piece that’s often jammed into the whole to make them fit. I can’t fault the cast. They do manage to eke out moments from time to time. It appears they all have skills. I don’t think the writers know how to use them. When stakes do get high for them, I found it harder to care about what happens to them and thus don’t really roll with the suspense as well as I should.

The show does push some boundaries with the action and violence, but the story development doesn’t really appear to keep up. The plots rely on some of the craziest examples of luck or coincidence to move forward. I’m willing to suspend my belief and understand no cop show is going to truly be realistic. At least in some shows they try. There’s little effort here to ground the stories in reality. After a while you really just stop caring. Scenes of the gang surfing or frolicking on the beach make this a pretty show about pretty people. I don’t know about you. But do you know anyone like that?

You get 12 episodes on three discs. There are some deleted scenes, a gag reel, and a short inside feature.

I’m sure the show has tons of fans, and it’s full of a lot of young adult eye candy. Surprisingly, many of the scenes are shot in Florida for California. Usually it’s the other way around. Credit goes for having a rather unique look to the show. There’s plenty of potential here, and the final episodes offered enough of a shakeup that there’s an opportunity to learn from the mistakes and give this show a bit more punch. The chance is there guys. “Don’t throw it away.”

Gino Sassani is a member of the Southeastern Film Critic's Association (SEFCA). He is a film and television critic based in Tampa, Florida. He's also the Senior Editor here at Upcomingdiscs. Gino started reviewing films in the early 1990's as a segment of his local television show Focus. He's an award-winning recording artist for Omega Records. Gino is currently working on his 8th album Merchants & Mercenaries. Gino took over Upcomingdiscs Dec 1, 2008. He works out of a home theater he calls The Reel World. Favorite films: The Godfather, The Godfather Part II, The Body Snatcher (Val Lewton film with Karloff and Lugosi, not the pod people film), Unforgiven, Gladiator, The Lion King, Jaws, Son Of Frankenstein, The Good, The Bad And The Ugly, and Monsters, Inc.
Perry Mason Movie Collection Volume 1 Devil’s Knot (Blu-ray)