Posted in: Disc Reviews by Brent Lorentson on June 9th, 2014 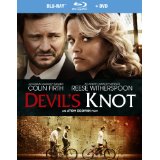 For most who have heard about the West Memphis Three, it is because of the HBO documentary Paradise Lost: The Child Murders at Robin Hood Hills.  It was a documentary that sparked the interest of many and fueled a movement to free Damien Echols, Jason Baldwin, and Jessie Misskelley for the murder of three young boys in 1993.  It was a documentary that attempted to expose the trial as a witch hunt in which the only things the boys were guilty of were listening to heavy metal, wearing black and participating in Wiccan practices.  Numerous documentaries later and with the support of Hollywood A-listers such as Johnny Depp and Peter Jackson and musicians like Metallica, Marilyn Manson, and Eddie Vedder, the West Memphis Three finally were freed from prison in 2011.  As for the answers to who is responsible for the murders, many will theorize, but it would seem only the child-killers would know what really happened that night.  As for Devil’s Knot, just what does this film present to us, the viewers?  Unfortunately it doesn’t seem to carry the same emotional punch as the documentaries, despite the impressive cast that it boasts.

Colin Firth plays Ron Lax, an investigator who comes into the case against the West Memphis Three and attempts to help the defense team as best he can, while Reese Witherspoon comes in playing the role of Pam Hobbs, a parent to one of the deceased children.  The film balances back and forth between the characters and how they are dealing with their grief and the investigation, yet despite the efforts of these two Oscar winners, both fail at getting the viewer to care at all about them.

The film starts up from the afternoon of the children’s murders, all the way to the conclusion of the trial in 1994.  A case that is packed with so much controversy and intrigue, not to mention how polarizing it was within the town, I’m completely awed by how with all the talent involved managed to make such a dull film.  Sure, Atom Egoyan is more recognizable for his art house films like Exotica and Chloe, but usually he’s more than capable of handling a film that works as a character study, but instead we have a film that results with flimsy one-dimensional characters.  And with Scott Derrickson (Sinister) handling a co-writing credit, I’m left wondering what the hell happened.  On paper everyone involved attached with the material, should have made this a no-brainer hit, but instead it comes off turns out nothing more than an OK episode of Law and Order: SVU.

The biggest mistake I find with the film is that not enough time is spent with the alleged killers to begin with; they are nothing more than a backdrop to whatever Ron Lax may be investigating or whatever interview Pam Hobbs is involved with.  There is a moment in the film when Pam goes up to the school with her son’s homework and asks the teacher to grade it for her.  This was one of the few touching and heartbreaking moments of the film, but there was simply not enough to keep this film afloat.

As for the films presentation of the police involved as well as the prosecution team, instead of giving us characters who are seeking justice or simply characters wanting to calm their town in a state of panic, we simply get a bunch of characters that seem to be nothing more than bigots or simply incompetent. But even with characters that are presented to be so one-sided, we are never presented with a perspective that ever feels balanced or fair.  I’ve seen many of the documentaries about the case as well as numerous interviews with those involved with the case, and even as a supporter of the West Memphis Three, I feel that most of what made this case so engrossing never made it to the screen.

I wanted to like this film, but this completely fell flat and just never seemed to grab me.  For a film that had all the ingredients to be a great courtroom/ procedural thriller, in the end we just get a dull mess.

Devil’s Knot is presented in an aspect ratio of 1.78:1.  The 1080p image is arrived at with an AVC MPEG-4 codec at an average of 20 mbps.  The film has a very natural look where it doesn’t seem like this has been saturated or messed up with too much color correction.  The flesh tones appear to be very natural as well.  The blacks have a slight amount of crushing but nothing too distracting.  Nothing about the color palette seemed to pop; the visuals seemed to fall as flat as the performances for me.

The DTS Master Audio 5.0 track is a bit unremarkable, but that is mostly due to the fact that this is a film that relies more on dialog than scenes of action.  The dialog is very clear, and though there is a healthy dose of ambients throughout the film, there is just nothing here that seems to utilize its audio potential.  The score is a noticeable presence but lacks much in the way of bass.

The release comes with both a Blu-ray as well as a DVD of the title.

The making of Devil’s Knot: (6:57) A brief interview with those involved with the production and what got them involved with working on the film.

Getting Into Character: The Cast of Devil’s Knot: (7:48) Interviews with members of the cast and what they did to get into playing the roles of those involved with the case.

Deleted Scenes: (5:43) Just a couple of scenes excised from the film.  The more interesting scene involves the documentary crew interviewing one of the parents.

Everything involved with this film should have produced something special and far more thrilling than the end result.  For those familiar with the case and the documentary, I’m sure curiosity will take hold, and you’ll find yourself checking this title out.  For those without any knowledge of the case, perhaps there is enough here to spark some interest in learning more.  But in the end the film seems to have settled with mediocrity at best.

Brent Lorentson is a horror writer and film critic based out of Tampa, Florida. With a BA in Digital Film, he co-wrote and co-directed Scavenger Hunt. His short stories have appeared in various horror anthologies. In 2019 his short script Fertile Blood will be a part of the anthology horror film Slumber Party. He is currently working on his first novel A Dark and Secret Place set to be released in late 2019. Favorite Films: Taxi Driver, Fight Club, I Saw the Devil, The Wild Bunch, Dawn of the Dead, A Clockwork Orange, Pulp Fiction, Heathers, The Monster Squad, and High Fidelity.
Graceland: Season 1 Resurrection: The Complete First Season