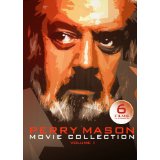 Perry Mason officially ended in May of 1966, but that wasn’t going to be the end. Twenty years later the surviving cast members reunited for Perry Mason Returns. It was Perry and Della back together again. Both Raymond Burr and Barbara Hale returned to their roles. William Hopper had died in 1970, so William Katt joined the reunion as Paul Drake, Jr. Katt might not have really been Drake’s son; he was Hale’s son. When Katt left the films he was replaced by William R. Moses as Ken Malansky. Ken was a young law student helped by Perry once when he was framed in law school for a rival’s murder. He ends up being both a legal assistant and investigator for Perry in the reunion films. The films also often starred James McEachin as Lt. Brock, the cop on many of the cases.  M*A*S*H’s David Ogden Stiers would often play his rival in the prosecutor’s office, Michael Reston. The team would continue to do 30 television movies from 1985-1995. CBS has now begun to package these reunion films in collections like this. You get six films on three discs.

This is the first of the reunion movies and the only episode or film not to bear a title that starts with The Case Of… It brings William Katt’s first performance as Paul Drake, Jr.

We find that Perry Mason is now on the bench and has been retired from private practice for eight years. In that time Della has been working for Arthur Gordon, played by Patrick O’Neal. He’s a tough guy, but fair, and they get along so well that Arthur just took his wife’s foundation out of her hands and put Della in charge. At his 60th birthday party, he pretty much announces that the party’s over for his greedy wife and adult children. They’re all being cut out of his substantial will. Of course, he ends up dead with plenty of people happy to see him go. It’s Della who is framed for the murder, and she turns to Perry for help. He resigns his judgeship and puts together a team to help her.

Guests include The Six Million Dollar Man’s Richard Anderson as the family attorney. Anderson actually played a cop in the final season of the original series.

Father O’Neal (Bottoms) has been hard at work on a new project assigned to him by the Archbishop himself. There appears to be some financial chicanery going on with the diocese hospital, and he’s trying to find out what that might be. It’s going to make a lot of enemies for this honest priest.

Enter Sister Margaret (Greene) who has a bit of a crush on the dashing priest. She doesn’t ever do anything about it, but soon there’s evidence of a torrid affair, and after that Fr. O’Neal ends up dead. Sister Margaret’s going to take the fall unless Perry and his team can get to the bottom of things.

If some of this sounds and looks familiar, it should. The same team of Silverman and Hargrove created The Father Dowling Mysteries, which had very similar plots. Tom Bosley is even on board in a small role as a priest here. Timothy Bottoms is the doomed father, and the nun is played by LA Law’s Michelle Greene. Hill Street‘s own Chief Daniels Jon Cypher plays a suspicious doctor at the hospital. The hospital establishing shots and interiors should also look familiar. The same team brought us Diagnosis Murder on many of these same sets. This is also the first film to feature both David Ogden Stiers as Weston and James McEachin as Lt. Brock.

Robert McKaye (Penny) is a huge Hollywood action star and director. He’s having romantic issues with his co-star and lover. When he finds her at an intimate dinner with late-night talk host Carr (Thicke), he gets into a brawl at the restaurant. When he calms down, he comes up with a stunt with his friend Carr. He uses a prop gun to show up “unexpected” during the live airing and shoot Carr. The trouble with the joke is that someone switched the blanks for real bullets, and McKaye has just killed a guy he fought with in front of 40 million witnesses. All the while Paul deals with a tabloid reporter who wants the big story. Michelle would show up later accused of killing her boss, but played by a different actress.

When McKaye told his stunt coordinator about the joke, he was wired with a hot microphone, so several people knew about the planned prank. That list of suspects includes Barney Miller’s Ron Glass.

One of the big continuity issues with the show pops up for the first time here. This episode takes place in New York, yet Weston is Perry’s opponent in the prosecution’s seat. You’ll find throughout these episodes that Weston is the DA in several states. Of course, there’s no way that could really happen. Is Weston stalking Perry?

Katt has one of his worst times as Drake in this episode. He keeps knocking things over when he tries to sneak up on people. If he were that clumsy, he wouldn’t be solving that many cases, I suspect. Still, it makes for comedy relief or extra-tense suspense.

Joe Penny would end up starring in another Silverman/Hargrove production. He would team up as Jake to William Conrad’s Fat Man.

When a US Senator dies unexpectantly, the Governor is about to select Laura Robertson (Simmons) to fill the seat. It’s a time of celebration with their closest family and friends. But husband Glen (Berry) gets a phone call from a mysterious voice that threatens to expose Laura’s mental illness treatment from years ago if he doesn’t pay $50,000. Glen decides to pay but is framed for murder when the blackmailer turns up dead. Laura was once a lover of Perry’s, and she reaches out to him to help her husband. Perry agrees, but Glen can’t get beyond his jealousy of their past relationship to focus on the case. Drake is constantly sabotaged by a guy who uses a lot of different names.

With politics there come many good suspects, and this one has no shortage. The list of guest stars is also of a better quality than the previous films to that time. WKRP’s station manager Gordon Jump plays a bank manger. The blackmailer is Jonathan Banks. You might remember him as the wiseguy hitman from Beverly Hills Cop or the schizophrenic killer Reggie on Hill Street Blues. Lou Grant’s Robert Walden plays a football-crazed hotel manager. Soap’s Robert Mandan is on the suspect list. Then you have Jean Simmons and Gene Berry as the couple in need. It’s one of Perry’s better guest casts, indeed.

David Hall is an unbalanced horror writer with a twisted idea of justice. He has targeted four people he feels deserve some punishment and makes fun of them in his latest book. He then calls them to a hotel which he has booked exclusively for them. After a night of torturous pranks, Hall appears to have been tossed from a high bell tower. The witness is the hotel manager Susan Warrenfield (Delaney). Her grandfather built the hotel, and it’s said his spirit still walks the halls after his own suicide from, where else, the same bell tower 70 years earlier. Now someone is trying to scare Susan, and the Mason team turns into the Scooby Gang as they try to find out who killed David Hall. The arrested party is Jordan White (Stack), who calls Perry on the case.

This one has some spooky atmosphere, but it’s always portrayed as a trick. It’s Scooby trying to unmask the “ghost”. Paul falls a bit for Susan and starts to take the hauntings personally. There’s no shortage of suspects as they include a debunked psychic, astrologer and Hollywood scream queen. They all have motive as each were treated to the cruel pranks set up by Hall. Then there’s his personal assistant played by Star Trek: The Next Generation and The A-Team’s Dwight Shultze. Did he have a motive? Robert Stack was a client in an older episode of the show and returns as one this time.

Della used to babysit Tony (Baggetta) when he was a kid. Now he’s grown and married to Suzanne (Jillian). What he doesn’t know is that she used to be a hooker and a madam. He also doesn’t know that she’s decided to set up four bankers for blackmail. She invites them to her home for a power lunch, but she’s recorded their scheme to embezzle money from the bank. When she ends up dead, it’s Tony who takes the rap. Della begs Perry to take the case in spite of Tony’s obvious temper which keeps sabotaging the case.

Meanwhile Paul Drake is trying to pin down a call girl who worked Suzzane’s special lunch without knowing what was really going on. All she knows now is people are trying to kill her, and she keeps treating Paul as if he were one of them. She holds the key piece of evidence without knowing it.

Raymond Burr had chronic issues with his legs, much like his character Ironside. In this episode he lawyers mostly from a seated position and doesn’t take much of the action outside the courtroom. They use an assistant to present their evidence in court so Perry/Raymond can remain seated.

You get six reunion films on three discs. This dovetails right into the set that was already released last month. There is a third set that will continue the films from that point. CBS appears hard at work to get these films into your collection. Should we stop there? “Perry Mason doesn’t think so.”

Gino Sassani is a member of the Southeastern Film Critic's Association (SEFCA). He is a film and television critic based in Tampa, Florida. He's also the Senior Editor here at Upcomingdiscs. Gino started reviewing films in the early 1990's as a segment of his local television show Focus. He's an award-winning recording artist for Omega Records. Gino is currently working on his 8th album Merchants & Mercenaries. Gino took over Upcomingdiscs Dec 1, 2008. He works out of a home theater he calls The Reel World. Favorite films: The Godfather, The Godfather Part II, The Body Snatcher (Val Lewton film with Karloff and Lugosi, not the pod people film), Unforgiven, Gladiator, The Lion King, Jaws, Son Of Frankenstein, The Good, The Bad And The Ugly, and Monsters, Inc.
Original Gangster Graceland: Season 1